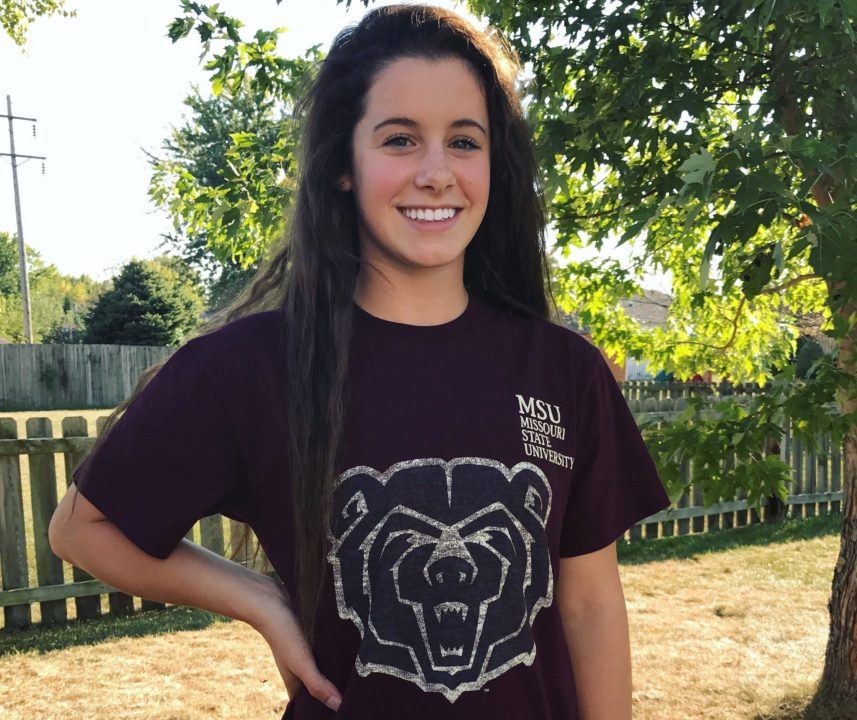 The Missouri State women have taken thirteen Missouri Valley Conference titles since 2003, and anyone following along would most likely... Current photo via Sydney Radloff

The Missouri State women have taken thirteen Missouri Valley Conference titles since 2003, and anyone following along would most likely agree that their biggest strength has consistently been their depth in the 200 and 400 IM. Even after graduating standouts Briana Horozewski and Lauren Pavel from podium positions in those events after the 2017 MVC Championship, the Bears will be losing no ground in their premier races with the help of yet another versatile athlete who can immediately make an impact when she steps on campus in the Fall of 2018.

Sydney Radloff is a multiple event finalist at Future and YMCA Nationals who currently swims for Coach Rob Busby and the Springfield YMCA Swim Team. To give readers an idea of her potential with the Bears, her times turned in from high school would already have earned her A-final positions in both IM’s, and scoring spots in both backstroke and both breaststroke events as well at the 2017 MVC Meet.  Sydney plans to major in Kinesiology and Exercise Science during while in Springfield.

“I chose MSU because the moment I stepped on campus and met the coaches and team, I knew it would be the right one. I trust the coaches and their philosophy to greatly improve their swimmers, and I fell in love with the team and the great atmosphere they had.  I can’t wait to be part of the bear family!! Go bears!!”