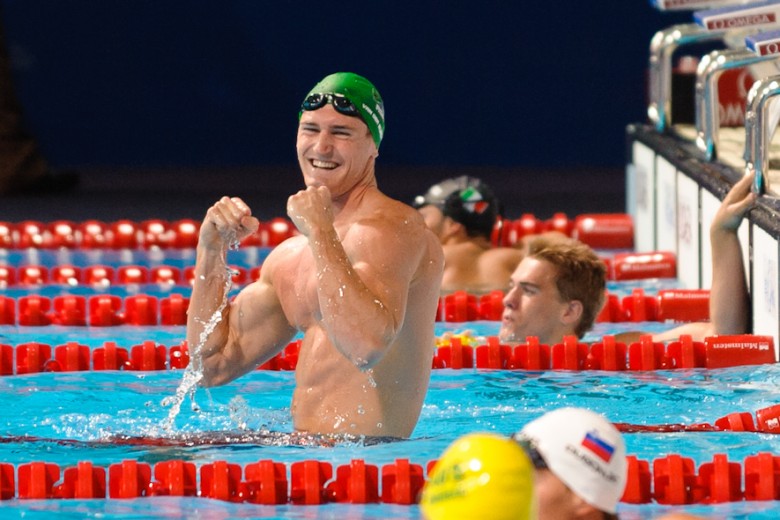 South African star Cameron van der Burgh first made his presence on the international stage felt at the age of 19 winning the 50 breaststroke at the 2007 Short Course World Championships. Since that time he has broken 13 world records, won Olympic gold in 2012 as well as collecting gold at the 2009 and 2013 World Championships.

Once an athlete reaches their ultimate goal it can be hard for them to have the same amount of passion they had getting to that point, “The wolf on hill is not as hungry as the wolf climbing the hill,” van der Burgh told SwimSwam.

Another challenge an athlete who achieves success at the highest level often faces is the demands that they are presented with outside of the pool. Those challenges include media responsibilities and obligations to sponsors, which is something van der Burgh has not been immune to, “After the Olympics my life changed a lot and I didn’t take the time to sit down and revisit how to properly balance my training and my life out of the pool. I was always trying to fit my training in around photo shoots and sponsor commitments”.

Everything came to a head in Glasgow. Even though he experienced success at the 2014 Commonwealth Games, winning gold in the 50 breaststroke and silver in the 100 breaststroke, before his races he felt a complete lack of passion and excitement, “I remember going into the final of the 100 breaststroke feeling like I was at Saturday morning training. Flat and low. Not motivated to race at all. I was injured and worst of all my head was in the wrong space. I came to the edge of quitting the sport. I was at a crossroad”.

Psychologist Doug Newburg, who worked closely with Jeff Rouse, discovered after studying several high performers that they all had one main thing in common; when faced with a significant challenge they revisited why they were doing what they did, reenergizing themselves before buckling down and going back to the hard work required to achieve their goals.

This is something that van der Burgh did after Glasgow, which paid dividends by the time he reached the 2014 Short Course World Championships in Doha, “I took the rest of the year off to do rehab on my shoulder and get my priorities straight,” said van der Burgh. “The time out of the pool made me miss the sport a lot and getting back in to race in Doha felt like my first World Champs again!”

“I sat down with all the people that have forged my career and we made the decision to go back to basics, put my head down and train”.

When talking about the advice he would give to an athlete who faces a similar circumstance van der Burgh describes how he regained a postitive mindset, “Remember why you started in the sport and what made you fall in love with it in the first place”.

“For me it was the feeling of getting back on the blocks and racing. The rush of hunting your opponents down in a final. Laying it all out on the line with no where to hide and no one to help. Only you verse him.”

A revitalized attitude and renewed enthusiasm will serve van der Burgh well as he must continue to face his newest rival, British star Adam Peaty. Peaty now holds both the long course 50 and 100 breaststroke world records, which were previously held by van der Burgh.

When asked about Peaty and his recent success the South African expressed the utmost respect for his competitor and his skills, “Loosing out to Adam on such small margins was disappointing of course. But the main gain that I made was learning. Over my career I have watched the races and techniques from many great champions like Oleg Lisagor, Brendan Hansen and of course the best of all time… Kosuke Kitajima.  It was great to swim next to Adam and learn what he does better than me. He is a great swimmer. One can never stop learning.”

Going into his third Olympic Games van der Burgh has the goal to once again hear the South African National anthem play while standing on the podium in Rio. With the success he experienced in London he has chosen to approach his preparation for the 2016 Games in the same way he did four years earlier, “I am approaching it the same way I did before London, which worked out alright for me. Why change a winning formula.”

Something that he hasn’t changed and has been consistent for much of his career is the partnership he has with coach Dirk Lange who is currently the Head Coach of the High Performance Centre in Graz, Austria, “We have a great relationship. I think what makes a world class coach is the balance between being your coach, mentor and friend. It’s a tight rope to walk, but he walks it perfectly with me”.

With Lange in Austria their relationship has been a long distance one over the last number of years with much of their communication occuring over Skype, “Unfortunately he lives in Austria. I love South Africa and if I moved I know I wouldn’t enjoy my swimming the same way I do now. We worked together each day in South Africa from 2004 to 2008. In that time he learned how I reacted to sessions very well and still does. He sends me the sessions each week and I have another brilliant coach on this side Emile de Bruin who helps me implement it”.

In his preparation one of the sets that van der Burgh uses on a regular basis is as follows:

For any athlete to be successful they must approach training and racing with a strong and confident mindset. After Glasgow van der Burgh realized that if he was to continue in the sport, nevermind continue to compete at the highest level, his mindset was going to have be adjusted. After taking the time to rediscover his love for the sport he is ready to once again challenge for the top spot on the medal podium in Rio.