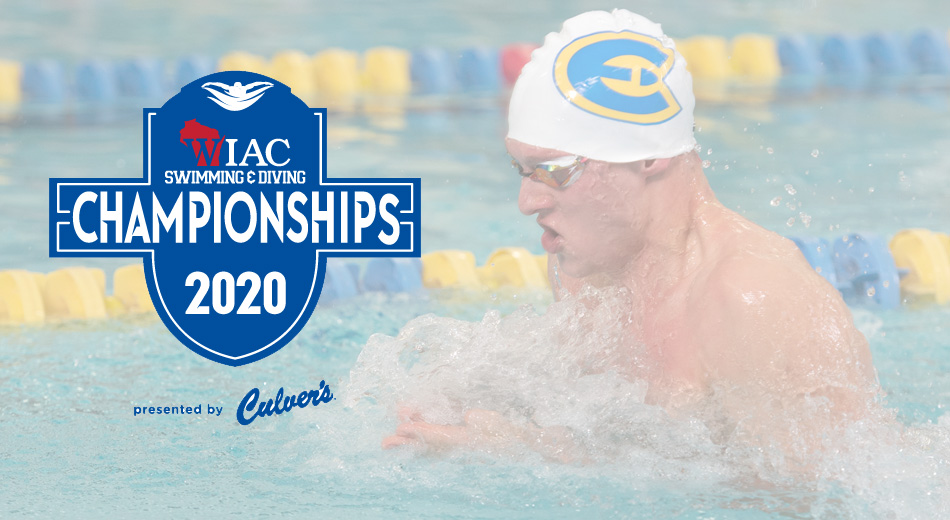 After breaking the WIAC Record, and becoming just the 2nd Division III swimmer in history to break 53 seconds in prelims of the 100 yard breaststroke, UW-Eau Claire’s Collin Miller went even faster in finals on Friday.

Miller swam a 52.38, re-breaking his own record and pulling himself within a second and a half of Andrew Wilson‘s Division III Record of 50.94. Miller’s best time coming into the meet was a 53.38, and he swam 52.75 in prelims on Friday morning.

That marked a 4th-straight 100 breaststroke WIAC title for Miller. He became just the 3rd male swimmer to have two four-peats at the WIAC Conference Championships, joining Dan Jesse, who won the 100 and 200 breaststrokes from 1977-1980. Miller already won the 200 IM on Thursday in 1:47.52, his 4th-straight title in that event as well, and also a new WIAC Record.

Through 13 events, the Pointers have totaled 634 points. UW-Eau Claire is second with 495 points, UW-Whitewater third with 381, UW-La Crosse fourth with 285 and UW-Oshkosh fifth with 221.

UW-Stevens Point claimed four individual titles and a pair of relay crowns during the second day of competition. Sam Young secured his second straight championship in the 400-yard individual medley with a time of 4:00.91. Payton Kilian was victorious in the 200-yard freestyle with a time of 1:41.86, while Alec Jeffers won the 100-yard backstroke with a time of 51.04 seconds and Jake Larsen had a first-place time of 49.57 seconds in the 100-yard butterfly.

Young and Kilian were also members of the triumphant 800-yard freestyle team that had a time of 6:51.77. They were joined by Will Lennertz and Jacob Aegerter. Kilian, Larsen and Aegerter teamed with William Buhler to win the 200-yard medley relay in 1:31.22.

UW-Eau Claire’s Colin Miller captured the 100-yard breaststroke for the fourth consecutive season with a time of 52.38 seconds. His time is the fastest in the NCAA Division III this season and established a conference meet record. Miller became just the second individual in league history to win the event four times, joining UW-Stevens Point’s Dan Jesse (1977-80).

An All-Sportsmanship Team was chosen for individuals that displayed exemplary sportsmanship throughout the season. It included one member from each school. Named to the squad were: UW-Eau Claire’s Jack Poppitz; UW-La Crosse’s Matthew Geils; UW-Oshkosh’s Cody Else; UW-Stevens Point’s Matthew Inserra; and UW-Whitewater’s Chase Searcy.

Competition at the three-day championship concludes on Feb. 15, with the prelims beginning at 10 a.m., followed by the finals at 6:00 p.m.

He made D1 NCAAs with that time!

He would have last year, where it took a 52.52 to get invited. We don’t know where that will land this year.

Too bad he can’t attend D1’s like back in the old days. I remember when Jim Borne did.