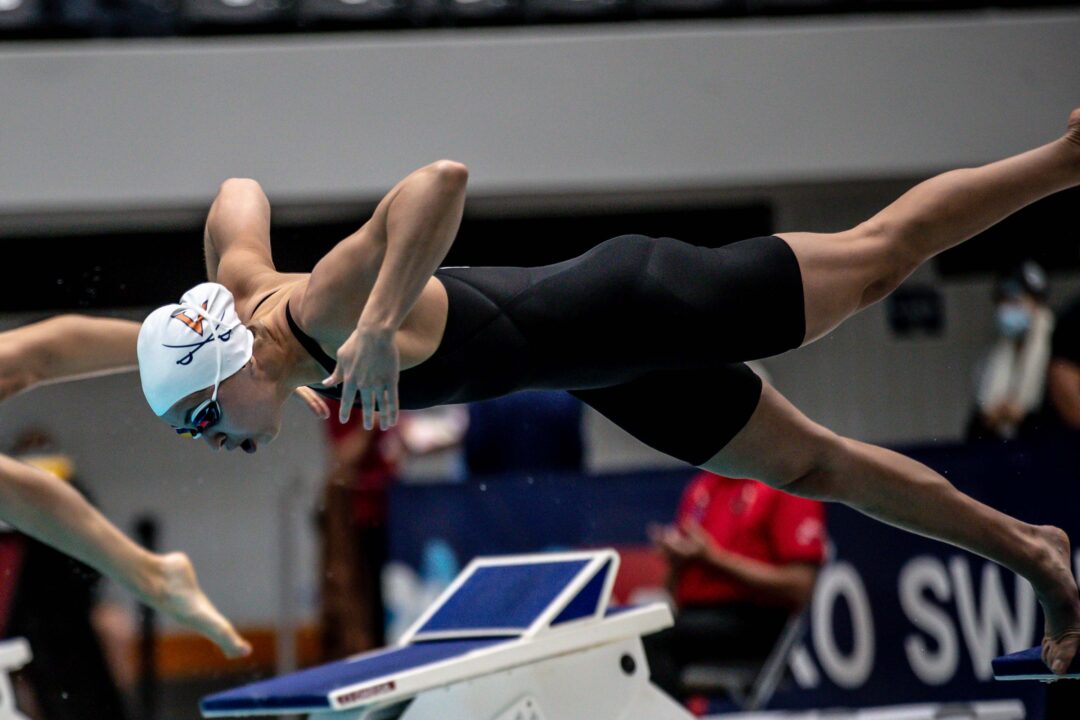 After a speedy dual meet Friday night, Cal and UVA opted to compete in non-traditional events like mixed relays, skins races, and a biathlon on Saturday. Archive photo via Jack Spitser/Spitser Photography

A day after putting up some pretty impressive (non-tech suited) times Friday evening, the Cal Bears and Virginia Cavaliers squared off again, this time option to forgo a traditional dual meet lineup in favor of some different events.

The action began with a 400 mixed medley relay. Mixed relays aren’t something we see in official NCAA competition, but have become more widespread at the international level, including at this summer’s Olympic Games. All 3 head coaches involved in the meet, Teri McKeever, Dave Durden, and Todd DeSorbo, were on the US Olympic staff over the summer, so they have some experience with making mixed medley lineups.

UVA tried to advantage of their relative strength on woman’s backstroke, and led off with Gretchen Walsh, who the night before went sub-52 in the individual 100 back. She wasn’t quite as fast Saturday, coming in just over 52 at 52.10. Noah Nichols split 54.43 on breast, followed by Max Edwards (48.09) and Kate Douglass (47.44), finishing just behind Cal at 3:22.06.

There was plenty of individual swimming in between those two events, as swimmers participated in a biathlon and/or a stroke 50s skin race. The biathlon events consisted of two rounds of either the 300 free or two rounds of the 300 IM, with the winner of each version determined by total time.

The skins races of 50s were interspersed, by stroke, throughout the day, and while we don’t have full results (just the fastest overall time for each stroke), we do have the official list of winners, by stroke:

The Cal men return to action next week at Utah, the Cal women’s next meet is November 5th at Utah, and UVA will host Army on October 30th.

Any chance of skins times through the rounds ?

“All 3 head coaches involved in the meet, Teri McKeever, Dave Durden, and Todd DeSorbo, were on the US Olympic staff over the summer, so they have some experience with making mixed medley lineups.”