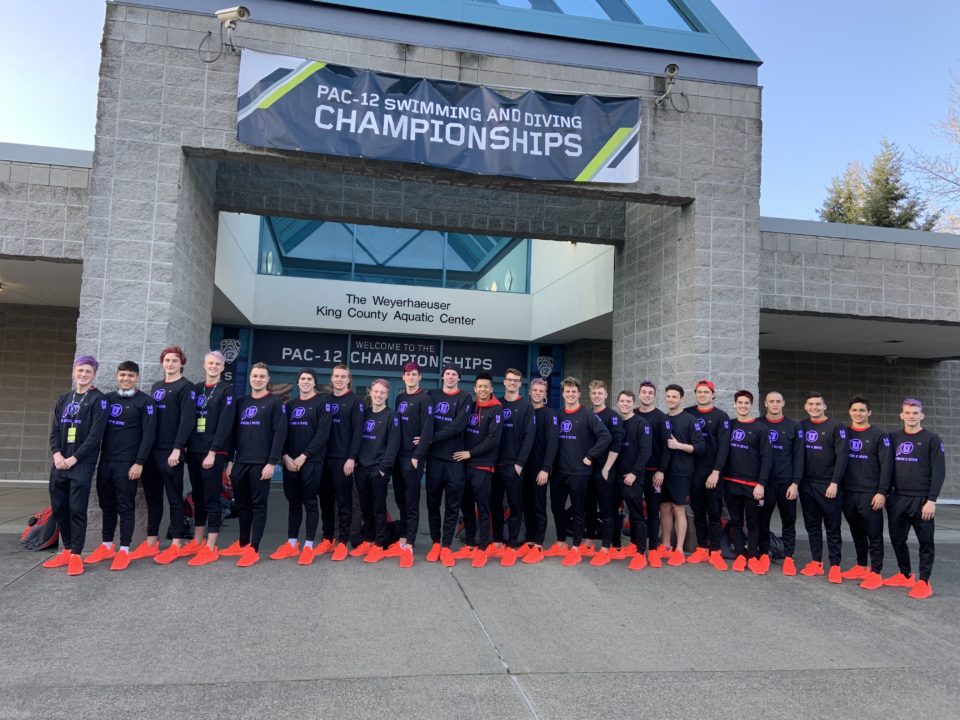 Over the past few weeks collegiate teams have been competing in their conference championships. A long season of countless hours practicing with your teammates and coaches leave them as your biggest supporters, granting you encouragement as you get ready for your final races.

However, for the Utah men’s swimming team, they gave huge support throughout the year to their swimmer who was unable to compete at this year’s championships.

Utes Freshman, Matt Wilcox, was diagnosed with Testicular Cancer in October of 2019, keeping him out of the pool for the rest of the season. Prior to college he swam for the Walnut Creek Aquabears club team. Wilcox came to Utah to study mechanical engineering and had hopes of qualifying for the Olympic Trials this summer.

After surgery at the Huntsman Cancer Institute on the campus of Utah, he was able to finish classes first semester while blood tests originally showed he was cancer free.

Upon arriving back at Utah from his hometown in Martinez, California to start spring semester, new blood tests showed the cancer had returned and was to start treatment with chemotherapy. He is currently receiving treatment at the Stanford Cancer Center.

First being diagnosed in October, Utah’s coach Joe Dykstra had Testicular Cancer Awareness bracelets made up for the team to wear on their wrists or water bottles. Dykstra would FaceTime at the end of every meet to talk about it with Wilcox and have him lead in the team’s cheer. Teammates gave him rides when he was recovering from his surgery.

“The team really made an effort to include me in as much as possible, even when I physically was not there,” Wilcox said. “My coaches showed nothing but kindness and understanding for what I was going through and encouraged me to heal and come back.”

In the run-up to the Pac-12 conference meet, Dykstra and team captains Brody Lewis and Colten Montgomery came up with the idea to wear shirts to honor Wilcox. The shirts feature the ribbon color purple for Testicular Cancer and feature his initials on the sleeves (shown in the featured image). Some of the swimmers even dyed their hair purple for the meet and his roommate shaved his head in support.

“Since getting diagnosed it’s been easy for me to feel isolated from the team.  Thanks to Coach Joe, the swim staff and all my teammates, their acts lift my spirits when I need it most and help me feel like I still belong in Utah.”

Matt Wilcox at the Infusion Center at the Stanford Cancer Center. Matt wants to be an advocate for men’s health awareness, especially Testicular Cancer, mental health and body positivity.

Utah’s men’s team just competed at the Pac-12 Championships where they finished fifth. As previously mentioned, Wilcox originally wanted study mechanical engineering but now considers studying medicine after this journey. A link to his GoFundMe page can be found here.

Thanks for sharing! Stay strong Matt!

The swimming community is such a tremendous group, and this team exemplifies that. We’re cheering for you, Matt!

I am a bit hesitant to post here as I am very close to Matt. We can’t say enough good things about the U of U Swim Program. Coach Joe, the Staff and Matt’s teammates, we are truly grateful. Their support and the experiences Matt has had go way beyond what can be shared in a post. Great Program. Great Team, Great People. GO UTES !!!