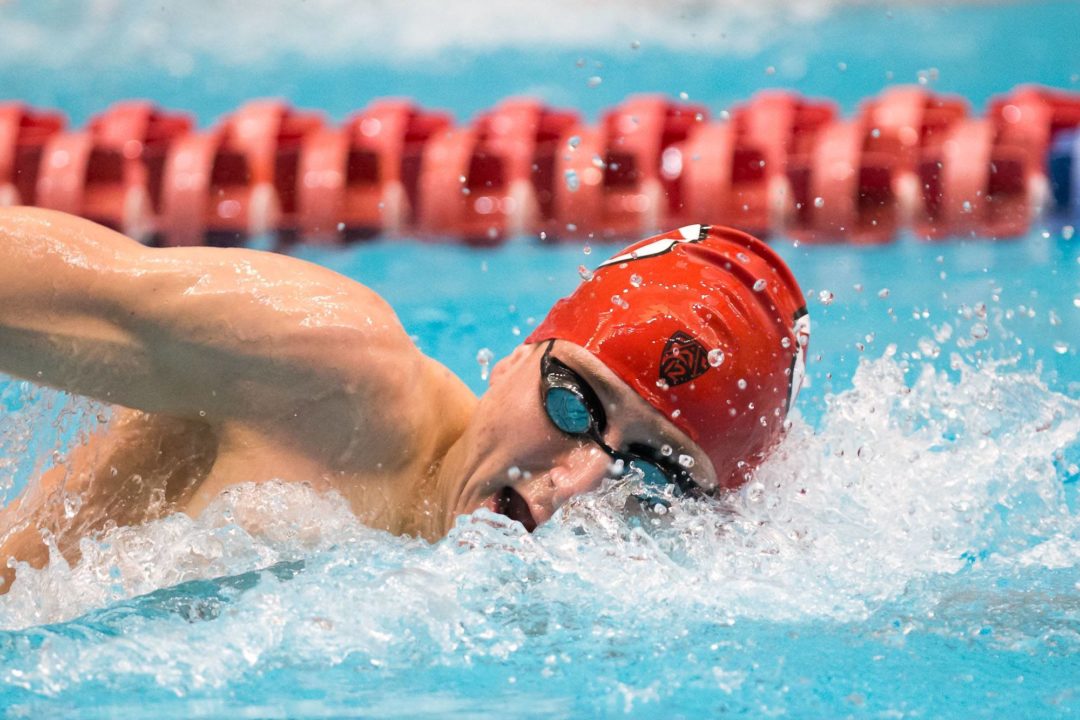 Utah's Nick Soedel was the swimmer-of-the meet as Joe Dykstra's first win with the Utah men was a big one. Archive photo via Tim Binning/TheSwimPictures.com

The Utah Utes spent the last week on a brief fall training trip in Hawaii. No results were available from their meet in Hawaii, but people we spoke with said that the men’s team in particular looked very good.

They apparently weren’t lying, as the Utes earned the program’s first ever victory against Arizona when the men won an incredibly-narrow 152-148 meet in Utah. The women’s meet was not quite as hotly-contested, as Arizona romped to a 204-96 victory of their own.

That meant that in the very first meet at the helm of the Utah men, new head coach Joe Dykstra got a win against the team that finished 5th at NCAA’s last year. That’s a huge confidence-booster.

This meet was a good, solid in-season college dual meet, in that neither team put up times that were all-that-fast, but both times had to scrape for every point in a meet that came down to single-digits.

Arizona opened up the day well. They began with a win in the 400 medley relay in a time of 3:19.33. That’s an event in which they’re the defending NCAA Champions, and they were led by a 54.34 breaststroke leg from their NCAA Champion Kevin Cordes and a 48.20 from All-American Giles Smith on the fly leg.

Brian Stevens was the option here as the freestyle anchor, the one leg they graduated from last year’s team. He split a 46.80 on that final leg, which was nearly three-seconds slower than Utah’s Nick Soedel, who was a blistering 43.97.

That freestyle may continue to be a question for the Wildcats all season long, as we’ve been told that Arizona is still working through the NCAA hurdles with ace junior college transfer Bradley Tandy.

But after that 200 free, it looked like Arizona might really be pulling away in the scoring. Michael Sheppard won the 100 back for Arizona in 50.17, and though Kristian Kron from Utah took 2nd, the Wildcats won the event 14-5.

Back to the breaststroke, which is a discipline where Arizona should be dominant, they couldn’t hurt Utah too bad. Cordes won handily in 55.86, but with nobody else under 59 seconds, Utah was able to squeeze 6 points out of their group, including senior Ken Tiltges in 59.06. Arizona’s Kevin Steel, who was on the American World Championship team this summer and was the NCAA runner-up in the 100 breaststroke, swam only a 1:01.5 to open his season.

The Wildcats won their third-straight race, with South African sophomore Michael Meyer taking the 200 fly in 1:52.46, but Utah again limited the damage by taking 2nd, 3rd, and 4th places in the event.

In the next two swimming events, however, Utah struck back with their best swimmer, Nick Soedel, who on the men’s side was easily the most impressive swimmer at this meet.

First he won the 50 free in a 20.20, which is about two-tenths of a second faster than he was at this time last season. Then Utah got a win on the 1-meter from Josiah Purss with a score of 362.93, beating out Arizona platform-specialist Rafael Quintero by nearly a 30-point margin, Soedel came back again to win the 100 free.

His time was a 44.47: tied for the second-fastest in the Pac 12 this season. He was far ahead of the rest of the field, which had Arizona’s Giles Smith as a runner-up in 45.40, and another Arizona senior Jef Amlee 3rd in 47.82. A 2-3-4 finish from Arizona stemmed the comeback of the Utes for a bit, but Utah just kept coming with a Kristian Kron win in the 200 back next (1:47.72 – two-and-a-half seconds better than Sheppard).

Just as the scoring was closing up, Arizona started to extend their lead again in the 200 breaststroke. There, Cordes won in 2:01.30, and his teammate Eric Solis took 2nd in 2:09.51. So, while Utah was chipping away at the Arizona lead by a few points here-and-there, Arizona would take a huge surge forward again (they won that event 14-5).

Arizona had a chance to seal the meet in the 200 IM with a win, but the sophomore Kron again showed some intestinal fortitude with a 1:51.82 victory – going out very hard, but still having enough to close in a 25.86 freestyle split.

That meant Arizona had a 5 point lead going into a winner-take all 400 free relay. Just as we mentioned at the beginning, Arizona has a hole in their sprint group this season, and it was glaring in this race. Utah opened up a three-second lead at the halfway point (Soedel had a 44.53 leadoff), and even a solid 45.72 anchor from Matt Barber for Arizona didn’t make this race close.

Utah almost went 1-2 in the race (their B-relay was half-a-second behind Arizona’s A), but they wound up 3rd: enough to avert a tie. And thus it was in the books.

This was a classic dual meet. The times weren’t necessarily great anywhere (though Soedel, as mentioned, stood out), but it was good racing where the 4th-and-5th place finishers were counting in the outcome. This is the kind of outcome that is good for college swimming.

The first race of the women’s meet actually appeared as though we might get a pretty tight meet as well, with the Arizona women touching 1st in 3:46.65 and Utah taking 2nd in 3:46.93. The best splits of that relay included a 56.0 leadoff backstroker for Zona sophomore Bonnie Brandon and a 55.0 for Utah sophomore Petra Soiminen.

When examined more closely, though, Arizona swam that relay without Margo Geer, the best sprinter in the country a year ago, and still got an event win.

Again, in the 1000 free, Utah kept things interesting, as senior Sami Zuch won in 10:24.38, ahead of Arizona junior transfer Lauren Neidigh in 10:33.01. Again, though, they were without their best 1000 freestyler, Brandon, in that event.

We know that this isn’t the biggest or the deepest Arizona team we’ve ever seen, which means that they’ll give up some races to a solid team like Utah.

But after not using Geer in the first race or Brandon in the 2nd race, we knew that Arizona was loading up to unleash and take control of this meet.

From there, the rout was on, though a few good races still popped up at different points on the schedule.

Emma Schoettmer won the 100 breaststroke in 1:04.24; she and Utah freshman Stina Colleou actually had identical back-half splits, but Schoettmer went out a bit faster to take the race by about three-tenths.

Arizona got more big scoring contributions from transfers in the next race, the 200 fly. There, senior Ashley Evans (not a transfer) won in 2:01.97, but runner-up honors went to junior transfer Elizabeth Pepper, already a two-year NCAA qualifier, with a 2:02.59.

Then it was back to Brandon (she sat out the final relay, meaning she also got three individual events) who won the 500 free in 4:57.38.

Arizona, having loaded-up in the middle of the meet, ran out of bodies a bit when the 200 IM rolled around, leaving Utah freshman Kylie Boyce to take the win in 2:08.75.

In the meet’s final race, Arizona coasted to a 3:24.73 win in the 400 free relay. The splits are a bit interesting, if the relay order as listed on the official results is accurate: Geer led off in just a 52.23, two seconds slower than she was in the individual, but senior Gracie Finnegan split a 49.75 on the second leg. Given what we saw from most of the swimmers in this meet, if Finnegan can continue to swim at that level on relays, Arizona will have a solid number two for their sprint group behind Geer.

wonder how much the altitude was a factor? but still…..Arizona was bad and not much depth. congratulations to Utah staff and team

Ouch, that was ugly by the Arizona men. Kevin Steel exemplified the theme of this meet. 1:01.5 for a guy that good???

Where’s Psychodad? If he thought a probable non scholarship swimmer from Texas is “just terrible” with a 2:13 200 Breast, what would he think of a 1:01 here?