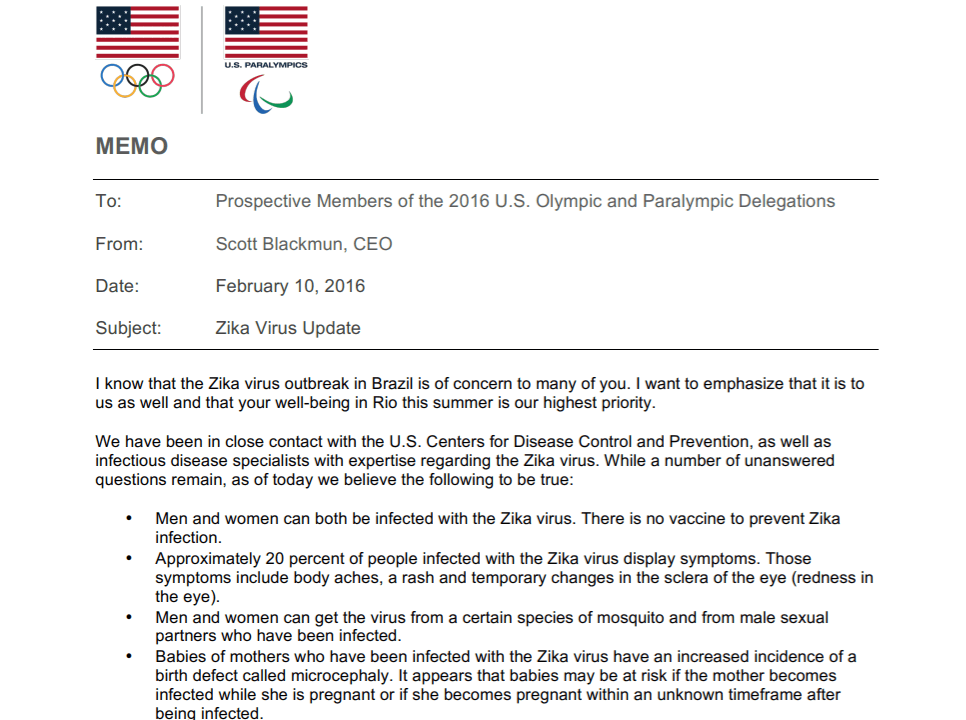 The USOC has hired two specialists to assist with understanding athlete risk concerning the Zika virus, and has also issued a memo to all prospective U.S. athletes concerning outbreak concerns. Current photo via http://www.teamusa.org/Rio-Travel-Updates

In the latest step taken in response to the Zika virus outbreak in the geographic region surrounding Rio de Janeiro, Brazil, the site of the 2016 Olympic Games, the United States Olympic Committee (USOC) has hired two infectious disease specialists to consult on the matter.

In addition, just yesterday, February 10th, USOC CEO Scott Blackmun sent an open memo addressed all potential Olympians acknowledging the growing concerns regarding the virus, known to be carried via mosquito and linked to a specific birth defect. “I know that the Zika virus outbreak in Brazil is of concern to many of you,” the memo reads. “I want to emphasize that it is to us, as well, and that your well-being in Rio this summer is our highest priority.”

The letter to prospective U.S. Olympic roster members also says that,  “no matter how much we prepare … there will always be risk associated with international competition. Each country, each venue and each discipline will present different risks and require different mitigation strategies.”

For most of the world’s general population, the Zika virus results in rashes, joint pain, conjunctivitis and fevers. However, pregnant women or those women considering getting pregnant run the risk of the Zika virus causing microcephaly, the birth defect rendering the baby born with an abnormally small head.

The USOC’s letter comes just days after conflicting reports about what the Committee has heretofore communicated to the nation’s federations.

As reported by Reuters, the USOC communicated via conference call in late January that the “athletes and staff concerned for their health over the Zika virus should consider not going to the Rio 2016 Olympic Games in August.”

According to Inside the Games, however, the USOC has denied it told athletes and staff concerned about the Zika virus that they should consider not attending this year’s Olympics in Rio de Janeiro. Instead, the organization reportedly said they ‘simply briefed participants before distributing guidance issued by the International Olympic Committee (IOC).’

Ongoing, the USOC will post updates to its website at USOC.org/RioTravelUpdates and athletes are encouraged to seek their personal physicians or their delegation’s chief medical officer for additional information.

You can read the Blackmun’s letter in its entirety here.

This is insane. Absolutely unbelievable. There is no way this should put on the athletes. They are far, far too invested to make an objective choice. A decision to go or not go based on risk to health to the Zyka (Zika?) virus is the responsibility of the governing body – in this case, the USOC – and nobody else. They are abrogating their responsibility in this particular instance in a very, very cynical, cowardly way. (Don’t think for a moment that NBC hasn’t been on the phone doing pressuring the h*ll out them to ensure a US presence there!) The governing body’s responsibility is go or no go. It’s not “Well, we think you’ll be OK but it’s up… Read more »

This is a fluid situation. If I were a potential Olympic athlete I would want as much information as possible. I do agree in some sense that as we get closer to the games, the USOC may have to make the tough call, based on the information available at that time.

I do find it distressing that physical security is taking a back seat to health concerns at the Rio games. Either this should have been considered in the selection process or the money was changing hands to fast to notice.

Fear. Fear. Fear.
As usual.
Last time it was Ebola. In USA do you remember all the noise made by some of your media and some of your politicians (always the same side) just to frighten people?
Did you know that the flu killed between 250000 and 500000 people each year in the world?
And it never makes the headlines!
It’s simple.
Pregnant womens, don’t go to Brazil.
And dear athletes, please don’t have this time the sexual relations you used to have at each olympic games in the olympic village. 😆