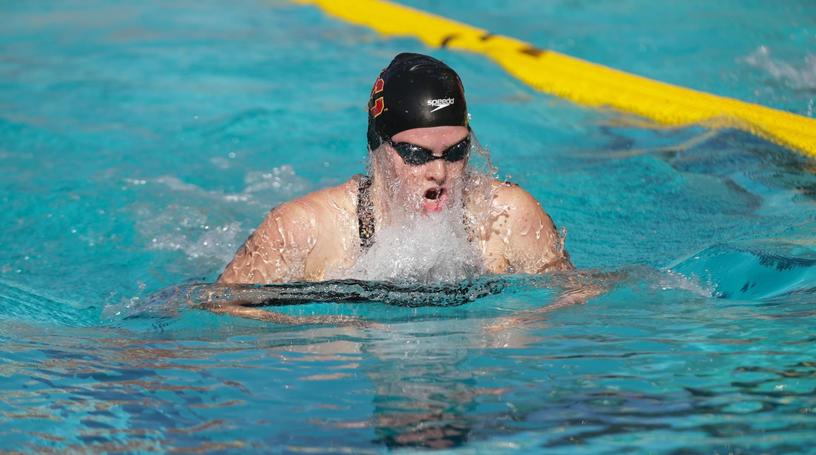 The visiting USC Trojans handed the Arizona men’s and women’s teams a pair of Pac-12 conference losses on Friday at the Hillenbrand Aquatic Center in Tucson.

USC grad transfer Calypso Sheridan swam away with two titles in the women’s meet, while Alexei Sancov and Sean Wang were double event winners for the men.

Sancov began with an anchor of 43.56 on the winning 400 medley relay. He was teamed up with backstroker Evangelos Makrygiannis (48.39), breaststroker Trent Pellini (53.67), and butterflyer Nikola Miljenic (47.25). Sancov led a 1-2-3 Trojan finish in the 200 free, stopping the clock in 1:38.20. Max Saunders and Victor Johansson were next to the wall. Sancov also was the winner of the 100 fly (47.83), with teammates Jackson Odgers and Pellini coming in second and third.

Wang won both the 1-meter and 3-meter diving events.

Arizona diver Delaney Schnell won both the diving events in the women’s meet. Amalie Mortensen led a 1-2 Wildcats finish in the 200 free with 1:48.66; she was followed by teammate Felicity Passon.

Good to see these dual meet results for the Trojans against Arizona and Arizona State because now USC can move out of next-to-last position in the Pac-12 and get back to competing with in-state powerhouse rivals California and Stanford.
The infusion of new and old (super senior) talent has been productive. But the downside is that it’s heavily dependent on experienced Senior and Grad talent as well as foreign talent. I hesitatingly look at the latest high school class of 2022 and 2023 signees and except for Kozan and Hodges, not a lot of high school supers signing with the Trojans.

Transfer portal and international athletes are a good source of elite talent, but ultimately it needs the… Read more »

UofA sucks. What a fall

Ya love to see it✌️