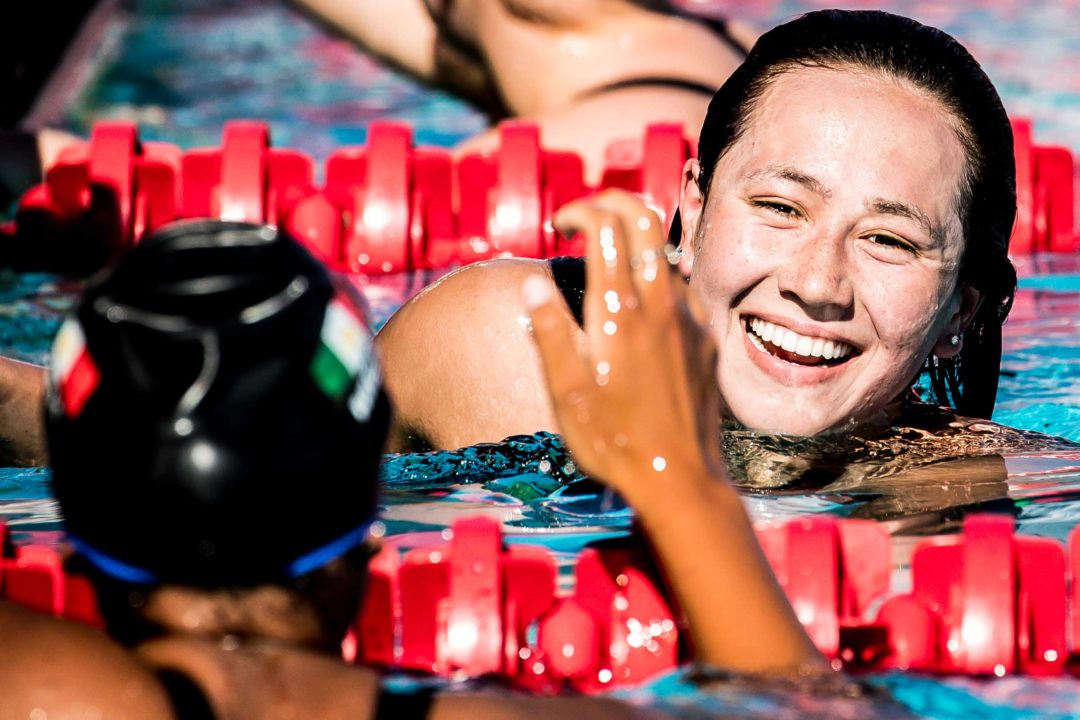 With both USC head coach Dave Salo's departure and the Olympic postponement, the rising distance star has some big decisions to make. Current photo via Jack Spitser/Spitser Photography

In light of the Olympic postponement, United States National Team member Erica Sullivan is waiting to see who USC will hire to replace outgoing head coach Dave Salo before confirming she will enroll next fall.

Sullivan graduated high school in 2018 and committed to USC, deferring her enrollment a year to focus on training for Tokyo. Salo announced in January that the 2019-20 season would be he last with the program, also leaving the fate of his associate head coach and the U.S. Olympic open water head coach Catherine Kase up in the air.

Now that the Games are pushed back a year and her future coaching staff is uncertain, Sullivan told SwimSwam she has “no idea” what her college plans are.

“Normally I would be okay with going to school and trusting the staff to give me the training I need, but since I am still in the dark about who my coach will be at USC, I don’t want to put anything in stone,” Sullivan wrote in a message. “I’m probably gonna wait until they announce who the coach is and then make some decisions. I wish I could you that I’m leaning in a certain direction, but I’m really not. Definitely have some big decisions to make when news is announced.”

Sullivan, 19, has long been a contender in open water, but finished third among Americans in the 10K at 2019 Nationals — a spot away from making the 2019 FINA World Championships team (then the top 10 finishers at Worlds made the Olympic team). But recently, Sullivan has surged in the pool, putting her squarely in the running for a berth in the 1500 when it makes its Olympic debut next year.

She owns a 15:55.25 lifetime best from June 2019 (one of three U.S. women under 16 minutes in the last two seasons) and her 16:01.71 from the Knoxville Pro Swim Series stops in January makes her the second-fastest American this season behind only Katie Ledecky. The Knoxville swim leaves her nearly 10 seconds ahead of No. 3-ranked Ashley Twichell.

This new hire will be interesting.

Surprised we haven’t had any rumors floating around yet.

Let’s get rumoring, who do people think? Ray looze makes sense since he went there but would he leave indiana? Most of his studs are pros who may move to southern cal very happily. Catherine Vogt also has to be considered. Can’t think of any other obvious ones

Pro money goes a lot further in Bloomington then so cal

Jeremy Kipp at Northwestern or Lars Jorgensen at Kentucky (His brother Dan swam there) could be names to consider with ties to USC.

I’d say give Kipp a few more years at Northwestern first, they were decent this year but but we haven’t really seen what he can do with a combined team yet.

I agree. They’re definitely on the rise and I’m sure Kipp would want to see such insane recruits like Burdisso and Houseman all the way through.

That didn’t age well at all…

Where is the SwimSwam rumor mill?