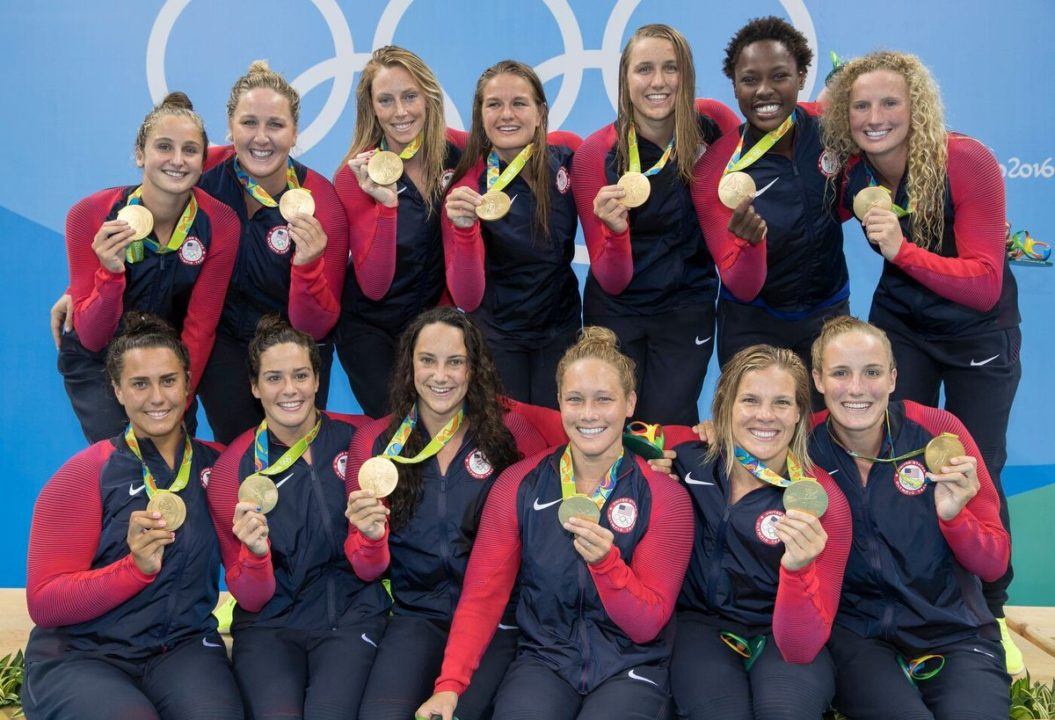 The energy, efficiency, and depth of the United States Olympic Women’s Water Polo Team were on display in the final match as Team USA defeated Italy, 12 to 5, to become the first woman’s team to win consecutive Olympic gold medals.

The U.S. never trailed Italy, and jumped out to the early lead with a long shot from Courtney Mathewson with 6:49 to go in the first. Italy’s Federica Radicchi evened the score at 5:35 on the clock, before Kiley Neushul put the U.S. up 2-1 with a long shot a minute later. Both teams showed strong defense during the quarter, especially on power plays. Italy was trying to prevent the ball from getting inside 2 meters and matching up their best player with the U.S.’s Maggie Steffens, the top scorer of tournament so far. Kami Craig and Makenzie Fischer netted two for the Americans just at the end of the first period to put the U.S. up 4-1. Goalkeeper Ashleigh Johnson seemed to gain confidence with each passing minute, saving 4 of 8 shots in the first period while Italy’s Giulia Gorlero stopped 1 of 6.

Radicchi cut the U.S. lead to two goals with a great wraparound shot with 5:32 to go in the second period. Rachel Fattal answered with a goal to put the U.S. up 5-2. Roberta Bianconi took advantage of an offensive foul by Fattal to connect with 59 seconds left in the quarter, pulling Italy back within two goals. The U.S. tried to score in the final seconds of the period but the score remained 5-3 to the Americans at the half.

The U.S. were much more aggressive offensively in the third period. With Italy doing a great job of taking Steffens out of the offense, the rest of the Americans’ deep bench stepped in. Fattal, in particular, was a key asset for the U.S. offense. She scored her second goal on a pass from Neushul with 7:11 to go. At the 4:47 mark Steffens fed Neushul a great pass, and suddenly the U.S. was up 7-3. Perhaps the most pivotal moment in the match came with 4:29 left in the third, when Johnson blocked a Bianconi penalty shot. The Americans continued to rally, adding an eighth goal with a Fischer assist to Seidemann at 2:42 on the clock. Giulia Emmolo nailed a left-handed skip shot to the near side to cut the U.S. lead to 8-4 with 1:44 left to play. Steffens scored her first goal of the match with 15 seconds to go. It was her 17th goal of the tournament, out of 23 shots.

Fischer opened the fourth quarter with a goal from beyond 5 meters to put the U.S. ahead 10-4. Craig drew a penalty with 5:20 on the clock, and Maddie Musselman nailed her shot to give the U.S. a 11-4 lead. Goalkeeper Sami Hill came in to replace Johnson with 2:32 left in the game, and had a couple of big saves right away. Neushul scored her third goal with 49 seconds to play, then Tania di Mario, Italy’s top scorer in the tournament, put one in the corner of the net, right over Hill’s shoulder, with 28 seconds on the clock. The final score was 12-5 to the United States.

The Russian Federation won the bronze medal in a penalty shoot-out, defeating Hungary 12-12 (7-6). It was a thrilling match, with numerous lead changes throughout. Tied at 3-3 at the end of the first quarter, the teams were never separated by more than 1 point until the fourth quarter. Russia led 7-6 at the end of the second; Hungary was up 9-8 at the end of the third. After Russia pulled even early in the fourth, Hungary went up 11-9. Russia tied the game at 11-11, then Hungary led 12-11 until Russia scored on a 6-5 with 1 second left on the clock. Russia and Hungary both scored on their first six penalty shots. After Russia hit their seventh, goalkeeper Anna Karnaukh saved Hungary’s final shot and Russia earned the third step of the podium. Nadezhda Glyzina led the Russian Federation with 5 goals; Barbara Bujka scored 3 for Hungary.

How many Gold Medals does Stanford get added to their tally (among universities) for winning the women’s WP?

One day our men’s program will be just as dominant!