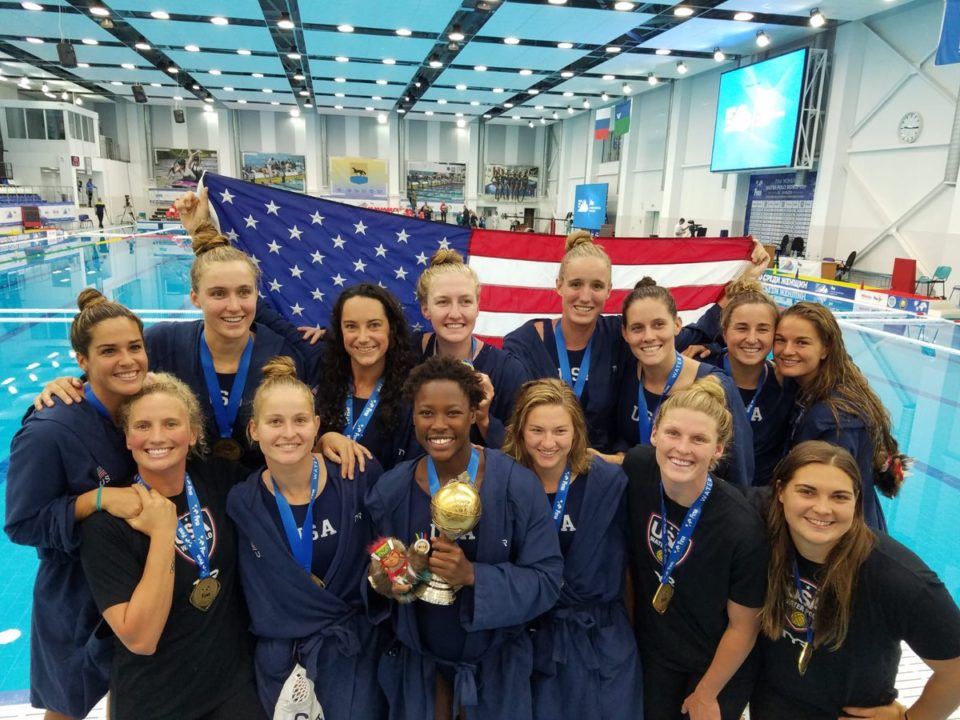 The USA Women's National Team won the FINA World Cup title for the third straight time and maintained their hold on all major FINA championships following an 8-5 win over Russia. Current photo via USA Water Polo

SURGUT, Russia – The USA Women’s National Team won the FINA World Cup title for the third straight time and maintained their hold on all major FINA championships following an 8-5 win over Russia. The World Cup gold joins titles in 1979, 2010 and 2014.

Maggie Steffens (Danville, CA/Stanford/NYAC) scored three goals in the final and was named Most Valuable Player. Ashleigh Johnson (Miami, FL/Princeton/NYAC) did the job in net making 11 saves and was named top goalkeeper. To watch a full replay of the match click here to visit FINA TV (subscription required). For all other match replays, click here.

Aria Fischer (Laguna Beach, CA/Stanford/SET) got Team USA off to a 1-0 lead in the first before Russia tied the game moments later at 1-1. Paige Hauschild (Santa Barbara, CA/USC/Santa Barbara 805) found the back of the net with just four seconds left in the quarter to put the United States back in front 2-1.

In the second quarter Team USA expanded their lead to 5-2 by outscoring Russia 3-1. Steffens started the scoring followed by a Jamie Neushul (Isla Vista, CA/Stanford/Santa Barbara 805) tally for a 4-1 lead. Following a goal from Russia, Makenzie Fischer (Laguna Beach, CA/Stanford/SET) closed out the scoring in the half with a goal with 2:35 left.

Steffens scored in the first two minutes of third quarter and came back with another goal in the final two minutes of the quarter to give the United States a 7-3 lead going to the fourth. Jamie Neushul delivered on the counter attack in the fourth to push the USA advantage to 8-3. Russia would add two more goals, including one with less than a minute left, but it would not factor in the decision.

Team USA went 3/5 on power plays while Russia went 3/10 with neither side attempting a penalty.

This has got to be one of the most impressive runs in the history of WP!
Congrats to TEAM USA — ready for 2020!