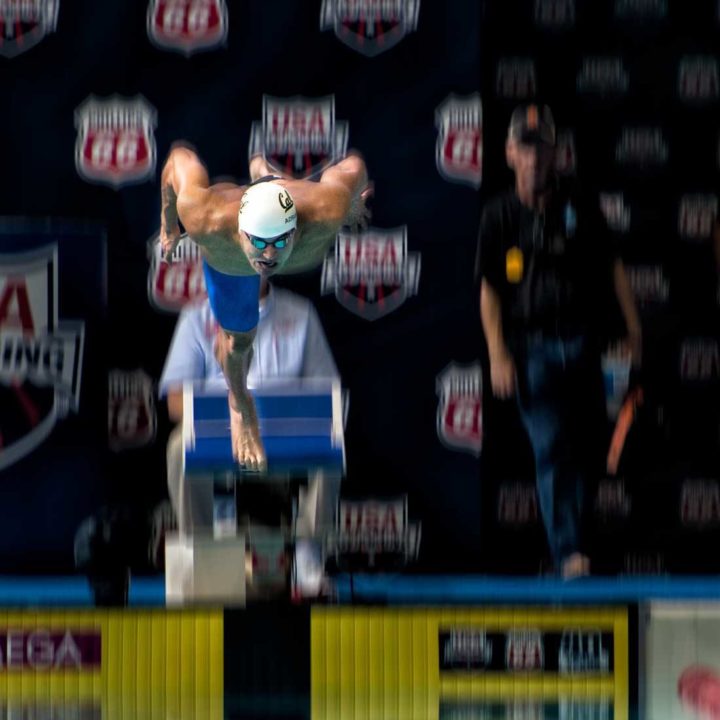 USA Swimming has officially released its qualifying standards for the 2015 Winter National Championships, with many time cuts dropping by significant amounts in a pre-Olympic year. Archive photo via Mike Lewis/Ola Vista Photography

USA Swimming has officially released its qualifying standards for the 2015 Winter National Championships, with many time cuts dropping by significant amounts in a pre-Olympic year.

As USA Swimming gears up to select its Rio 2016 Olympic team, the cuts have gotten much faster in over half the events, which should lead to a smaller, more exclusive meet. This comes after the cuts stayed exactly the same from the 2013 Winter Nationals to the 2014 version of the meet.

We haven’t heard official word on whether the 2015 Winter Nationals will be conducted in short course yards or long course meters, given that it’s the last national meet before the Olympic Trials. The time standards list the distance free events with their long course distances (400, 800, 1500), suggesting that the meet will be long course. SwimSwam has an inquiry in with USA Swimming to confirm the course.

(Update: USA Swimming has confirmed that the meet will be conducted in long course meters.)

The qualifying period began last November 1 and runs through the meet’s entry deadline.

You can view the standards here, or in the table at the bottom of this page.

The standards stayed the same in a few places compared to last year:

The cuts that got faster:

But while not every event dropped in time, the ones that did drop moved down drastically. Some races saw the cut lowered by more than a second per 100. The women’s 400 IM in short course dropped just under seven and a half seconds and the women’s 1650 free by almost 10.

This should have two major impacts that come to mind immediately. First, (1) it should drastically reduce the size of the meet, which is likely USA Swimming’s way of catering a bit to its more elite athletes in the year leading up to U.S. Olympic Trials. The other is that (2) it will give college teams some more interesting decisions as to whether to schedule in Winter Nationals as a team or not. Where in previous years, many teams would bank on Winter Nationals as their mid-season rest meet, this year’s cuts might make it difficult to bring a full team, forcing schools to either take a split-squad approach in combination with a different winter invite, or choose to skip the event entirely.

Below, we’ve got the cuts themselves, plus a table listing how much each cut dropped from its 2014 counterpart. You can view the 2014 cuts here.

Time standards that remained the same are marked with an “x.” The amount listed is how much faster the 2015 cut is compared to the same event in 2014.

Is it published where the meet will be held?

Meet will be long course and has to be smaller since you can only run 1 course.

Too bad they didn’t make such strides with Olympic Trials cuts.