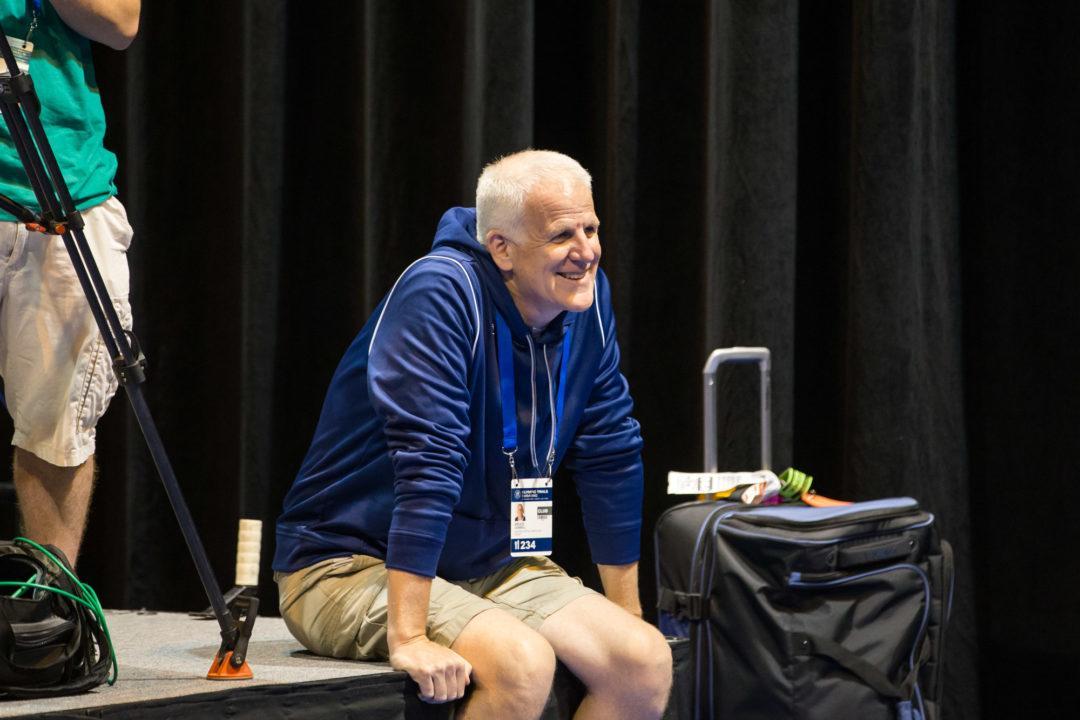 Though the official National Team rosters haven't dropped yet, USA Swimming has announced its National Team Coaches for the 2016-2017 season. Archive photo via Tim Binning/TheSwimPictures.com

Though the official National Team rosters haven’t dropped yet, USA Swimming has announced its National Team Coaches for the 2016-2017 season.

The criteria for being named a National Team coach is both simple and complex. Any coach who places an athlete on the national team is honored as a national team coach. That’s the simple part. Of course, it can get complicated trying to define who is a given athlete’s “primary coach” at any given point, especially with the trend of swimmers training with one club while officially representing another.

USA Swimming has some guidelines for determining and defining coaches, and you can view those here. (Though the version listed on the USA Swimming website is still the 2015-2016 definitions, they aren’t expected to change very drastically). The main takeaway is that USA Swimming works to include the coach who actually writes and runs the workout for each athlete, instead just the head coach of whatever club the swimmer represents nationally. There can also be multiple coaches added for the same athlete, with different classifications for the athlete’s college coach, current coach, developmental coach and so on.

The National Team coaches are eligible to earn bonuses through the Coach Incentive Program. Coaches earn bonuses when their athletes earn medals at USA Swimming’s Operation Gold meet for the year. That’s typically the major focus meet for the national team; last year it was the Olympic Games and this coming year it will likely be the 2017 World Championships.

You can read about the coach incentive program (again, the most updated version is from 2015-2016) here.

Four women. Why is it so? Could US Swimming benefit from more female coaches? Or is men better as swim coaches?

Most of the coaches on the list are college coaches, and there are very few head coaches that are women. Interesting that Meehan didn’t dual and give Tracy credit for Simone, Maya, and Lia. But then again not surprising at all…

NO, there are many fabulous women who could and have been phenomenal coaches. Unfortunately, it comes down to balancing job and family. I have numerous former teammates who have either been head or assistant coaches at the college level. If you want to start a family, it is very difficult to do so while being a swim coach. Ultimately, this is why they told me they left the sport. The demands of early mornings, travel, and recruiting are very difficult to handle if you have young children at home. Yes, you can hire a nanny for your children while they are young and not in school yet. However, you soon learn that there are many moments you will miss of… Read more »

You said it eloquently. It isn’t that they can’t coach at an elite level, it is that they have chosen not to continue once they get to a certain point and then decide to raise their family. Understandable. I just don’t like some thinking they aren’t given chances. They are given more chances now then men…..especially getting into college ranks

And male coaches don’t want to spend time with their children? It’s all about having a supportive spouse whether you are male or female. This opinion is a bit antiquated.

Thanks for reply. I am VERY curious who down voted the importance of this issue. The only answer I can come up with is “Male coaches that wants to protect what is currently theirs”

Many of these coaches represent the same swimmer(s) at the same University. Im more curious as to which coach actually coaches each individual swimmer.

For example, who does Rick Bishop coach at Mich that Mike Bottom dosent?

Nc state has 3 coaches on this list as well…

I think because Holloway is the NC State head coach, DeSorbo is the sprint coach for Ryan Held and Taylor is the distance coach for Hannah Moore. That would be my guess anyway after looking at the criteria used for selection.

Go to the link above and read the criteria. I believe it says up to 4 people can get credit for one swimmer. I would assume the number for a swimmer depends on the head coach submitting the names of the assistants.

I believe it is meant that it includes club coach and after college coach. Shouldn’t be more than one in same program on a swimmer. It is an advantage to college programs as everything is going to the “College Club” programs and clubs because of the age of top swimmers today are being left behind. USSwimming should be concerned on down the road.

Why not Jarod Schroeder

Probably because sat out this whole year and trained at home with his club team.