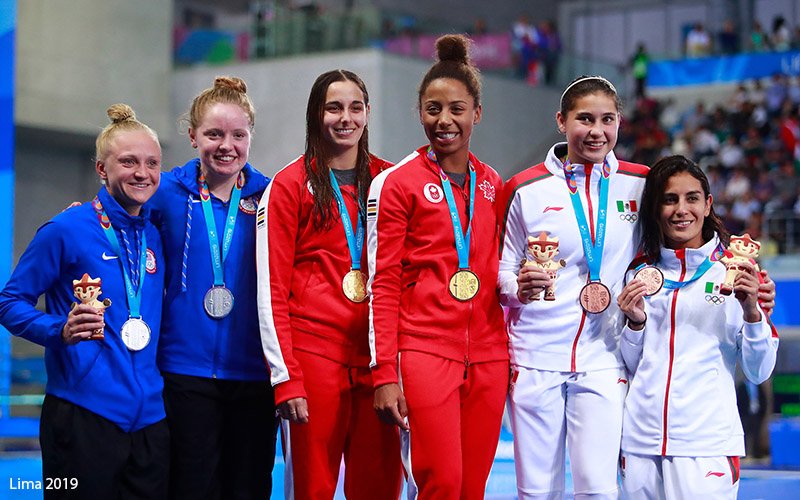 Bacon and Schultz scored 290.10 points to finish second behind Canadians Jennifer Abel and Pamela Ware, who won gold with 309.60 points. The Mexican pair of Paola Espinosa and Dolores Hernandez were third at 285.00.

The Canadians led the entire contest. The U.S. pair was in third, just 0.30 behind the Mexicans, after round three. Bacon and Schultz moved into second with 67.50 points on a back 2 ½ pike in round four and held on to the silver spot with 63 points on an inward 2 ½ pike in the final round.

Bacon and Schultz had not competed synchro together in four years. Because the Pan American Games are an Olympic qualifying opportunity in individual events, USA Diving focused on sending its top individual divers and then would enter those divers together in the synchro events. Bacon and Schultz won bronze together at the 2014 national championships but hadn’t competed together since 2015 before pairing up in Lima.

“It’s definitely really cool to be able to go home with a medal, especially in our first event of three,” Schultz said. “It’s been four years since we’ve done any type of synchro together, so we had a little bit of background, but we’ve changed a lot as divers in the last four years so it was really exciting to get back together.”

Bacon and Schultz will dive individually on 1-meter on Friday and on 3-meter on Sunday.

“I think both of our strategies were to have an event to get going before starting the individual events, and have fun while doing it. Synchro was a good way to do that, and walking away with a medal as well is really exciting,” Bacon said.

“This is my first career international individual medal so that’s really important to me. It gives me a lot of confidence,” Capobianco said.

Capobianco was fourth with two rounds to go but jumped into third after scoring 79.95 points on an inward 2 ½ tuck in the fifth round. He finished out his list with 72 points on a front 3 ½ tuck.

“It’s definitely a lot of pressure. I did put those dives last, the inward and then the front. Those are my two best dives so I know that I can hit them when it counts,” Capobianco said.