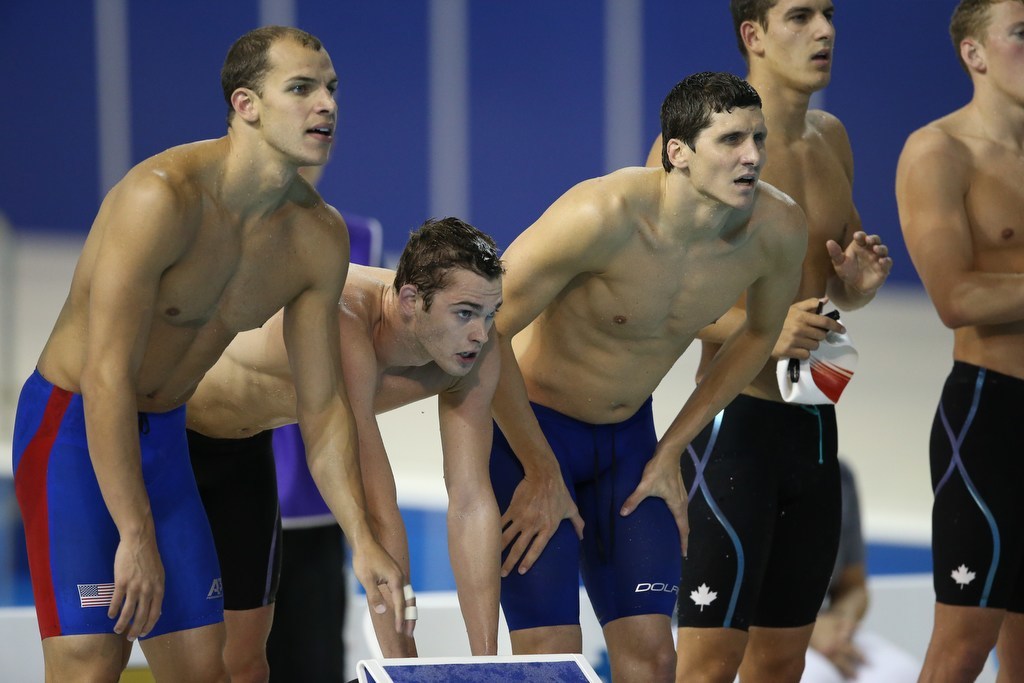 Team USA had their appeal overturned, though no comment has been given on what the grounds for the appeal were. Current photo via Chris Tanouye/www.ChrisTanouye.com

The United States’ disqualification in the 800 meter free relay from Wednesday evening’s session at the 2015 Pan American Games in Toronto, Canada has been overturned.

USA Swimming did not immediately respond for an explanation on what ground the appeal was made, but the result is a restored silver medal for the Americans – saving them from a first-ever no-podium in the event in Pan Ams history.

The team was originally disqualified from the event because swimmer Michael Weiss taped the left middle and ring fingers together, which is a violation of FINA rule 10.8 if not approved by the FINA Medical Committee.

The appeal will bump the Canadians down to a bronze medal and takes Venezuela off of the podium after what appeared to be a second-straight bronze medal in the event on Wednesday evening.

The Americans wound up placing 2nd behind Brazil, who broke the Pan American Games Record with a 7:11.15.

I’m guessing there’s a procedure for that and if they got approval the officials would have been notified.

Very interested to hear what they come up with. Shady.

What was the criteria for getting into this meet? Even with the top swimmers going to Worlds, it appears the USA could have still fielded a much stronger men’s team.

To be fair there may have been some folks who turned down the chance… we have some folks here who finished in the high teens at Nats.

I just don’t like the idea of selecting the team a year out. We have some folks who are clear top 3 types looking ahead to OT16 at this meet (Schmitt, Worrell) instead of getting some reps at Worlds.

If US nationals from last summer was the selection meet, then can someone explain to me how Meghan Small, who finished 3rd of the 200 breast C-Final there, has swum that event yesterday at Pan Ams. 8 swimmers per final. If I count well, she finished 19th at nationals. And she’s selected to swim that race with her best event, the 200 IM.
If you think that 2 girls are sent to worlds, 2 others were sent to WUGs, it means that 14 girls who finished ahead of her have refused the selection?

I am pretty sure Meghan Small was selected based on her 200 IM finish at nationals (4th) place. Her second event was added because of selection rule 1.3.6 which is explained on the USA Swimming website.

Bobo,
Meghan Small finished 19th in finals but that’s even a bit misleading because the C final was limited to 18&Under swimmers. She was only 38th after prelims but got bumped into the C final due to her 18&Under status. No idea why Annie Zhu, Andrea Kropp, Haley Spencer, etc. weren’t put on the roster as a second 200 breaststroker. Maybe roster size limit?

You’re right. 38th after prelims. I had forgotten the C-Finals were limited to 18 and under swimmers.
.

Through the years USA Swimming has ‘played around’ with the selection process and timing of selection. Even with the Olympic Trials. I’m guessing they are looking for the best practice model. But they always seem to get it right when it comes to the Olympics and usually the World Championships. I also know that this kind of international exposure is invaluable for young swimmers and this is a way to expand that given they also had the University games.

Will be very interested to hear the explanation for over turning the DQ. Hopefully the commentators this morning will address it.

I agree that the first part of the rule (“any kind of tape on the body is not permitted”) is clear. It’s the second part (“unless approved by FINA Sport Medicine Committee”) which invites more questions. The FINA swim rules never again refer to this specific committee so it’s not clear who comprises it, who convenes it, when it convenes, etc. I’d guess there might be precedence, typical procedures, or instructions provided by the meet referee at the meet, but I don’t know what those are. Would be curious to hear from the more informed about how this has been implemented in practice.

Doing a little more research, and it seems like the intent of rule 10.8 is about approved equipment (swim suits, paddles, compression gear, etc) The Sport Medicine Committee is a standing group that convenes outside of competition – so specific case approval at this meet would not apply.

So it appears that the question might be whether tape applied to address an injury (for example: band-aids, kinesiology tape, etc) has previously had some sort of blanket allowance when this rule has been applied.

Steve Armitage (CBC) explained the overturn very well – the USA was not trying to hide anything and there were a lot of witnesses (Weiss hurt hand and it was in an ice bucket in the medical room) and they also informed the proper people…guess it didnt get communicated to through the proper channels.

Possibly, assuming the DQ came after the swimmer left the blocks, then no DQ….just like backstroke start – if toes over the gutter before the start but the race is permitted to proceed, then no DQ. Before the race however, if tape is observed, it should be resolved before the race.

That’s an interesting angle. I am told that athletes are inspected when they enter the ready room and before they are seated for conforming equipment (ie, FINA approved suits, etc) Perhaps that is when this should have been identified as a potential non-conformance.

Amazing race great job everyone, so cool to watch.