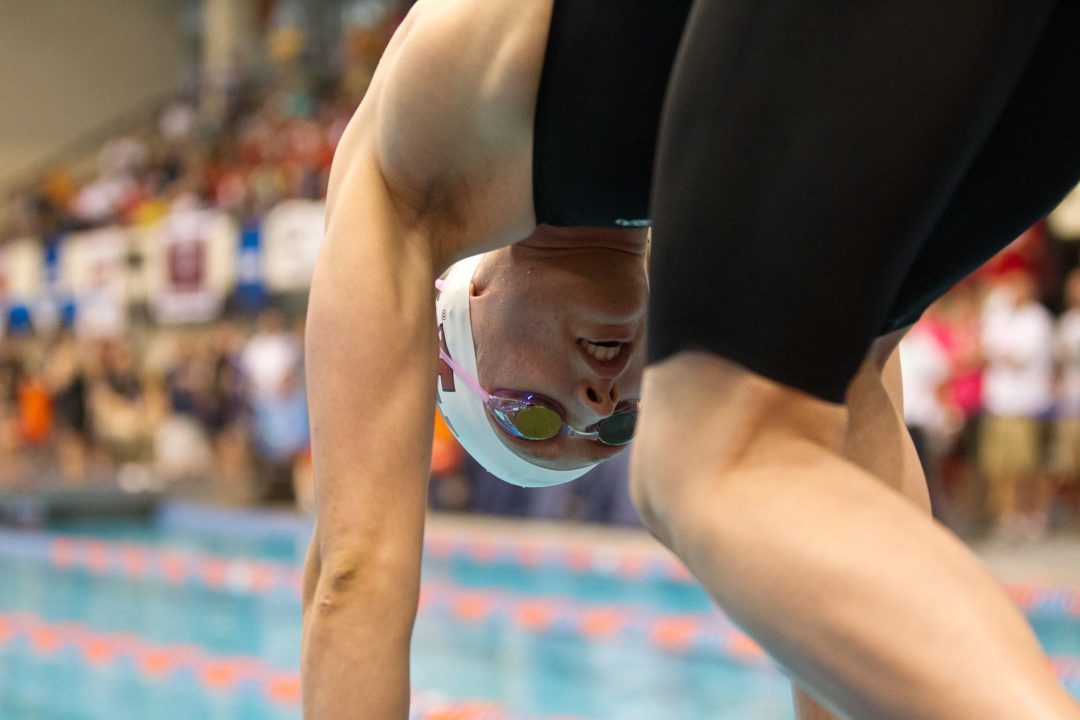 Be sure to Check out our Olympic Trials Page for full coverage. Day 2 prelims are underway from the CenturyLink...

Be sure to Check out our Olympic Trials Page for full coverage.

Day 2 prelims are underway from the CenturyLink Center in Omaha at the 2012 US Olympic Swimming Trials, and we’ll be here bringing you live updates, reactions, and recaps of the events as they happen. Today’s prelims are expected to run much quicker than Monday’s did, which should make for a brisk and lively session.

10:13 AM – the first 5 heats of the women’s 100 backstroke have been a bit off-pace. Heat 5 times, for example, were across-the-board slower than seed times.

This women’s 100 backstroke was a tale of two events. Generally speaking, there was not much excitement coming out of the early heats; really all of the heats up until the three-fastest circle-seeded heats.

But then USA Swimming’s two young-guns Rachel Bootsma and Missy Franklin hit the water in back-to-back heats and lit up the crowd. First came Rachel Bootsma in a 59.69, which is the second-best time of her career (and just a few hundredths away from her personal top mark). Missy then followed that up with an even-faster 59.54. Though not a true comparison as they weren’t head-to-head, the two had very comparable races, with Franklin (not surprisingly) a hair better on the back-half of the race. Those times rank them 5th (Franklin) and tied-for-6th (Bootsma) in the world this year.

But then, in the 17th and final heat, Natalie Coughlin (the other purported contender of the big three) couldn’t match their speed, and was a 1:00.71 to place third in her race, and only 5th overall. That will put her next to Franklin, and will give us the best representation of how far Franklin has come in her underwaters. Unless Coughlin is just being the veteran that she is (and we won’t have a good idea about that until the 100 fly final tonight), she is in serious trouble at this meet.

This was our first answer on Missy and how she would handle the pressure. Not only did she step-up and have a great swim, but she had an almost Lochte-esque, “it’s no big deal it’s just swimming, it’s what I do” demeanor after the race. That’s the sort of attitude that champions come from.

There were a lot of swimmers who got into this semi-final with surprisingly slow times, for all of the USA’s purported depth in the race. Cindy Tran didn’t look as good as she did in the 100 fly with a 1:01.46 for the 10th seed, for example. There were also a couple of 14-year olds making this final in Kathleen Baker (1:01.82) and Kaitlin Harty from the Greenwood Memorial Swim Club.

Harty was the lone swimmer from the first fourteen, non-circle seeded heats to make it into the semi’s with a 1:02.22. She’s a great story – she only made her Olympic Trials cut in this race 11 days before the meet started, and now she’s dropped another second to make the semi-finals. That’s outstanding work from her and her coaches.

Overall, we’ll be expecting much faster from the top 16 in the afternoon.

Ryan Lochte and Michael Phelps swam basically the same race in this men’s 200 free. They toyed with their opponents, let them hang-in for the first 150 meters, and then rocketed off of the final wall to crush everyone else in their heats. Both also shut their swims way down coming into the wall, about the last 8 or 9 meters, so the fact that they split 26.95 and 27.31, respectively, will leave them both thrilled with their potential for the later rounds.

In between them, as the second seed, is Charlie Houchin from IX3. After a great opening 200 meters to his 400 free on Monday, he faded in that race, but he showed that he had some good speed in his tank and that’s what came out here. His swim seemed more labored than those above, but not by much.

Another guy who it’s great to see make it back into the final is Fullerton’s Matt McLean, the 4th seed in 1:48.34. After missing the final in the 400 free, where he was the defending National Champion, this is a nice recovery.

Clay Youngquist actually held the lead in the Phelps-Berens heat through 150 meters, before they hit him in the mouth coming off of the last wall. He held on for 13th overall in the morning in 1:49.55. Adam Ritter also continued to have an impressive heat and sits as the 12th seed in 1:49.39.

There were some surprising names that missed this final, including David Nolan (18th – 1:49.95); and Texas’ Dax Hill, who many were picking to be on this 800 free relay. He was 19th in a 1:50.03. That’s almost two seconds slower than he was at last summer’s National Championship meet.

11:41 AM – Emma Reaney still holding strong as the only sub 1:10 through 10 heats. Some good swimmers coming up though, like Emily Cameron and Abby Duncan; Kukors in two heats.

Fortune favors the bold in the 100 breaststroke, and the hard-starters took three out of the top four spots. First, Breeja Larson hit the swim we’ve all been waiting for from the American Record holder in yards with a 1:06.52. That broke the Olympic Trials Record held by Rebecca Soni at 1:06.87 from 2008. But the record didn’t stand for long – two heats later, Soni dove in and put up a 1:06.33 to take the record right back.

But with Larson being that fast in this round, it puts some big pressure on Jessica Hardy, one of only about 4 swimmers who can get down that low, and who was the favorite for 2nd coming in. Hardy cruised through to win her heat in 1:07.25 for the 3rd overall heat, but if she wants to knock-off Breeja, she’s going to have to be under a 31 going out in finals (she was a 31.33 here).

These top three should all safely navigate the semi’s as well, but the trick for Larson is holding it together for the big rounds. We’ve seen it earlier in this meet already with swimmers like Dax Hill, who are really green to elite levels of swimming, and the challenges they bring. She did, at least in this 100, perform well in finals at NCAA’s. This swim for her ranks 3rd in the world this year – behind only Hardy and Soni.

Also of note, Annie Zhu, now training with North Baltimore, had a great swim of 1:09.07 for the 11th seed. That’s her best time as she was finally able to get back under her best Junior Nationals Time.

There were a few legendary American swimmers who missed this final in what was probably their last chance; that includes Keri Hehn in 1:09.49 for 18th and Megan Jendrick in 1:09.81 for 22nd. Of course, given where they’re at in their careers, that’s not a bad time for either of them. Caitlin Leverenz (1:09.84) and yards star Ashley Danner (1:10.08) also missed the final.

There were a pair of fantastic swims in this men’s 100 backstroke, and both came out of heat 11, the first of the circle-seeded heats. Winning that heat was Matt Grevers in a monster 52.94. After missing the World Championship team in 2011, he was in a hurry in his first event to go-out early and take this event by its you-know-whats and establish himself as the favorite. That time ranks him 3rd in the world this year. He’s now within two-tenths of a second of the fastest he was while in rubber suits in 2009.

In that same heat, though, finishing 2nd was Bolles’ Ryan Murphy in 54.23 (5th overall). That crushes his own 15-16 National Age Group Record that had stood at 54.96. If he makes it into this final (or better yet – the 200 backstroke final), the buzz around the swimming is going to be his incredible potential, and his huge Lats. They’re gigantic.

As for other big names, Ryan Lochte took the 2nd seed in 53.92, but is considering a scratch in the finals (which would mean a Nick Brunelli-Jacob Pebley swim-off for the last spot in the semi’s). Nick Thoman had a casual-looking 53.96 for the 3rd seed, while another one of the favorites David Plummer was 8th in 54.38.

The biggest miss was probably Stanford’s backstroker extraordinaire David Nolan, who was 19th in 55.58 – about four-tenths off of his best time.

1:09 AM – Ashley Twichell’s huge improvement at Mission Viejo is not limited to open water. She just tore through her 400 – it looked like a sprint for her with a 4:12.69. That’s her best time by three seconds.

The young, future superstar Katie Ledecky showed no fear attacking the heats of this women’s 400 free. She swam next to Allison Schmitt and Elizabeth Beisel and didn’t back down one bit. She pushed Schmitt stroke-for-stroke. The difference was in the final 50 meters, where the veteran Schmitt was just that-much better and took the top seed in 4:05.60; but it was the 15-year old Ledecky who will be in lane 5 in the final as the #2 seed in 4:05.78.

Chloe Sutton had a good swim in 4:07.91 for the 3rd seed, and Elizabeth Beisel had another easy swim for the 4th seed in 4:08.37. She looked exhausted as compared to how she came out of the pool in the 400 IM on Monday.

Becca Mann will be in another 400 free in 4:10.38 for the 8th seed. Coming into the meet, she was better known for her distance freestylers, but she may be developing best as an IM as well.

The defending National Champion Ashley Steenvoorden missed the final in 4:10.96, and Haley Anderson was 11th in 4:11.00.

Katie Hoff, after scratching the 400 IM on Monday, was only 20th in 4:13.08, meaning no final for her in what might have been her best event individually. She’ll now have to count on a 200 free relay spot as her best chance in London.

I know its only prelims but I am a bit worried about Natalie making the team. Bootsma and Franklin are looking real good.

I’m worried too. I’m hoping she is just being very smart and conservative (which is known to be).

which she* is known to be

Personally excited about Coughlin not making the team. We have enough egomaniacs in the sport… certainly don’t need the worst of them all.

Im curious… what makes her an egomaniac??

Troll harder, breh. I’ve met Natalie, and she is one of the nicest people I’ve had the fortune to be acquainted with.

She reject you or something?

I think she definitely is, just by looking at her splits, seemed like she shut it down the 2nd 50. She’s been around long enough to know when and what it takes….