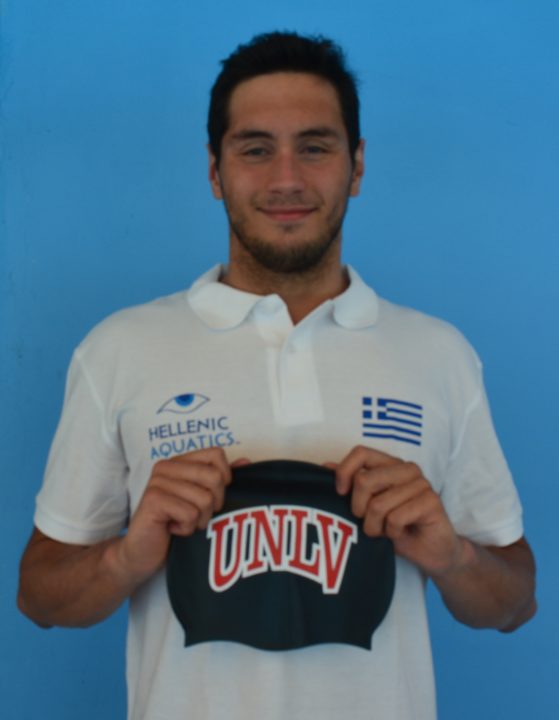 UNLV junior Panos Bolanos (above) won three individual events as the Rebels topped Utah for the first time in over 20 years. Current photo via Panos Bolanos

The UNLV men topped the University of Utah for the first time since 2012 at home on Saturday. The two programs are old conference rivals, having swum an annual dual meet dating back to time Utah’s time in the Mountain West and they have continued the tradition since Utah left for the PAC 12 for the 2011-12 season.

Leading the way for the Rebels was junior Panos Bolanos, who won all three of his individual events on the day. The All-American from Athens, Greece started off his day by winning the 100 back in 48.85 to take the win over Utah’s Parker McOmber. Bolanos later returned to complete the backstroke sweep with a 1:46.35 in the 200. In his third and final individual event of the day, the 200 IM, Bolanos opened up a massive 3-second lead at the 100 and never looked back, taking the win in a season best of 1:50.13. Bolanos’ season bests in the backstrokes stand at 47.48 in the 100 and 1:44.01 in the 200 from the USC Invite in October.

Utah was led by sophomore Marko Kovacic, and senior Ben Waterman, who each won an individual event for the Utes. Kovavic, a native of Bosnia and Herzegovina, won the 200 free in 1:39.01, which is just off of his season best of 1:38.73 from two weeks ago during Utah’s dual with Cal in Salt Lake City. Waterman, a senior from Albuquerque, New Mexico, won the 100 fly in 48.33, a season best by nearly 8 tenths.

Utah was also strong on the boards, with senior Tony Chen sweeping both the 1- and 3-meter diving events.The All-American from Cypress, California won the 1-meter in dominant fashion with a score of 401.15 and then later returned to win the 3-meter with a score of 331.50.

UNLV will return to action Nov. 18-20 when they travel east to take part in the Tennessee Invitational in Knoxville, while Utah will take several weeks off of competition before heading to Princeton for the Princeton Invitation December 3rd-5th.