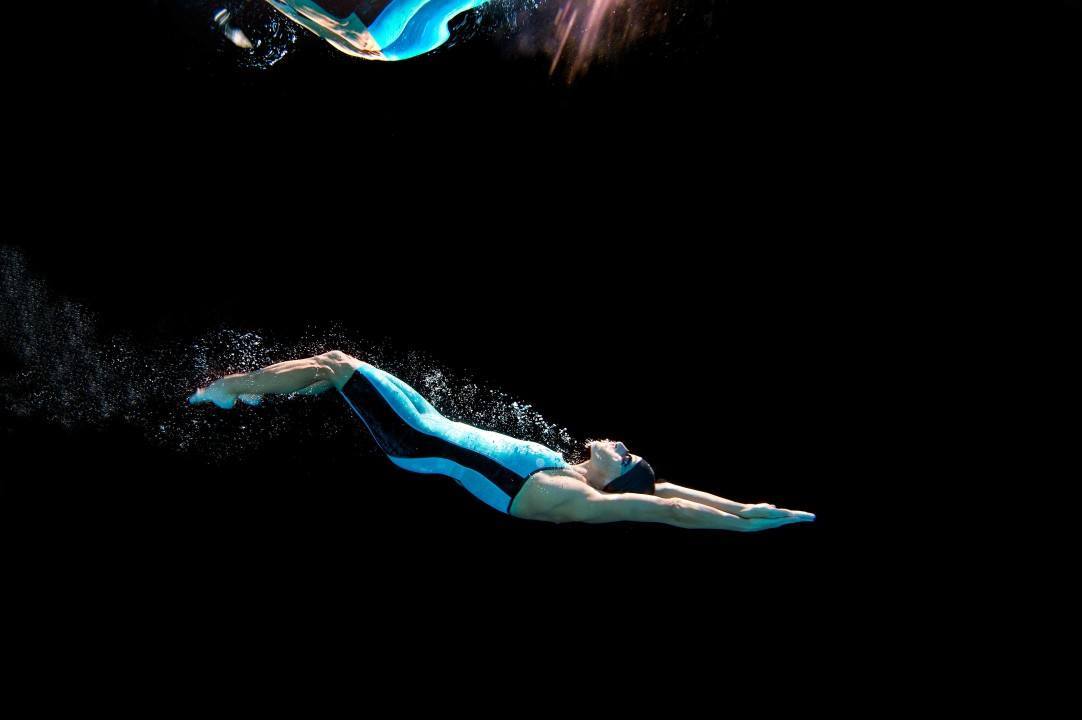 The best swimmers in the world know the fifth stroke: the underwater dolphin kick. If you aren’t using it, then you aren’t taking advantage of the most explosive moments of your swims. Current photo via Mike Lewis/Ola Vista Photography

Courtesy of Fitter and Faster, a SwimSwam partner.

Ask swimmers what their fastest stroke is, and they have the standard four to choose from: fly, back, breast and free. The fastest moving stroke in the world, however, isn’t really a stroke at all. It’s more of a secret weapon. The best swimmers in the world know the fifth stroke: the underwater dolphin kick. If you aren’t using it, then you aren’t taking advantage of the most explosive moments of your swims.

Underwater dolphin kicking has completely transformed the sport. Swimmers are moving at the highest velocity at the starts and turns of their races. The force from jumping off the blocks and pushing off the wall provides momentum into the streamline and breakout. The fastest swimmers accelerate off the walls into a tight streamline and push their underwater dolphin kicks to the full fifteen meters allotted. Three-time Olympian Kara Lynn Joyce explained that serious swimmers must learn to develop their underwater dolphin kicking: “It’s an essential part of training. It’s been integrated into all four strokes now. It’s a skill that I didn’t learn until later in my career, but kids are learning it a much younger age now. It’s making them faster than ever.”

Underwater dolphin kicking is responsible for an evolution in the sport of swimming. Olympic Champion Mark Gangloff said that “It’s fun to see this young generation that has embraced it at an early age because they’re even better at it than people of my generation…Now, the club coaches have invested in doing these amazing things underwater.” This has caused the times to get faster and faster.

The best swimmers consistently take full advantage of their walls, but underwater dolphin kicking isn’t a skill that develops overnight. Like everything else in this grueling sport, it takes thoughtfulness and practice.

Here are some tips to master your underwater dolphins:

Practice a Tight Streamline – Hold a tight streamline off of every single wall. Squeeze your ears tightly and keep your head down. Try kicking a few 25s of just streamline every day to make it a habit. If you have solid streamlines in practice, it will happen for you in a meet.

Initiate Kick From Hip – Your kick should start with a small movement in your hip. Do not bend your knees. A good drill to try is head-lead drill. Kick dolphin kick with your arms at your sides and lead with your head.

Maintain tight and frequent kicks – Remember this is the fastest part of your swim. Short and fast kicks will be the most efficient. Try doing several sets of vertical kicking. This will force your dolphins to be short and fast.

Control your breath – Try to maximize the fifteen meters underwater that you’re allowed for fly, back and free. Add 25s underwater to every practice and push past the flags on every set.

FIND AN UNDERWATER DOLPHIN KICKING CLINIC NEAR YOU:

The Fitter and Faster Swim Tour has designed a specific curriculum for underwater dolphin kicking. At these clinics, elite clinicians like Olympic Gold Medalist Tyler McGill and National Team Member Laura Sogar demonstrate the specific techniques and drills that they use in their training.

Fast Underwater Dolphin Kicking for 12 & Over – Fishers, IN

Underwater Dolphin Kicking Skills for 11 & Under – Fishers, IN

About the Fitter and Faster Swim Tour Presented by Swimoutlet.com

The Fitter & Faster Swim Tour Presented by SwimOutlet.com produces swim clinics featuring elite stars of the sport and the most innovative teaching platforms. FFT Swim Clinics can be customized to meet age and skill level of every team and community. Call 786-837-6881 or visit http://www.fitterandfaster.com/ to learn more.

Swimming News courtesy of Fitter and Faster, a SwimSwam Partner.

I believe I remember hearing Austin Staab say in an interview that doing lots of back extensions were a key to developing his UW kick. Anyone else see that?

Rule should be made fluttter only on free and back as group and Breast have specific kicks. A fifty stroke is not needed mastered by some and we don’t need under water swim on 60+% of short course swimming. Let’s get back to real swimming and the fifth stroke favors certain body types. It wil dominate three of four strokes which is not real swimming.

I’ve posted exactly that a few times on SS. It only makes sense. My siblings haven’t competed in swimming since ~2000. They both don’t like watching yards swimming bc it is all UW nowadays. I coach UW work incessantly, but I think it’d be better for the sport if we made UW maybe 10m max, and stroke specific.

I disagree, if anything it has made it more exciting to watch, and it’s great watching the best utilize it…Lochte, Coughlin, Phelps, Shields, etc…

In my opinion, Lochte is the most effective with this technique (and the most entertaining). Particularly his 200 free races, short and long course. At his peak, he would almost toy with the competition…he would hold pace with the leading swimmers in the race and just destroy of his final wall! Awesome!

I don’t see the justification for removing dolphin kicks from free or back. Free and back allow any kind of kick, not just flutter, and I think that freedom should apply to underwaters as well. If the flutter kick was required when swimming either of those strokes, then I could understand the logic of requiring a flutter kick.

However, as someone who was never a great swimmer but was able to compete at a decently high level due to solid underwaters, I agree wholeheartedly about changing the limit to 10m. I sure as hell took advantage of the 15m rule, but it never made sense to me that over half the race could be spent NOT swimming.

Sorry, for clarity’s sake, “If the flutter kick was required when swimming either of those strokes, then I could understand the logic of requiring a flutter kick” should probably have “on the underwaters” at the end.

You think the dolphin kick favors certain body types and that is why it shouldn’t be allowed?
Ban breaststrokers with flexible knees, and butterfliers with “too much muscle.”

I’m 5’9 and dolphin kick is the only thing that lets me keep pace with my 6’+ competitors.

• While I believe that hip movement is important, the propulsion is definitely coming from the extension of the legs.

• The knees must bend and drive forward in order to set up the kick. From that, the legs then whip forward to a complete extension. This movement is powered by the quadriceps. Just like kicking a soccer ball or football.

• It should be a forward kick, meaning that the toes should be in front of the body at the finish of the kick. See images below.

• For the duration of the leg whip, the core should be tense and locked in. With this core tension, the hips move backwards… Read more »

This article mentions dolphin kicking but clearly has a picture of a great looking backstroke.

The mistake I make is watching pros, getting a good idea of what to do, but think it is an effortless movement and go nowhere becuase I’m not putting effort into my kick.

Hopefully Missy will attend one of those clinics.

I’m not sure I agree with the second piece of advice, unless I’m interpreting it wrong, in which case feel free to correct me. I’m seeing “initiate from the hip” and “don’t bend your knees” in conjunction, which doesn’t make sense to me.

If the hips are really initiating the kick, then the hip joint is flexing, causing the knees to drive forward. What we see from slow-mo footage of the best underwater swimmers is that they are driving the knees forward in this manner, establishing a knee bend, and then following through explosively with the feet using (predominately) the quad muscles to extend the knees. If the knees didn’t bend, the abs and hip flexors would have to move… Read more »

I agree with you 100%. I think the article was trying to say that, for that short instant at the beginning of the kick, initiate at the hips (actually upper abs) and let the motion then progress to the rest of the leg. The analysis of Natalie Coughlin and other Olympians and computer simulations show that 90% of the propulsion in the kick comes from the feet, and that requires the knee bend. http://www.tecplot.com/blog/2011/10/01/analyzing-the-dolphin-kick-of-top-olympic-competitors/

Sven and SwimDoc, you guys are both on the money. SwimDoc, I have never seen the article at that link…what an awesome look. I would love to see the actual study results and some more images of that technology. The high pressure zones look like (in the few images shown at the link) they occur where there is the most frontal drag…except for a small high pressure zone where propulsion is initiated on the upkick (swimmer on back) near the feet and ankle. Also notice the alternating low pressure/high pressure vortices. That is the whole key to dophin kick…generating rhythmic vortices which actually allow the swimmer to utilize the kinetic energy from the currents to augment the drag propulsion they… Read more »

You are both right and wrong. I don’t think there are any coaches who really believe there should be knee bend even though they often tell swimmers not to bend their knees. It comes down to passive and active knee bend. A swimmer should not try to bend their knees through the motion it should occur passively. As far as musculature the kick initiates from the hips. The quads and hamstrings do most of the work, but as their origins are the anterior and posterior iliac spines they are also hip flexors and extensors. The gastroc only really aids in plantar flexion to keep the feet pointed. Abdominal muscles are also key. It all really comes down to having a… Read more »

Coming from somebody who knew nothing but how to dolphin kick I loved this article.