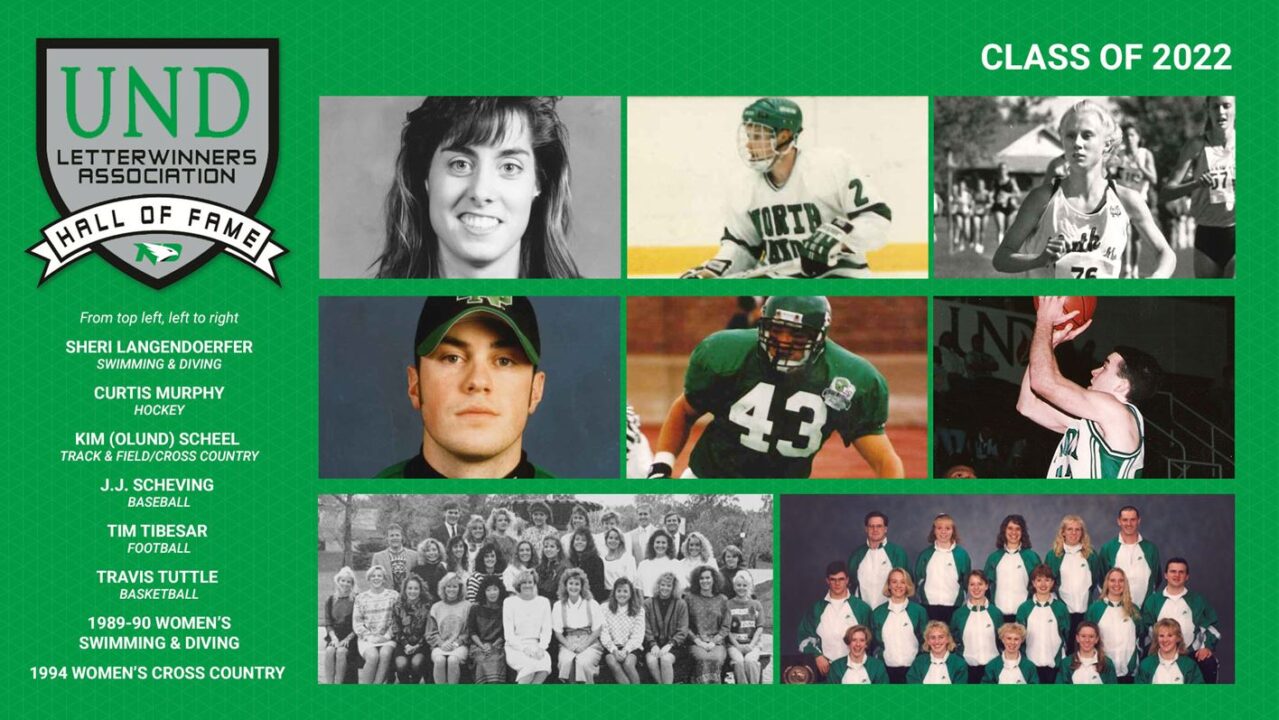 The 47th annual Athletics Hall of Fame event will take place with a dinner and induction ceremony on Friday, Sept. 30. The Class of 2022 will also be recognized the following day during UND’s football contest against Missouri State at the Alerus Center.

“It is an honor to serve as the UND Letterwinners Association President and being part of this special process for so many worthy individuals and teams,” said Martinson. “We are looking forward to welcoming the Class of 2022 and celebrating their many accomplishments at UND.”

This year’s six inductees bring the total number of individuals in UND’s Letterwinners Athletics Hall of Fame to 272, with a team total at 45.

“We look forward to celebrating this deserving class of soon to be UND Hall of Famers,” said Chaves. “Whenever we are able to celebrate a new class, we do so knowing that it is because of amazing individuals and teams like this class that today’s student-athletes and coaches are afforded the opportunity to represent UND and the State of North Dakota.”

Bottelberghe sits atop many records in North Dakota’s illustrious history in the sport, earning both individual and team championships. She holds multiple conference records in three events, including a three-time record holder in the 800-meter freestyle relay.

She won back-to-back North Central Conference (NCC) crowns in the 200-meter breaststroke in 1988 and 1989, setting conference records in both meets. Bottelberghe shattered the league mark in the 400-meter IM at the conference championships in 1989 to claim another crown before capturing her fourth individual title in the 500-meter freestyle.

Bottelberghe was part of one of the more dominant NCC relay teams in that era, rolling to four straight conference titles and setting three records in the 800-meter freestyle relay.

She was also part of the honored 1989-90 team, is a four-time All-America selection and won four team NCC crowns.

Murphy was a two-time All-America selection that anchored a blue line at North Dakota from 1994-98, helping usher in a new era of winning for the hockey program. He helped the Fighting Sioux win their first NCAA championship in over a decade in 1997, earning NCAA All-Tournament Team honors in the process.

After capturing the national title, he was named a Hobey Baker Finalist and the Western Collegiate Hockey Association’s (WCHA) Player of the Year in 1998, with the latter being the first for the program since 1987. He ranks second all-time at UND in goals by a defenseman with 32, seventh for points by a defenseman with 118 and his 86 assists are ninth at UND among blue liners.

As a team, Murphy helped the Sioux snap a seven-year postseason drought in 1997, culminating in the program’s sixth national title. The team went on to reach the NCAA Tournament again in 1998 as a senior and has since missed the postseason only three times. He won two of what-proved-to-be three straight McNaughton Cups in his final two seasons, with those teams joining the 2020-2022 squads as the only to win three consecutive conference crowns.

Following his collegiate playing days, Murphy went on to enjoy a 17-year professional career where he won two Calder Cups, a Spengler Cup with Team Canada and an EBEL title in Austria.

Scheel earned six All-America honors during her four-year career at North Dakota, earning honors in both track and cross country.

She was a three-time All-NCC selection for cross country, capturing the only NCC titles in program history in 1994 and 1995. Scheel represented UND three times at the NCAA Cross Country Championships, finishing 10th as a junior and senior.

During the track season, Scheel continued her dominance in distance events, winning the 1996 NCC title in the 5000-meter run during the indoor season, a time that still sits second at North Dakota, and following it with the conference record and title in the 10000-meter run in the outdoor season. She placed fifth at the NCAA Championships in both events.

In the classroom, Scheel earned five-different All-Academic Team selections from national publications and won UND’s Scholar-Athlete of the Year in 1997.

Scheving is one of the most dominant pitchers to ever put on a baseball uniform at North Dakota. The Crookston, Minn., native spent five seasons on the mound for the Fighting Sioux, etching his name in the record books.

He is the program’s single-season record holder for wins, complete games, shutouts, strikeouts and saves while also sitting atop the record book for career wins and strikeouts.

Scheving was a two-time All-NCC selection in 2000 and 2004, with the latter going down as one of the best seasons by a pitcher in the league’s history.

In 2004, Scheving finished with a school record nine wins, three shutouts, eight complete games, seven saves and 104 strikeouts. The 104 K’s are the second-most in NCC history and earned him the league’s most valuable pitcher award that season. He became the program’s second All-America selection as a senior, earning third-team honors while also becoming only the second player in program history to be named the NCAA DII All-Central Region Pitcher of the Year in 2004.

Tibesar was a two-time captain for the Fighting Sioux in 1995 and 1996, helping the program to three consecutive NCC titles and a trio of NCAA postseason appearances.

A standout linebacker, Tibesar earned All-NCC honors in 1995 and 1996 while also being named the league’s top linebacker as a senior. During that final campaign, he earned four All-America First Team selections for his play on the field and a CoSIDA Academic All-America honor in the classroom.

He ranks second in program history with 428 total tackles over his career and sits on three-different lists for single-season tackles.

Tuttle is one of the most decorated scorers in program history, earning three straight All-NCC honors in 1995, 1996 and 1997.

He ranks fourth in program history with 1,935 points and is the program’s all-time record holder in three pointers with 350. Over his final three seasons, Tuttle averaged over 20 points per game and his 581 points are the most by a sophomore in program history.

Known for scoring in bunches, Tuttle tallied three 40-point games in his career, tied for the most in school history, while also adding 13 games of at least 30 points over his tenure.

Mike Stromberg’s 1989-90 women’s swimming and diving team was the ninth of 20 straight NCC title teams that took to the pool on the women’s side. The Fighting Sioux finished third at the NCAA DII National Championships with 405.0 points, the most-ever scored by the program until 1997 at the event.

Led by the NCC’s Swimmer of the Year Michelle Puetz and Diver of the Year Katie Stephens, the Sioux earned 12 top-eight finishes at the NCAA Championships that year and had five future UND Letterwinners Hall of Fame selections on the roster.

Dick Clay’s 1994 women’s cross country team is one of the most decorated in the program’s history, becoming the first to see an individual win a conference crown.

After claiming the conference title, the Sioux won the team’s first regional crown, still sitting as the only UND team to accomplish the feat. The green and white advanced to the NCAA DII National Championships and placed fourth, tied for the third-best finish in program history.

The Letterwinners Association Honorary Award is given upon official action by the club’s Executive Committee to persons who, in the opinion of the committee, have contributed significantly to the furtherance of UND Athletics.

Berg has been synonymous with football in the Grand Forks community since his arrival in the 1970s. He served as the head coach at Grand Forks Central from 1979-2006, leading his team to three state championship games and the 2005 title, the first for the Knights since 1966. He is a member of the Black Hills State College, North Dakota High School Coaches Association, Grand Forks Central and National High School Coaches Association Hall of Fames. For over a decade, Berg’s voice can be heard providing commentary for UND football games and you can always find him in his usual spot every morning at UND football practice.

Not many people can rival the dedication that Kauk has for UND Athletics over his years, serving as a longtime supporter of all things green and white. Kauk can always be found on the sidelines of the Alerus Center firing up the crowd and the team when a crucial play is needed or at Ralph Engelstad Arena anxiously awaiting the next goal. He is an athlete himself, competing in Special Olympics and helping forge a special relationship between UND and the organization that goes beyond the playing surface.

The Clifford Award, established to honor former UND President Thomas J. Clifford, recognizes the UND alumni who serve as athletics coaches at the high school or collegiate level and have been notably successful in their sport.

Organ is the current head women’s swimming coach at Vanderbilt University, entering his 17th season in 2022-23. In 2006, he directed the first swim team at Vanderbilt since the 1992 season.

Before coming to Vanderbilt, Organ served as the senior assistant coach of the Nashville Aquatic Club, one of swimming’s most competitive club teams. While coaching the NAC, Organ mentored six national championship qualifiers in addition to assisting 20 swimmers earn Division I scholarships.

He earned six All-America honors during his time at North Dakota and was named the 1995 NCC Swimmer of the Year. Organ was UND’s first male swimmer to finish inside the top-8 at the NCAA DII National Championships in the 200-meter IM and earned five top-8 finishes in relay events at the national championships over his career.

The Hall of Fame induction ceremony, proudly sponsored by the UND Letterwinners Association, will be held on Sept. 30 in the Alerus Center ballroom. For ticket information, please contact Val Sussex at 701.777.2611 or at [email protected].

Man I wish UND could bring back swimming and diving. Would also be cool if NDSU formed a team and used that Hulbert pool.