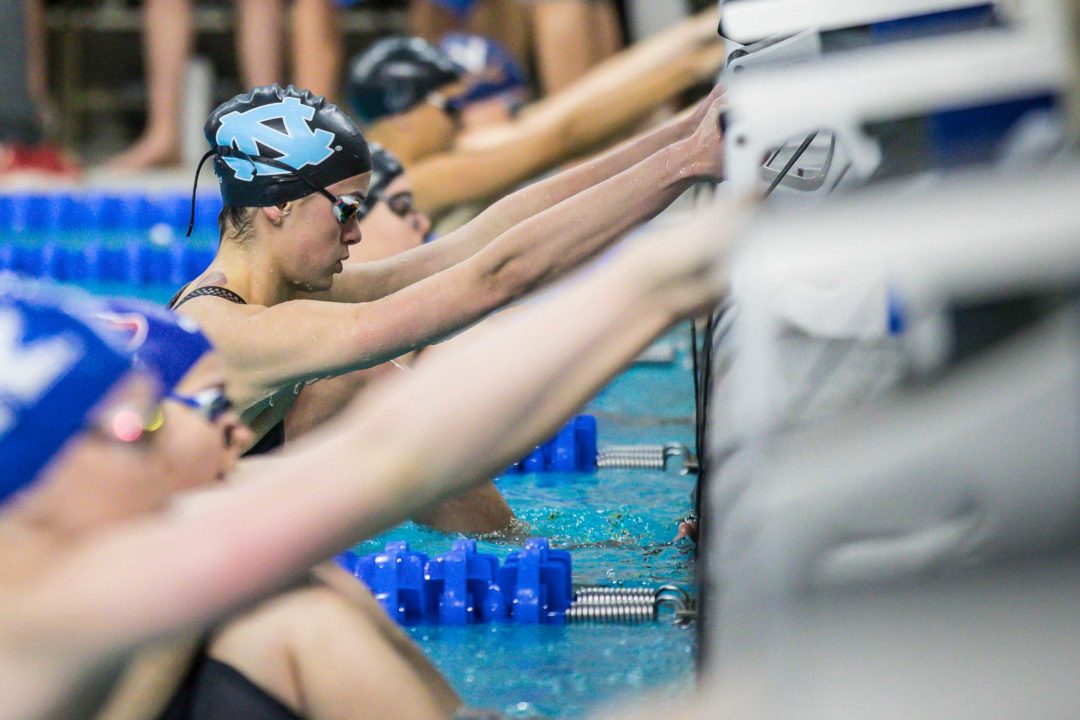 The University of South Carolina traveled up to Chapel Hill to race against North Carolina on Saturday. The UNC men’s and women’s teams came away with their third dual meet win this season, remaining undefeated. The South Carolina women’s record now is 2-3, while the men are 0 5.

Starting on the men’s side, South Carolina had fifth-year Rafael Davila as the team’s sole multi-event winner. Davila comfortably won the 1000 free (9:13.97) but was challenged by UNC freshman Louis Dramm in the 500 free. To take first, Davila went a 4:29.41, and, finishing close behind, Dramm clocked a 4:29.46 with a push on the final 100.

Dramm did get an individual win in the 200 free with a season-best time of 1:37.45, which is also the leading time on the UNC men’s team.

The third UNC swimmer on the men’s team to win multiple individual events was fifth-year Tomas Sungaila. The freestyle sprinter won the 50 free (20.29) and 100 free (44.40) and went season-best times like his teammates.

Up next, sophomore Skyler Smith won the 100 breast (1:01.94) by one and a half seconds in front of South Carolina junior Georgia Johnson (1:03.30). Smith followed up with a win in the 200 breast (2:16.81). The back half of the event turned into a close race when South Carolina junior Laura Goettler began advancing but finished in second with a time of 2:16.97.

Finally, senior Ellie VanNote won by almost a second ahead of South Carolina junior Nicholle Toh (54.76) in the 100 fly, going her season-best time of 53.87. VanNote held her first-place position throughout the 200 fly, but South Carolina junior Melinda Novoszath kept herself at VanNote’s hip. In the end, VanNote claimed victory, swimming a 1:59.15, while Novoszath finished behind in a time of 1:59.71.

South Carolina started the dual meet with a win in the 400 medley relay (junior Tatiana Salcutan, Johnson, Toh, senior Janie Smith), but UNC responded in the 400 free relay. UNC fielded its “A” team with graduate student Sophie Lindner, sophomore Olivia Nel, Countie, and freshman Madeline Smith. Nel (49.58) and Countie (49.69) clocked their splits in under 50 seconds, giving the relay a comfortable lead. South Carolina freshman Dylan Scholes tried to close the gap as the anchor, going the fastest split for women (49.54) but finished second.