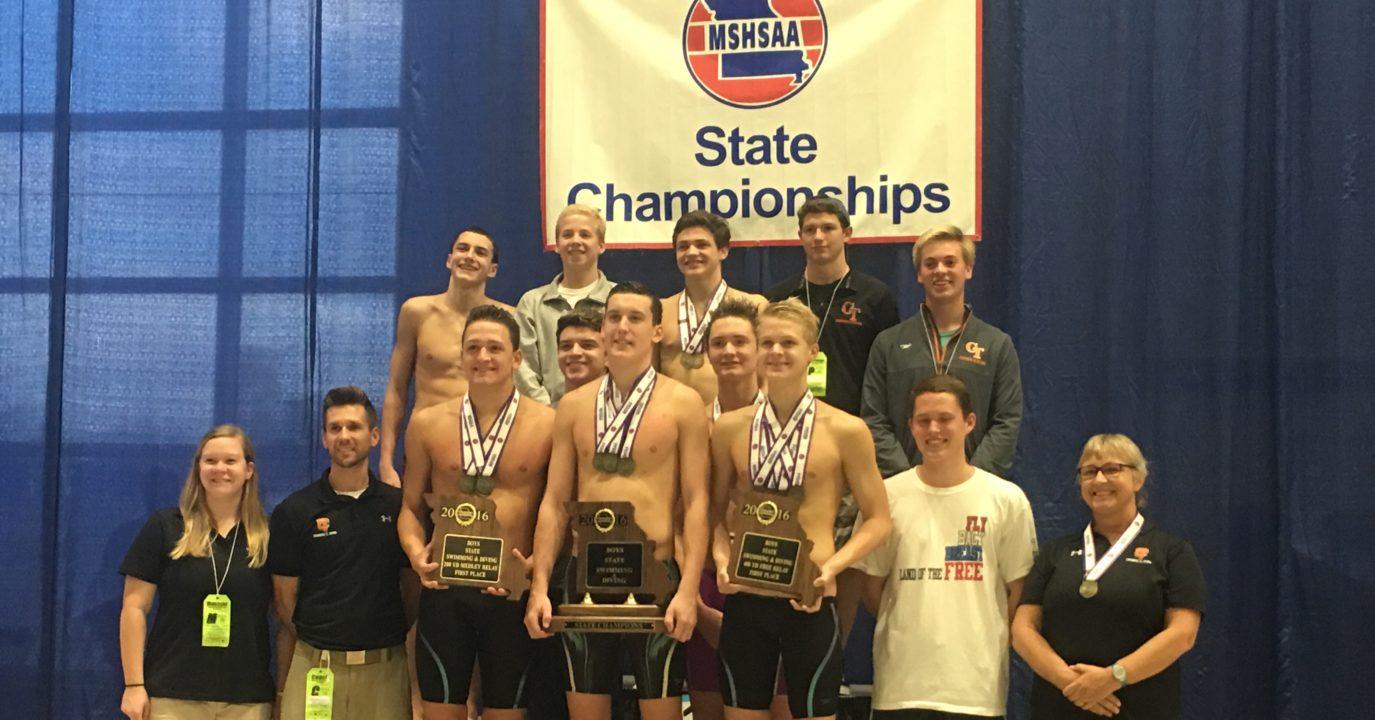 Dayna Powell has been the Head Swimming Coach at Cape Girdardeau Central since the school first sponsored the sport 27 years ago.  In 2015 her team won one event, the 200 medley relay, in State Record time, and took home the third place trophy, their highest team finish in school history.  After the Tigers got that taste of blood, a new kind of hunt began that led to wins in six of the twelve events at the 2016 Missouri High School Championship and the MSHSAA Team Champion trophy coming home with the Tigers for the first time.

When Columbia Rockbridge turned in their 1:35.13 in the 200 medley relay they exactly tied the State Record set last year, but that record had been long since forgotten.  The Cape Central team of Jacob Bening, Sam Hahs, Brogan Davis and Reagan Ragsdale made that one year old record look as though it was from the age of the dinosaurs, setting the mark deeper into uncharted territory in both the prelim and final sessions of the 2016 Championship. Their winning time of 1:32.63 is 2.5 seconds faster than any team in the 80 year history of MSHSAA swimming and sent a clear message to everyone in attendance that they were ready to fight for the team title.

The next event belonged to the Kearney Bulldogs, as a 1-2 finish from Evan Holt (1:39.94) and Austin Wolfe (1:41.69) combined with their third place points from the medley relay to bring them into the lead.  Rockbridge also picked up valuable points with a third place finish from Zach Lorson, who touched in 1:42.80.

The 200 IM contributed to the drama of the team race when a disqualification in the B final against Cape Central’s Sam Hahs took valuable points away from the Tigers, but the Cape Central boys did what good teammates do… rather than allowing that setback derail them, it became a motivator.  In the very next heat Brogan Davis turned in a 1:48.21 to move up from 4th seed, taking the 200 IM championship.  Davis had to hold off hard charging Liam Bresette from Lee’s Summit North who finished at 1:48.88 on an incredible 24.64 final 50 split.  Sam Drew from Lee’s Summit rounded out the top 3 at 1:51.35.

Cape Central’s Reagan Ragsdale was not the top seed in the 50 freestyle, but like Davis he was able to move up when it counted.  Ragsdale dropped .48 from his preliminary time to touch at 20.92, fending off Eureka’s Mason Jung and Kearney’s Grant Sloan who touched at 21.15 and 21.16 respectively.  Ragsdale would also win the 100 freestyle, a full second ahead of any other competitor at 45.83.  He was followed by Kearney’s Austin Wolfe (46.83) and teammate Jacob Bening who helped make it a knock-out event for the Tigers at 46.88.

Francis Howell North’s Peter Lucido won the diving event with 486.00, followed by Hunter Grannum from MICDS (467.65) and Cole Earl from Glendale (459.20.) When the diving points from the morning session were added to the team scores, Blue Springs South got a boost from 6th, 8th and 9th place finishes, which when combined with their depth in earlier events put them into a significant lead.  Even after Ragsdale’s title in the 100 free, and Brogan Davis‘ win for the 100 fly, the Tigers were not able to make up ground.  The meet was still incredibly close between the top four teams at that point. Davis won the fly in an outstanding 48.85, followed by Max Goldenberg from MICDS (49.59) and Liberty’s Noah Witzki (50.61.)

The 500 free was a strong event for Rockbridge with three scoring performances led by runner-up Dane Florea at 4:30.80, while Kearney also benefited from third place points from Evan Holt at 4.35.34. The real story in the 500 freestyle though, was Liam Bresette, who absolutely dominated the field, lowering Matt Beasley‘s MSHSAA Record 4:27.89 from 2002 all the way down to 4:24.68.

The 200 freestyle relay was an incredibly close race until the Blue Springs South team of Nick Keller, Kyle Hepting, Ben Morgan and Jake Workman pulled away on the second half to win in a dominating 1:26.14.  Rockbridge was second place, holding back Christian Brothers 1:27.59 to 1:28.01.  This event saw an incredibly motivated Cape Central team in the B final claw their way up from 13th to 9th place, helping to offset some of the advantage of the top two teams in the battle for the trophy.

The 100 back went to Kirkwood’s Jack Wever with 49.67.  TJ Halliburton from Chaminade gave Wever a challenge by joining him below the 50-second mark at 49.88.  Rockhurst’s Collin Nill rounded out the top three at 50.86.  The 100 breast was a 1-2 finish by Sam Drew and Andy Huffman of Lee’s Summit who finished in 56.03 and 57.12 respectively.  Rockbridge brought themselves back into the team hunt in the breaststroke with third and fourth place finishes from Caleb Rhodenbaugh (57.16) and Zach Lorson (57.28.)  This event also finally brought Cape Central back into the lead on 6th place points from Sam Hahs at 57.71 as Blue Springs South had no finalists in the event.

After the breaststroke the top three teams, Cape Central, Blue Springs South, and Columbia Rockbridge were all within ten points of each other at 187, 182 and 177.5 points respectively.  With all three teams in the A-final with strong squads, this was still anyone’s meet. Cape Central got in the lead on a 46.99 split from Jacob Bening and never looked back, as Truman Vines, Davis and Ragsdale extended their lead to over three seconds, touching at 3:07.28 for the win, sealing the deal on their first ever team title.  Kearney finished second at 3:10.49, followed by Rockbridge at 3:12.00.  Blue Springs South, with their 5th place finish (3:13.57) behind Kirkwood (3:13.02) was good enough to keep them ahead of Rockbridge for second place overall in team score, beating the Bruins by half a point, 210 to 209.5.