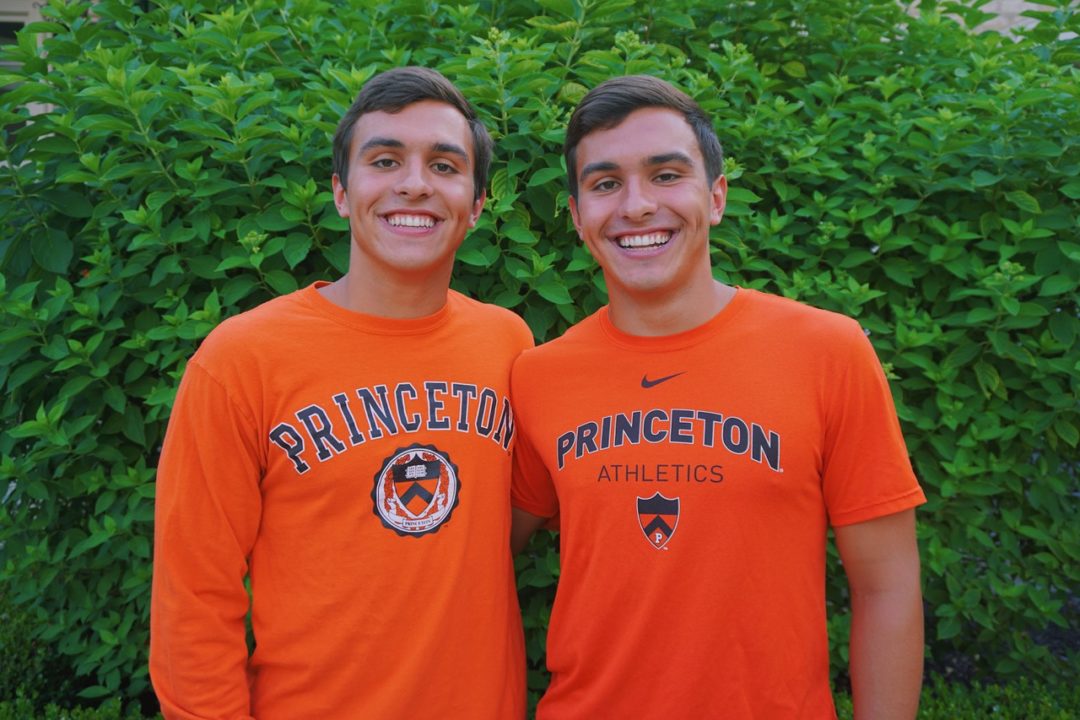 Former level-10 gymnasts, twin brothers George (L) and Taso (R) Callanan have committed to dive at Princeton in the class of 2025. Current photo via Taso Callanan

Twins Taso Callanan and George Callanan, seniors at The Wellington School in Columbus, Ohio have both verbally committed to the application process* at Princeton University and will begin in the fall of 2021. (Author’s note: Princeton is the only member of the Ivy League to have done away with the early admission cycle for the class of 2025.)

“The high achievements of academics and athletics at Princeton are like none other. With Princeton’s unparalleled academics and the previous success of the Swimming and Diving program, we knew Princeton University was the right choice. The fairly new head coaches, Sean Letsinger and Matt Crispino, and the rest of the PUCSDT have a strong vision for what the team can become.”

The twins are relative newcomers to diving. They were both level-10 gymnasts until 2018-19. George won the Junior National title on floor exercise in 2017; Taso won the Junior National titles on floor exercise in 2018 and 2019 and placed 3rd on Vault in 2019. During their freshman year of high school, George underwent extensive knee surgery that necessitated an 18-month recovery. He decided to switch to diving in August of 2018 and progressed quickly. By the end of his first season, he qualified to Junior Nationals on all three boards as a 16-year-old in the 16-18 age group.

Taso told SwimSwam, “After the 2019 Diving Junior National Championships had ended, George came in contact with Princeton’s head diving coach, Sean Letsinger and committed to the application process at Princeton in August of 2019. With more opportunities in collegiate diving and fewer risks of injury, I decided to switch from gymnastics to diving after the summer going into my junior year. After George committed in August of 2019, Coach Letsinger piqued interest in my switch to diving. While George and I had the same background in gymnastics and were both training at the number one diving club in the United States, The Ohio State Diving Club, Sean also saw a great deal of potential in me. I committed to the application process at Princeton University soon after George.

“Ever since George and I were young, we have been very competitive. It is always healthy, and I think the constant competition is helpful in training and bettering ourselves. We look forward to continue to push each other at Princeton and beyond. We are very excited to see how far we can go in the sport. We have recently started training synchronized diving (which is not an NCAA event, but for USA Diving and international competition) and have hopes of competing together nationally in the future.”

The Callanan twins don’t have many official meet results yet because they began competitive diving in earnest just as the season shut down owing to the coronavirus pandemic. Nonetheless, they placed 1st and 4th at the Ohio State High School Division 2 Championships last season as juniors. In 2019, George finished 4th and Taso was 7th.

The twins will join verbally-committed Brett Fayerick and Tyler Hong in the Tigers’ class of 2025.

What a package deal for the Tigers!

Three cheers for the Callanan brothers!

Divers are so important and even more so at the Ivy Championship meet. I’m excited to see Taso and George become huge contributors!

It is excellent to see Princeton’s strong performance in diving continue! Go Tigers!

Congrats! It’ll be fun to watch your progress over the next few years.

Great to see PUCSDT recruiting strongly on the boards!

Welcome to the Tigers, gentleman!