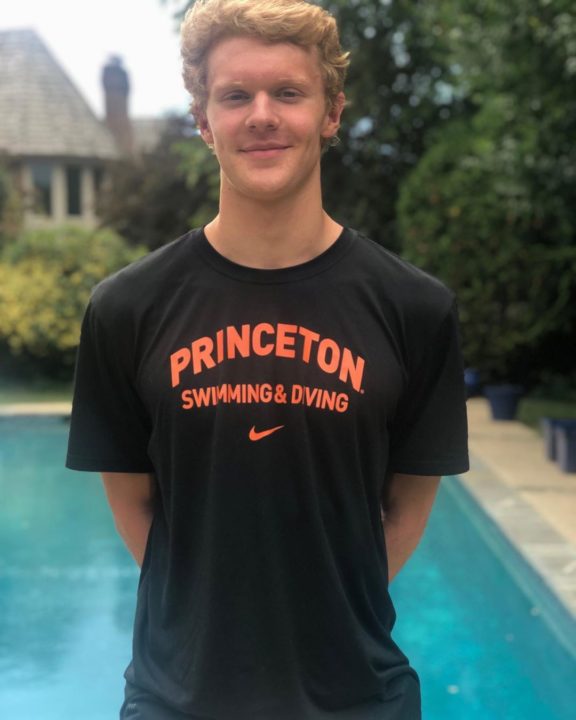 Feyerick set the U.S. National Age Group (NAG) record in the 11-12 50 yard backstroke in 2015, going 24.22, though that record has since been lowered. Current photo via Brett Feyerick

I am incredibly honored to announce my commitment to the application process at Princeton University! I would like to give a special thanks to my family, coaches, teachers, teammates and friends for their ongoing support and encouragement throughout this process. Go tigers

Feyerick set the U.S. National Age Group (NAG) record in the 11-12 50 yard backstroke in 2015, going 24.22, though that record has since been lowered. He also used to hold the 10& under 50 back NAG record. Since his early age group success, Feyerick has honed his backstroke speed, while he’s also a strong sprint freestyler and 200 IMer.

Princeton, a program that finished runners-up at the 2020 Ivy League Championships behind Harvard, will benefit immediately from Feyerick’s speed. He would’ve been their #1 100 and 200 backstroker last season, while he would’ve been among their top sprint freestylers; they had a few 20-lows and one 44-low last year, but nobody faster.

At the 2020 Ivy League Champs, Feyerick would’ve made the 100 back A-final and the 200 back B-final. He’s the first announced male Princeton commit for the class of 2025 so far.

Congrats. Be prepared to not swim

You’re a mean one, Mr. Grinch

Your congrats sound insincere. He is a rising HS senior. If the pandemic is still as bad a year from now, we would have a lot more serious problems than not swimming. For now, congrats to Brett and the Feyerick family.