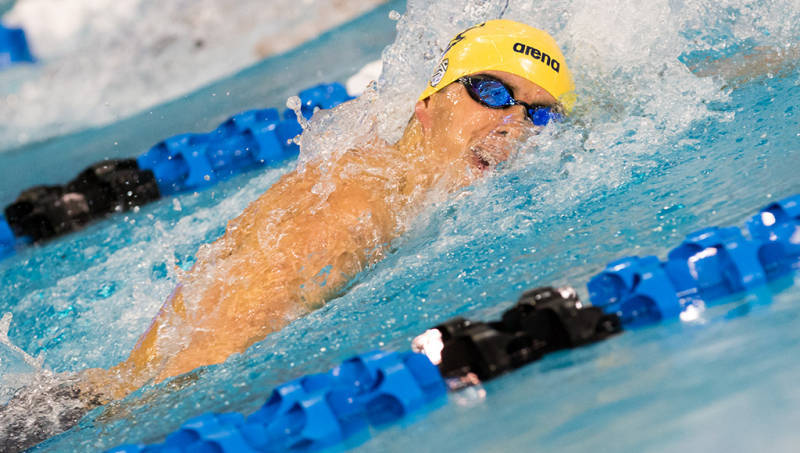 The #22 USC Trojans traveled to Berkeley, CA, for their weekend Bay Area showdowns with #7 Cal and #12 Stanford. This afternoon marked Cristian Quintero‘s debut for the Trojans after he didn’t compete for the Trojans during the fall semester. The Venezuelan Olympian won the 200 free against the Golden Bears, his first individual race back. Taking Cal’s Trent Williams to the final 50 yards, as the two split within hundredths of one another at the 150 mark, Quintero finished tough for the win (1:36.99) over Williams (1:37.44).

The exciting race came shortly after an intense 200 medley relay matchup. Cal currently holds the 2nd fastest time in the country (1:24.15) from the Georgia Invite, but Chuck Katis got switched onto the Golden Bears’ B relay and Josh Prenot moved to the A for the breaststroke legs. Prenot swims the 200 breast far more often than the shorter breaststroke distances, Katis’ specialty, so there’s reason to believe that Cal was looking to 1-2 the Trojans to get off to a hot start at home. This wasn’t the case, however, as Trojan breaststroker Morten Klarskov caught right back up to Prenot after Ryan Murphy took a big half-second lead over Luca Spinazzola. Trojan sophomore Dylan Carter edged Cal freshman Justin Lynch on the fly leg, and Quintero matched Tyler Messerschmidt‘s 19.91 anchor leg as the Trojan A relay upset the Golden Bears. Not only did Cal place 2nd, but USC’s B relay actually tied them thanks to a furious 19.28 anchor from Santo Condorelli. The Trojan A relay touched at 1:27.93, followed by Cal’s A and USC’s B at 1:28.05, and finally Cal’s B just behind in 1:28.30.

Quintero did not look very sharp in his final event, the 500 free. He, Adam Hinshaw (Cal), and teammate Reed Malone were each out in 1:47’s, but Hinshaw and Malone pulled ahead over the next couple of hundred yards. Malone led Hinshaw going into the final 50, but the Golden Bear dug deep to prevail (4:28.07) over Malone (4:28.45). Quintero was a ways back, touching at 4:31.26.

The Trojans put up big points in diving, as Deon Reid won the 3 meter and Collin Pollard led a Trojan 1-2-3 in the 1 meter. Finally, Cal outlasted the Trojans in the 400 free relay as the Bears ended up on top, 173-127. This marks Cal’s 21st straight dual meet win, a streak which dates back to the 2012-13 season.

The Trojans face #12 Stanford in Palo Alto tomorrow at noon PT, while the Golden Bears will host the Cardinal in a Bay Area showdown at noon PT on Saturday, February 21st.

Pretty good results….especially considering it was 60 degrees, RAINY, and 30+ mph winds. not for the faint of heart!