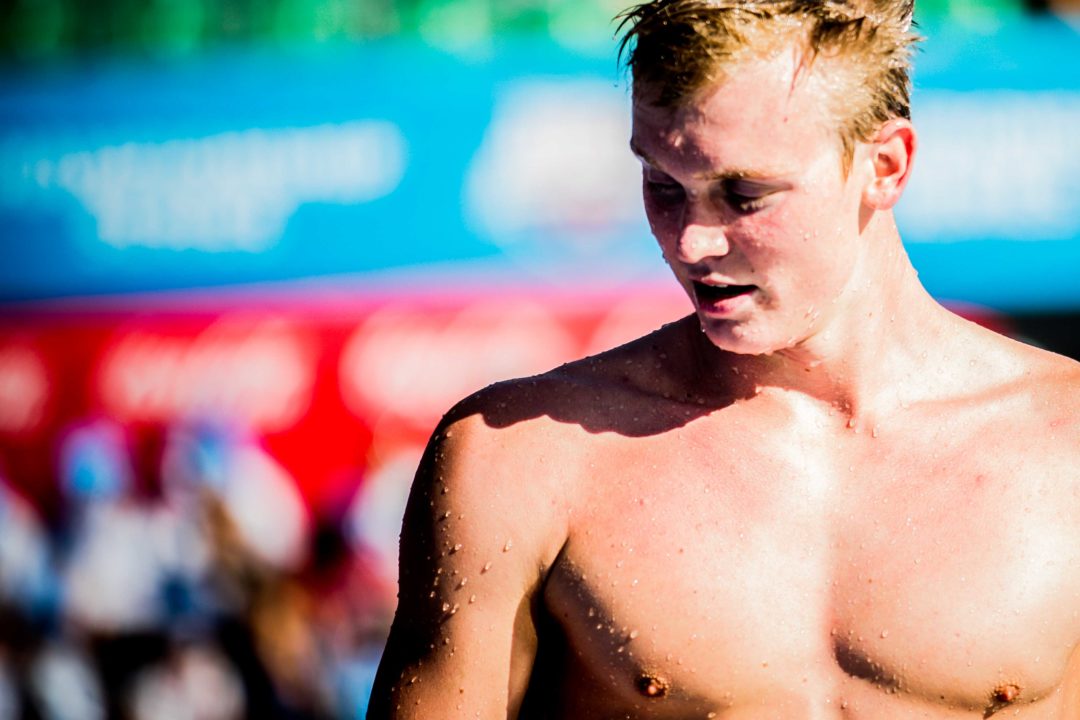 Trenton Julian blew the field away in this 200 fly final. The 22-year-old did what we were expecting: take the race out fast. Current photo via Jack Spitser/Spitser Photography

Julian touched in 1:54.71, which was a personal best by over half a second. With the swim, Julian is now the fastest American in the event this year, and the 7th-fastest swimmer in the world this year. He also rises to the #9 American all-time in the event. The 200 fly was just the first event in a full schedule for Julian this week, so we’ll be watching eagerly the rest of this week.

Harry Homans was slightly faster tonight than he was this morning, taking 0.35 seconds off his prelims time. The swim was off his personal best of 1:58.18.

Schroeder Y’s  Jack Lustig chipped another 0.39 seconds off his lifetime best from this morning, taking 3rd.

Sounds like a bad first taper for OT! REST IS KING!

What video did you watch?

This idea that it’s always about a good or bad taper is ridiculous. It completely takes away any personal responsibility or control from the swimmer. As Trenton says in the video there are and were other real factors involved in his performances here as opposed to trials finals. High performance under stress has a learning curve that is unique to each individual.

On his way to an Olympic gold medal vs. GOAT.

You hate to see it

https://www.mercurynews.com/2021/08/02/why-southern-california-is-a-new-ev-mecca-with-rivian-lordstown-and-karma-in-irvine/ Irvine is great with electric cars. Irvine is going to stopped swim meats in the future and do more electric car engineering. Yeah, he did better then either Gunner Bend or Zach Harting that happens with swimmers peaking later.

You usually have some interesting local historical perspective but as Erik says “wut”?

There are multiple Gunnars? Or is it Gunnerz?

My cousin is named Gunnar. But in Brazil, where he is from, it’s pronounced “Goon-er”. So my point is, there are definitely Gunnerz. The end. 😉

How is this getting downvotes. Cynthia is the queen of swimswam posting. She posts rationally for awhile then randomly goes off like this and you never know when it’s going to happen. All hail Queen Cynthia.

Too much caffeine this morning

I’d bet my life savings Trenton is NCAA Champion in the 2 fly next year! Dudes got a lot more coming! #Leee

It’s going to be an awesome race. But…Nick Albiero is coming back too.

And Luca Urlando too I believe

Yep, that’s another one.

This could be the race-of-the-year on the men’s side.