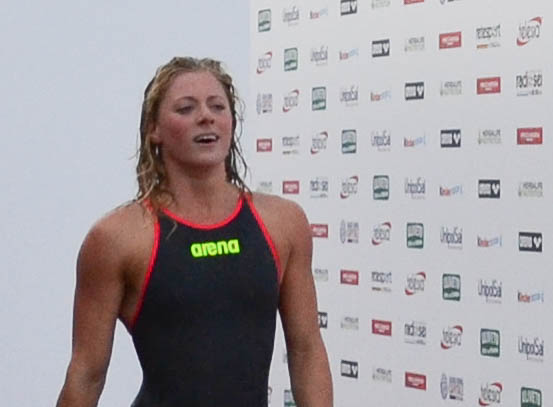 Kira Toussaint and Arno Kamminga kept the ball rolling on day 2, in Budapest. with the pair continuing their record-breaking streaks. Archive photo via Giusy Cisale

Yesterday both Kira Toussaint and Arno Kamminga fired off new Dutch national records while competing on day 1 of the 2019 FINA World Cup Series stop in Budapest. Both swimmers kept the ball rolling on day 2, with the pair continuing their record-breaking streak en route to 2 more gold medals.

On day 1, 25-year-old Toussaint produced a 50m back time of 27.68 to beat the field and overtake the Ductch supersuited record left over from the 2009 World Championships. The previous Dutch standard stood at 27.77 from Hinkelien Schreuder‘s performance 10 years ago.

Tonight, Toussant tore about the women’s 100m backstroke event, stopping the clock in a time of 59.56. That cleared the field by .30, with Russia’s Mariia Kameneva hitting the wall next in a time of 59.86.

Splitting 29.18/30.38, Toussaint’s time tonight not only topped the podium but surpassed her own Dutch standard of 59.80 notched both at the 2018 FINA World Cup stop in Kazan, as well as at the Mare Nostrum Tour in Marseille earlier this year. Splits for the Marseille swim included 28.62/31.18 showing how her time tonight was much quicker on the back end.

As for Kamminga, the man hit a new 100m breaststroke record last night of 59.05, lowering his own previous NR of 59.14 established at the 2018 Sette Colli Trophy in Italy.

This evening, the 23-year-old cranked out a heats swim of 27.00 to take the top spot in the men’s 50m breaststroke. That checks in as Kamminga’s fastest-ever, beating out the Dutch NR in the process. The previous mark stood at the 27.02 Ties Elzerman registered at the Eindhoven Swim Cup, but Kamminga now owns all 3 breaststroke Dutch national marks with his morning swim.

Although he finished slightly off the mark in a final time of 27.13, his night result was enough to top the podium.