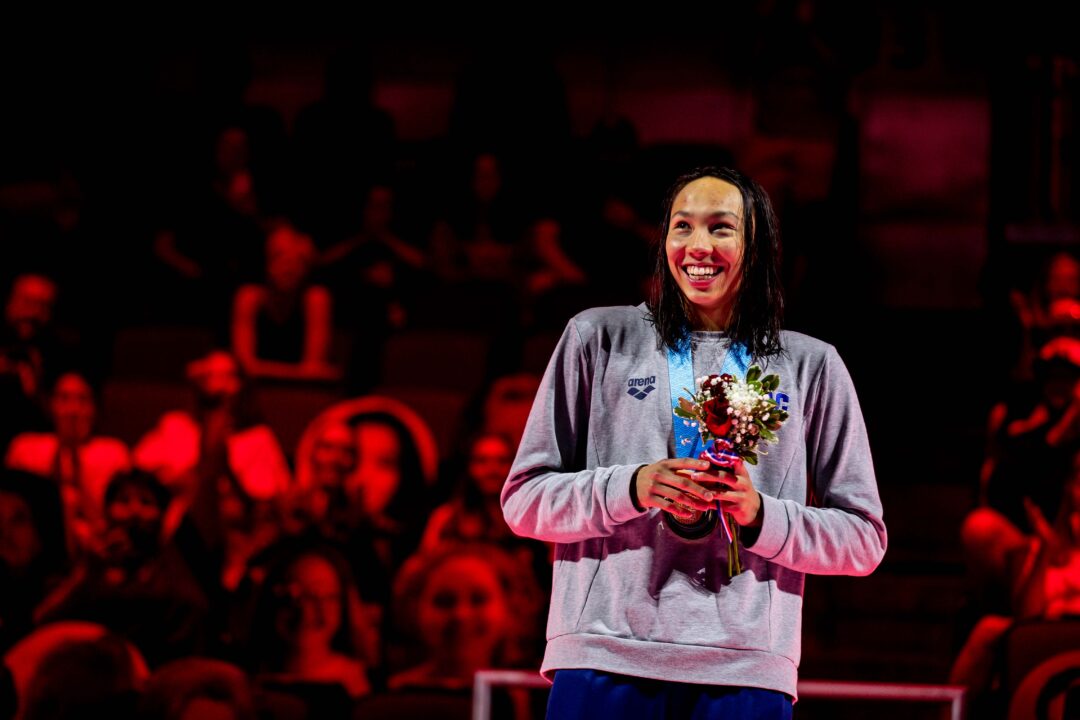 Sprinter Torri Huske won the 1000 freestyle in a time of 9:51.06 in a dual meet as the Stanford women defeated Arizona State. Archive photo via Jack Spitser/Spitser Photography

The Stanford women won the meet with a score of 160-90. They won 13 out of 14 events (not including diving). Stanford exhibitioned all non-first place finishes after the 50 freestyle.

Stanford kept their momentum going as freshman Torri Huske swam a time of 9:51.06 in the 1000 freestyle to earn the victory. This was her first time swimming the event for Stanford and it places her 22nd in the NCAA this season. Senior Morgan Tankersley swam to second in a season best time of 9:54.26. Freshman Aurora Roghair touched in third in a time of 10:04.16. ASU’s Emma Nordin, who holds the top time in the NCAA this season in the event, took fourth in a time of 10:12.77.

The Cardinal’s swept the 100 backstroke. Junior Taylor Ruck led the way swimming to a time of 52.97. Her time was just off of her time of 52.74 from midseason. She was followed by senior Lucie Nordmann (54.04, dual-meet best) and junior Alexandra Crisera (54.10, dual-meet best).

Raab leads a small breaststroke group at Stanford after Zoe Bartel announced her retirement earlier in the season. Without Bartel, the pressure ramps on Raab heading toward the NCAA Championships, as the breaststroke races are currently the team’s biggest weakness.

Freshman Regan Smith won the 200 butterfly in a time of 1:55.85. This was about three seconds off her time of 1:52.48 from midseason which ranks her fourth in the NCAA this season.

Why isn’t Regan swimming any backstroke? It looks like she did the 2fly and 500

If Huske is doing the 1000, I’d venture a guess and say they’re not doing primary events.

She did pretty well against Arizona in the backstrokes yesterday. Don’t recall exact results off the top of my head but I believe 51 and 1:52.

You know people are allowed to be on both relays right??

Stanford tends to not put too much focus on the 200 MR.