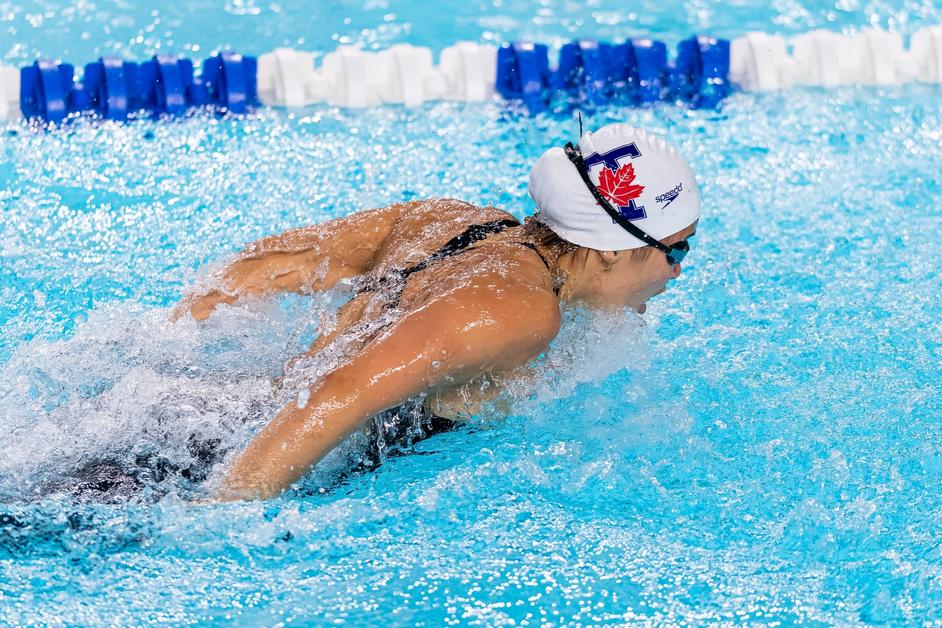 The Varsity Blues picked up a sweep at home, giving the squad a big momentum boost heading into the OUA Championships and ultimately the U SPORTS Championships in February.

Longtime Toronto head coach Byron MacDonald spoke on the magnitude of having an in-season battle with one of the top team’s in the country and how pleased he was with how the team responded.

“This was a huge meet,” MacDonald said. “Both for the competitive aspect and also the fact that it happened at all. U SPORTS swim teams rarely travel cross country for dual meets so the initiative by the University of Calgary to come East was a big deal. We went there about a decade ago but I still want to thank their head coach, Mike Blondal, for making it happen this year.”

The Toronto women, who are defending national champions, topped Calgary by a final score of 89-58, while the Varsity Blue men upset the Dinos, 81-70.

“I was very pleased with how our swimmers responded to the challenge of the Dinos,” continued MacDonald. “We won almost all the close races and posted some very fast in-season times. Upsetting their men’s team to win the meet was a coup for sure.”

Each team could earn a maximum of eight points per event (5-3-2-1, with the top two from each team scoring).

Toronto won nine of 14 women’s events on the schedule to secure a big victory, with first-year standout Nina Mollin leading the charge with three individual wins while also contributing to the victorious 400 medley relay.

Mollin’s time in the 200 fly would’ve placed second at last year’s U SPORTS Championships, while her 200 IM showing would’ve been third.

Another highlight of the meet came in the women’s 800 free, where Dino fourth-year Marit Anderson (8:48.12) out-touched Varsity Blue second-year Anna Hein (8:48.13) by one one-hundredth.

After falling out of the top three for the first time in more than a decade at last year’s U SPORTS Championships, the Toronto men look extremely strong this season, and that was on full display Saturday as they placed first in 11 of 14 events to upset Calgary, who were the U SPORTS runners-up to UBC in 2022.

Currently in his second season at Toronto, Mastromatteo won the 100 breast, placed second in the 50 breast and was fourth in the 200 breast at the U SPORTS Championships last year.

Calkins was the only male swimmer to win three individual events, as the Canadian Commonwealth Games representative also picked up a dominant victory in the 50 free (22.28) and secured a narrow win in the 50 fly (24.37). In the 200 free relay, he led off in 22.25, nearing his lifetime best of 22.15 set earlier this season.

Other standouts for Toronto were second-years Jacob Gallant and Liam Weaver, along with first-year Benjamin Loewen.

For Weaver, although he didn’t have an individual win, he had a pair of blistering freestyle relay splits, anchoring the 400 medley relay in 49.52 and then posting a 21.85 second leg on the 200 free relay.

The other winner on the men’s side was Toronto first-year Quinn Matteis, who reeled off his second straight 8:10 800 free in a week, clocking 8:10.08 to top the field by 11 seconds. In a tri-meet the previous weekend, Matteis set a new best time of 8:10.02.

Great to see Canadian teams competing in these kind of meets.There,s way too few initiatives like this which promote competition and solid reasons to train hard.Byron Macdonald and Mike Blondal are the most progressive coaches in Canadian University.Hopefully other programs take note and create opportunities for their swimmers to excel.Overdue…no?