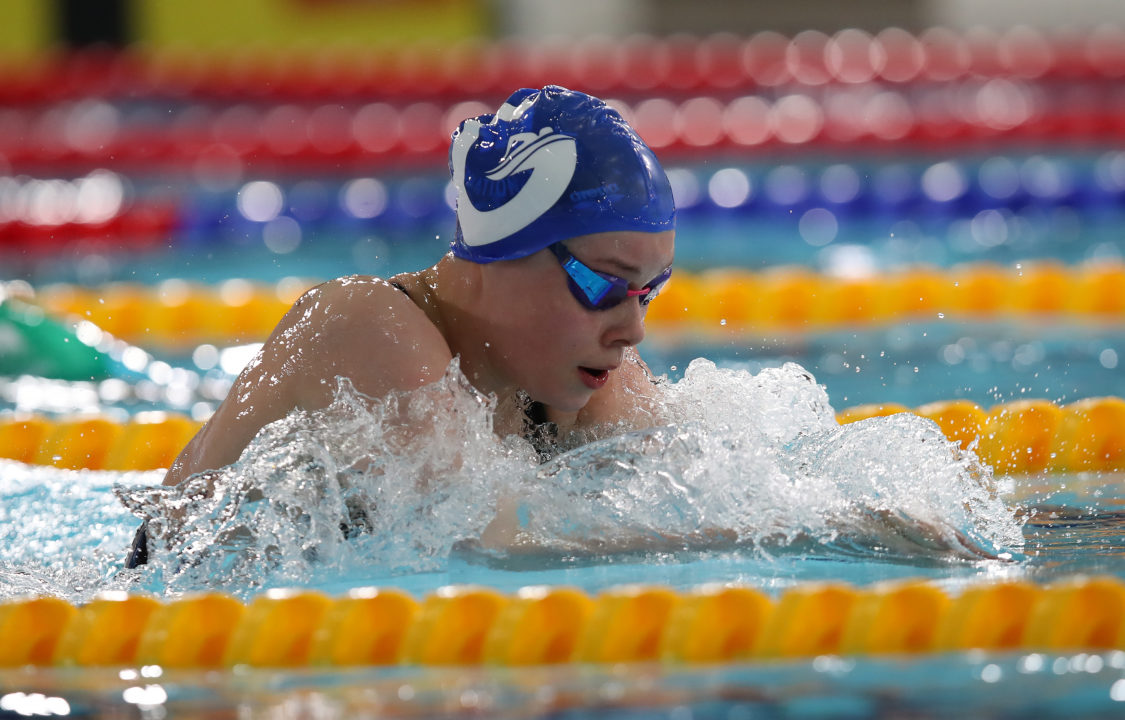 Katie Shanahan of Great Britain took home 3 individual gold medals and her 200m back is among our top 5 swims from the 2019 European Youth Olympic Festival. Archive photo via , Ian MacNicol for Scottish Swimming

With the World Championships in Korea monopolizing the swimming spotlight this past week, several notable swims taking place at the European Youth Olympic Festival in Baku, Azerbaijan went under the radar. You can catch up on each day’s EYOF SwimSwam recap below.

Additionally, we’ve selected 5 swims for our top performances of the meet for the men here, but now it’s the women’s turn. Several of the swimmers contesting events at this EYOF will be in action this August again, competing at the 2019 FINA World Junior Championships.

British breakthrough star Katie Shanahan captured 3 individual gold medals at the EYOF, including the 200m IM, 400m IM and 200m back. With her 3 golds, she accounted for exactly half of the total 6 gold GBR would bring home from the EYOF. The 15-year-old’s most eye-opening performance, however, came in the 200m back.

Shanahan touched in 2:11.20 to top the women’s 2back podium, taking down the previous EYOF Record of 2:11.57 set by Russian Daria Vaskina in 2017. Vaskina just took bronze in the women’s 50m back at this year’s World Championships in Gwangju, Korea.

Shanahan’s 2:11.20 time outperformed this year’s European Junior Champion Erika Fransesca Gaetani of Italy, who had to settle for silver in 2:12.03.

The Briton’s outing destroyed the teen’s previous personal best of 2:13.68 registered just this year at the British Swimming Championships. Her Baku time established a new British and Scottish Age Record for 15-year-olds in the 200m back, as well as moved the City of Glasgow swimmer into the 21st slot among all-time British performers at any age.

Her 400m free performance was especially impressive, with the teen firing off the first sub-4:10 outing of her young career in 4:09.71. That result proved good enough to establish a new EYOF meet record destroying the 4:15.17 put up by Russia’s Maria Baklakova back in 2011.

For perspective, Boecekler’s 4:09.71 would rank as the 12th fastest performance in history by an American aged 15 or 16.

Russian 14-year-old dynamo Evgenia Chikunova blasted a 200m breaststroke time of 2:24.15 to beat the field by over 3 seconds en route to gold. Chikunova was this year’s European Junior Champion in this event, taking the title in Kazan in a time of 2:23.06. However, the teen was much quicker in the semi-finals, producing a new lifetime best and EJC Record of 2:21.07, a time that would stand up at any elite international championship meet.

Prior to that, Chikunova was shaking things up domestically, outshining Olympic champion Yuliya Efimova at the Russian Nationals this past April. There, Chikunova blasted a then-personal best of 2:22.67 for a new Russian Junior Record.

Chikunova’s 2:24.15 gold medal-worthy effort from Baku remarkably would have finished 6th in the women’s 200m breast final at the 2019 World Championships in Gwangju.

Russia’s Aleksandra Sabitova owned the women’s 100m fly event from prelims to semi-finals to finals here in Baku, ultimately topping the podium in a time of 59.07. That checked in as a new personal best, overtaking her own 59.21 logged for silver at the European Junior Championships earlier this month. There in Kazan, the 15-year-old finished behind Belarusian Anastasiya Shkrudai’s monster 57.39.

Sabitovaa represented the only sub-minute 100m flyer in Baku, however, overtaking the previous EYOF Record set by the aforementioned Shkrudai back in 2017.

Sabitova now ranks as the 2nd fastest European female under 18 this season.

At just 14 years of age, Erika Francesca Gaetani is already making a name for herself in the backstroke discipline internationally. The Italian took the gold medal in the 200m back, as well as silver in the 100m back at the 2019 European Junior Championships in Kazan, but did a reversal here in Baku.

Gaetani finished in the silver position behind the aforementioned Shanahan in the 200m back in 2:12.03, but fired back with a personal best of 1:01.17 in the 100m sprint to get the gold.

Entering Baku, Gaetani’s personal best in the 100m back rested at the 1:01.62 she produced for silver in Kazan behind Russian Daria Vaskina. Her swim here in Baku sliced almost half a second off of that mark and fall just .09 shy of Giulia D’Innocenzo’s 1:01.08 Italian Junior Record.

Really good to see Shanahan & Osrin (2.10.30) coming through in the 200bk. We havent had anybody close to finals in the event for many, many years now. Hopefully they can kick on in the next 2-3 years.

Great swim by Katie – but I swear Elizabeth Simmonds was faster than 2.11 at 15?

Interesting. Yep, I have to agree nice breakthrough performance. What times did the top 200 backstrokers in the world go when they were 15?

I don’t think anybody expects a generational talent out of Shanahan – But she is clearly a good swimmer with a lot of potential. She has Junior eligibility until 2021, so she could well end up ahead of the ‘norm’ RE times. Agree RE Gaetani.

And for some reason I thought it would have been Sexton!

For the 200 Smith was 2:07 at 15, once during the WC semis in Budapest and again at the World Juniors. She was 59.1 in the 100 Back at World Jrs. That’s not necessarily the ideal comparison as it seems the back is just one of Shanahan’s events. She looks more like a Beisel type swimmer. Good in the back but also the IM and perhaps other events. Plus many of the world’s greatest backstrokers don’t really break out on the international stage until their late teens (Coventry, Masse, etc).

Maybe because British Swimming spent a number of years refusing to pick their best W200 Back swimmer for any meets.

We picked Jessica Fullalove for worlds who won British Trials. She still only ended up 15th so I think with this event the issue is more with the lack of depth.

I think Shanahan makes the olympics in the 200 back next year. Then, after that I think our main IMers – Miley, Willmott and O Connor will retire and she will also make the team in the IM events.

She has to improve by 1 second to get the standard, doesn’t seem impossible. In the 400 IM she would have to improve by 5 seconds, which seems rather unlikely.

I think she might too – Heard her name a few years ago as one to watch and she’s progressing nicely.

Are those supposed to be in order? If so, then i have to ask how anyone can consider Shanahan’s and Boekecler’s swims more impressive than Chikunova’s swim … ?