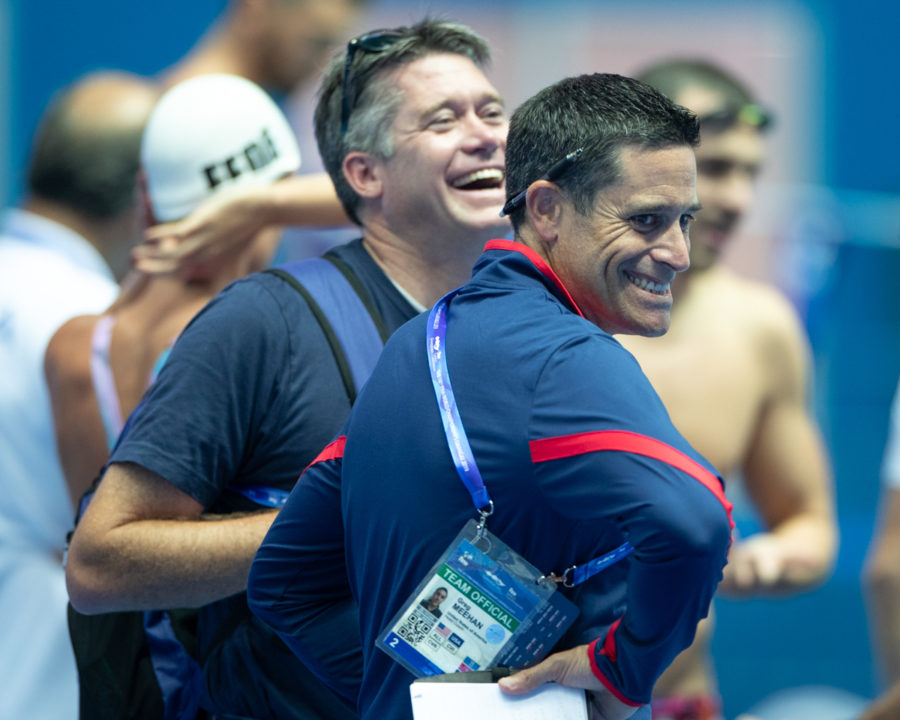 Stanford (and Team USA) head coach Greg Meehan is proving he knows how to handle choppy waters, even when things don't go according to plan with his stars. Archive photo via “Rafael/Domeyko Photography” 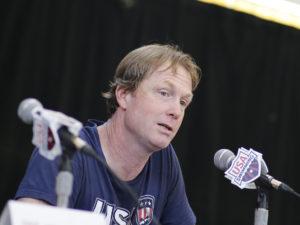 Last summer, Meehan navigated a mono diagnosis for one of his stars, Ella Eastin, paring down her event lineup on the fly to make one run at an international travel berth in the 200 IM and succeeding. That paid off in a World University Games silver for Eastin this summer, along with a late addition to the World Championships team when Kathleen Baker was injured and pared down her own event lineup.

Meehan actually followed a similar strategy this year with Katie Ledecky, who lost a 400 free in a major upset while fighting illness. Team USA admitted after the 400 that Ledecky had felt unwell since arriving in Korea, and Meehan went back to his Eastin strategy to try to salvage Ledecky’s week – and the U.S. medal total. Meehan and Ledecky scratched the 1500 free final as well as heats of the 200 free. That allowed her two days to rest and recover before jumping back in for a key leg of the 4×200 free relay, where the U.S. won silver. Ledecky had the team’s best split.

Ledecky was then able to make the 800 free final through heats the next morning, then had one more evening and morning to rest before taking on the 800 free final and a rematch with Australia’s Ariarne Titmus, who had upset her in the 400, and Italy’s Simona Quadarella, who won the 1500 in Ledecky’s absence.

In that swim, which we could arguably call Ledecky’s ‘Flu Game’ (in an homage to NBA great Michael Jordan), the 22-year-old gutted out a brutal come-from-behind win after trailing Quadarella with 50 meters to go.

Had she tried to swim her full lineup, would Ledecky have had the burst to do that? Hard to say. A 200 free/1500 free combo would have been brutal, and the 200 free field strong enough that scratching was probably the right call. Ledecky is good enough in the 1500 to win even without being near her best (10 times in her career she’s been faster than Quadarella’s winning time), but the effort may have burned her for the rest of the meet and perhaps even delayed her recovery. Meehan gets credit for navigating the illness to still get one gold and three silvers out of Ledecky.

Even Simone Manuel‘s meet didn’t start out on a high note. Some were even writing her off after a strong 51.9 split looked pedestrian next to a 51.4 from Cate Campbell on the 4×100 free relay, with Australia beating the U.S. Many more jumped on that train when Ledecky split 52.3 and was badly run down by Campbell for gold in the mixed 4×100 medley relay. Many were critical of the decision to swim her on the 4×200 free relay. A smattering of comments from early in the meet:

A rough outing like that can shake a swimmer. So much of the sport is confidence and momentum, and Manuel had reason to question how much of both she still had. Reading the SwimSwam comments section at the time would have been a very bad idea for the 22-year-old.

Credit to Meehan, who kept his athlete focused and confident. And what a finish to the meet she had. Manuel first hit a massive personal-best leadoff on the 4×200: 1:56.09. From there, she went on to hit a lifetime-best in the 100 free, upsetting both Campbell and Sjostrom to win her second consecutive world title and her third major 100 free upset, counting the 2016 Olympic title. If that wasn’t enough, Manuel beat Sjostrom and Campbell again to win the 50 free, cementing her status a perhaps the best true racer on the planet – she may not always have the top time in the world ranks, but Manuel continues to prove she knows how to get her hand on the wall first in a head-to-head showing.

Manuel would also blast a 51.8 anchor leg of the world record-setting 4×100 medley relay, bringing her to a record 7 medals in a single World Championships.

The pure medal totals might not suggest a banner meet for Meehan’s swimmers relative to expectations. But he’s proving time and time again that his strength is navigating adversity, strategically working to maximize not what fans project his athletes to have, but what they do have at the current moment, whether that’s impacted by illnesses, injuries or a bad swim or two to open the meet.

Meehan also gets credit for current Stanford swimmer Katie Drabot‘s 200 fly bronze. And he probably gets at least some level of credit for the three relay bronzes won by Taylor Ruck, a Stanford Cardinal this fall, winter and spring before contributing to Team Canada this summer. More excitement for the future: Meehan’s big recruiting get of this year was Regan Smith, the #1 swimmer in the United States among rising high school seniors. Smith was trained by her club coach Mike Parratto, but in her first limited stint with Meehan (from U.S. training camp through Worlds), she had absurd time drops and broke two world records. That’s reason to believe the working relationship between Smith and Meehan is off to a great start looking towards the 2020-2021 NCAA season in which Smith should be a freshman.

Giving Meehan any credit for Regan Smith is ludicrous; that’s Mike all the way. He did and has done a great job with Manual, no argument there. Highly debatable with Ledecky. Maybe he managed her illness at the meet well, but he also has to be accountable for her technical deficiencies (that she has now but did not have with Gemmell). So yes, he sort of put a bandaid on his own mess but I think we’d all be fools to assume a healthy Ledecky was going to surpass her Rio times. Ruck was underwhelming. Drabot was solid but Eastin has struggled all year, mono aside. No arguments that Meehan is a great coach, but let’s keep things in reality.… Read more »

Agree on all accounts…. except on Regan Smith. Let’s give all credit to Mike Parratto. First training trip doesn’t mean much. All work was done by Mike. Congrats Mike and Regan.

Parratto is very sharp fer sure