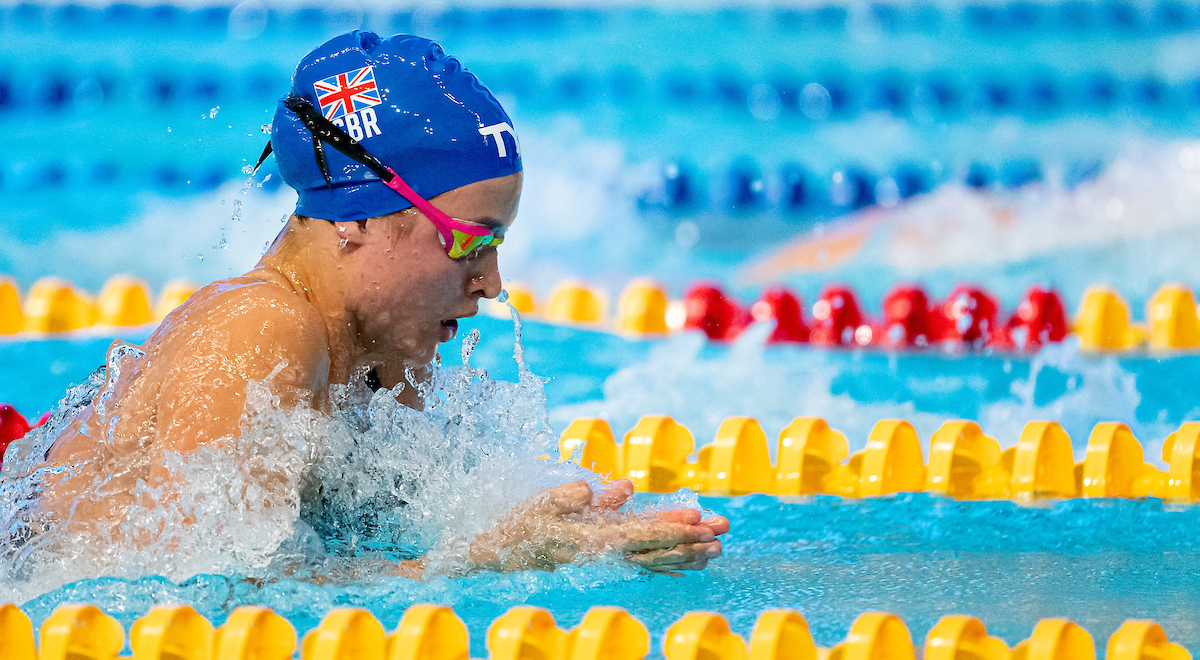 The 2019 FINA World Junior Swimming Championships kick-off on Tuesday in Budapest, Hungary. We’ve seen the initial entry lists to help build the hype, but let’s take things one step further by looking more closely at our top 10 women to watch over the course of the 6-day meet.

The following women have proven themselves on the junior, and sometimes senior, circuit, posting world-class times and putting them in the hunt for one or more medals. We published a similar post for the men, but here are the top 10 women, in no particular order.

16-year-old Anastasiya Shkurdai raced the meet of her life this past April at the Championships of Belarus, claiming 4 national titles. The teen posted a personal best of 25.87 in the 50m fly, falling just .03 shy of the Belarusian National Record set by Aliaksandra Herasimenia at 25.84 from way back in 2013. Entering the meet, Shkurdai’s previous personal best rested at the 26.62 she threw down for 50m fly silver in Buenos Aires last year at the Youth Olympic Games.

Shkurdai also nailed a winning 100m fly time of 57.78, another new personal best and the first sub-58 second time of her young career. Her 57.78 time also cleared the old Belarusian National Record of 58.09.

Competing at this year’s European Junior Championships, the Belarusian teen knocked down 2 individual golds, winning the 50m fly in 26.23 and the 100m fly in 57.39.

Pallister came very close to earning a berth on the Aussie World Championships squad, coming in 3rd in the 1500m freestyle at the nation’s Trials for Gwangju. En route to earning bronze in a new personal best time of 16:06.84, Pallister clocked a new Australian Age Record in the event, one whose previous national age standard was held by none other than her own mother.

She’s only entered in 1 individual event here in Budapest, but it’s a big one, as Rye Ulett owns the only sub-2:10 200m backstroke time of the field. Ulett is just 14 years of age and owns a PB of 2:09.70, giving her about a 1/2 second advantage entering these World Junior Championships over the next closet entrant, Erika Francesca Gaetani of Italy, another 14-year-old with whom the American shares the same birth date.

Ulett nailed her 2:09.70 at this year’s U.S. Nationals with the outing making her the only 13-14 American woman ever to dip under the 2:10 threshold besides National Age Group Record-holder Missy Franklin.

Another 14-year-old on our list of ones to watch for the World Junior Championships is Benedetta Pilato of Italy.

In April, Pilato put up a 50m breast time of 30.61 to qualify for Worlds, lowering her own previous junior standard of 31.02 established in February. Fast forward to Sette Colli in June and the teen fired off a monster time of 30.13 in the prelims to surpass the NR of 30.30.

At the European Junior Championships this year, she clocked a winning 50m breast time of 30.16, just .03 off of her aforementioned NR.

However, the teen’s grand finale came at the Senior World Championships, where Pilato took silver in the 50m breast in a time of 30.00, after having lowered the mark to a scorching 29.98 in prelims.

While competing at the European Youth Olympic Festival in Baku, Turkey’s 15-year-old freestyle ace Beril Bocekler landed on the podium across the 200m, 400m, and 800m freestyle events, hitting new Turkish National Records in each.

Her 400m free performance was especially impressive, with the teen firing off the first sub-4:10 outing of her young career in 4:09.71. That result proved good enough to establish a new EYOF meet record.

Gretchen Walsh enters Budapest as the top-ranked 50m and 100m freestyler, owning lifetime bests of 24.85 and 54.13, respectively. Walsh represents the only entrant in the 50m to own a sub-25 second outing, with her 24.85 having come at this summer’s U.S. Nationals.

The result marked the first time Walsh broke 25 seconds, bettering her personal mark of 25.03, which she swam at the 2018 U.S. Nationals. Walsh’s previous best had her at #3 all-time for the girls 15-16 age group, and her new time ties her as the 2nd fastest U.S. woman ever in the age category.

Rocking the Russian swimming world at their championships this past April, 14-year-old Evgenia Chikunova blasted a winning time of 2:22.67 to take 200m breaststroke gold, breaking the Russian Junior Record in the process.

The Russian teen followed up with double gold in the 100m/200m breast at the European Youth Olympic Festival. There in Baku, Chikunova topped the podium in respective 100m and 200m breast times of 1:08.03 and 2:24.15.

Freestyle ace Miyu Namba of Japan is just getting started, clocking lifetime bests at the Japan Swim and Japan Open to kick-off her breakthrough year.

Along with Pilato of Italy, Russia’s 17-year-old Daria Vaskina sets herself apart from the field as another Senior World Championships medalist. Vaskina took the 50m backstroke bronze in Gwangju in a time of 27.51, giving her the top-seeded time for Budapest.

Vaskina is also the top-seeded 100m backstroker, owning a personal best of 59.46 at the Russian National Championships, a time that stands as the Russian Junior Record in the event.

Vaskina was also the 2018 European Junior Champion in the women’s 50m and 100m backstroke events and repeated the feat this year in Kazan.

16-year-old Kayla Van Der Merwe of Great Britain surprised even herself at the 2019 European Junior Championships by claiming gold in the women’s 100m breaststroke.

Her 1:07.12 notched a new British Age Record for 16-year-olds, with the previous mark held by Olympian Siobhan-Marie O’Connor since 2012.

Pilato’s NR is actually 29.98 which she swam in an earlier round in Gwangju.

Chikunova was also faster in semis at the Euro Juniors – 2.21.07

Pilato made a big cry-face when she got silver at the WCs in the 50 breast. Lilly King gave her a hug.

*in Buenos Aires last year at the Youth Olympic Games

Not sure how she’ll go here as she has already raced Euro Juniors and Summer Nationals in the last 2 months, but Van Der Merwe is one to watch very closely over the next 12 months. I saw her at the end of 2018 and I was so impressed I name dropped her on here at the time – She hadn’t cracked the 1.10 barrier back then but she looked an incredible natural athlete; So pleased it has all come together for her.

I see her, Honey Osrin and Archie Goodburn as our main medal contenders.

Meg Harris in freestyle sprints is one to watch too