Tiburon Sprint Classic: Battle of the Sexes, Can Rowdy Beat the Girls? 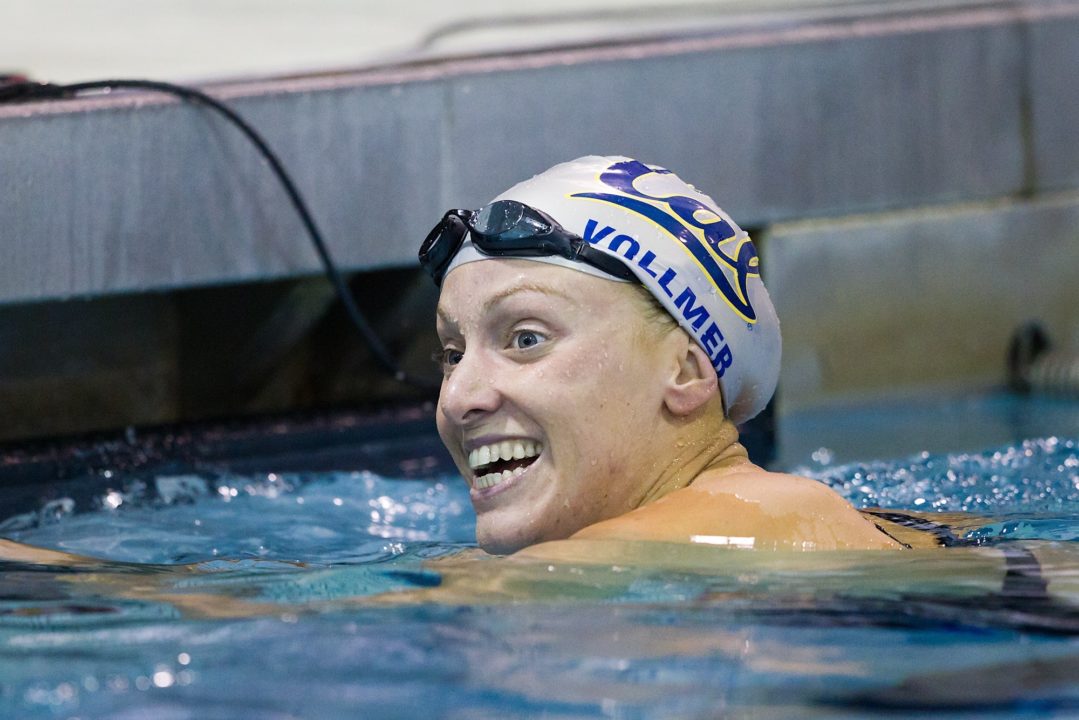 Swim News: Look out Rowdy, Dana Vollmer, Arianna Vanderpool-Wallace, and a slew of other elite sprinters are coming for you. (Photo Courtesy: ©Tim Binning/TheSwimPictures.com)

He doesn’t just ride on his past accomplishments in the pool, however. In fact, he’s getting better with age in some respects. The multiple-time World Record holder broke his own 50-54 National Record in the 50 yard free in April of 2011 with a 21.36, which is better than he was either at 51 or 50.

That, however, was the last time he took on an individual swim, and specifically a 50 yard freestyle. This coming weekend at the Tiburon Sprint Classic (the pool counterpart to the Tiburon Mile event in California), Rowdy will have the chance to shake the rust off as he faces some of the best female sprinters in the world for bragging rights.

Among the elite athletes confirmed to be participating on the women’s side are Lara Jackson, Arianna Vanderpool-Wallace, Liv Jensen, Kara Lynn Joyce, and Dana Vollmer. There are expected to be three heats of women battling for the fastest overall time, with the winner getting the opportunity to race Rowdy for the Battle of the Sexes championship.

Here’s the real question: can anybody beat him? The age is the great equalizer here. Rowdy is the best ever at his age, but he’s facing off against four of the six fastest 50 yard freestylers in women’s swimming history.

“”I look forward to swimming’s first version of ‘Battle of the Sexes’ when I take on some of the fastest women in the world in this weekend’s Tiburon Sprint Classic,” Rowdy said of the opportunity. “I was only 14 when Bobby Riggs played Billie Jean King in the ultimate Battle of the Sexes in tennis and honestly, I was devastated when he lost. And now, I get my chance to make up for that loss by showing how an old man can still keep up with today’s women swimmers.”

Gaines isn’t afraid to drive up the stakes with a bit of good-natured pre-race smack talk. “I am a father of 4 daughters and these swimming women can’t beat me anymore than I’ve been beaten already at home. I look forward to taking on any and all of those ladies blindfolded and with one hand tied behind my back.” (Have I mentioned how much I love Rowdy?)

Jackson (21.27), a former Arizona Wildcat, and Vanderpool-Wallace (21.34), a former Auburn Tiger, have both been faster than Rowdy’s 21.36 World Record. Vanderpool-Wallace probably could have been even better (some have speculated under 21) were it not for focusing on the Olympics last season, where she made the final.

Liv Jensen has been close as well, with a 21.48 from last year’s NCAA Championships. She’s got two NCAA titles in the race under her belt as well. Kara Lynn Joyce has been out of college the longest, and therefore has gone the longest since swimming a 50 free that mattered, but she was once the NCAA Record holder herself at a 21.63.

The big mystery will be Dana Vollmer. After her World Record breaking performance in the 100 fly at the Olympics, she is looking incredibly strong. Heck, it would be hard to pick against her going a 22-low if she were swimming butterfly right now. She’s only swum one 50 yard freestyle in the last two-and-a-half years, and though she’s never been faster than a 22.0, one would have to believe with her development over the last two years, she would be in the 21-mid range as well.

That which at first might seem like a longshot for an upset has suddenly become feasible with how fast female sprinters have gotten. The best Division I women are certainly good enough to make D-II men’s teams, if not some DI mid-major teams.

It’s been a while since Rowdy raced. We saw him at Trials, and he definitely looked fit, but he’ll have to knock a little bit of rust off.

So who’s the pick? We’ll take Vanderpool-Wallace to upset Rowdy. She is the only of the female competitors who final’ed in this race in London, and her short course is even better than her long. She’ll be a popular upset pick at December’s Short Course World Championships in Istanbul, and this will actually be her debut after moving to Miami to train.

Rowdy was devastated when Riggs lost to Billie Jean? Even at 14, he should have known what a sexist clown Riggs was!

I think he was just having fun with it. Wouldn’t read too far into it.

Rather degrading to the females, don’t you think? Rowdy cannot stay with them.

Rowdy’s fast. Coach, he’ll give them a run for the money for sure! I think Rowdy will be 21.5-6, slightly slower than his PD, re: cool evening temperatures (which affected everyone in 2010 at the 1st Sprint Classic). Rowdy does not respond well to the cold, however, all of the swimmers will have to deal with it.

Yeah, Rowdy is fast. Have to say it is a little degrading on a different level however. Not that Rowdy isn’t someone fast to race, but to have a stunt like this pitting top women against a 50-something year old male, even if he is fast, is a bit goofy. Appreciating the women for being top women seems like a far better idea. I don’t know… makes me feel a little bit weird personally.

I’m competing in it too! #comebackkid