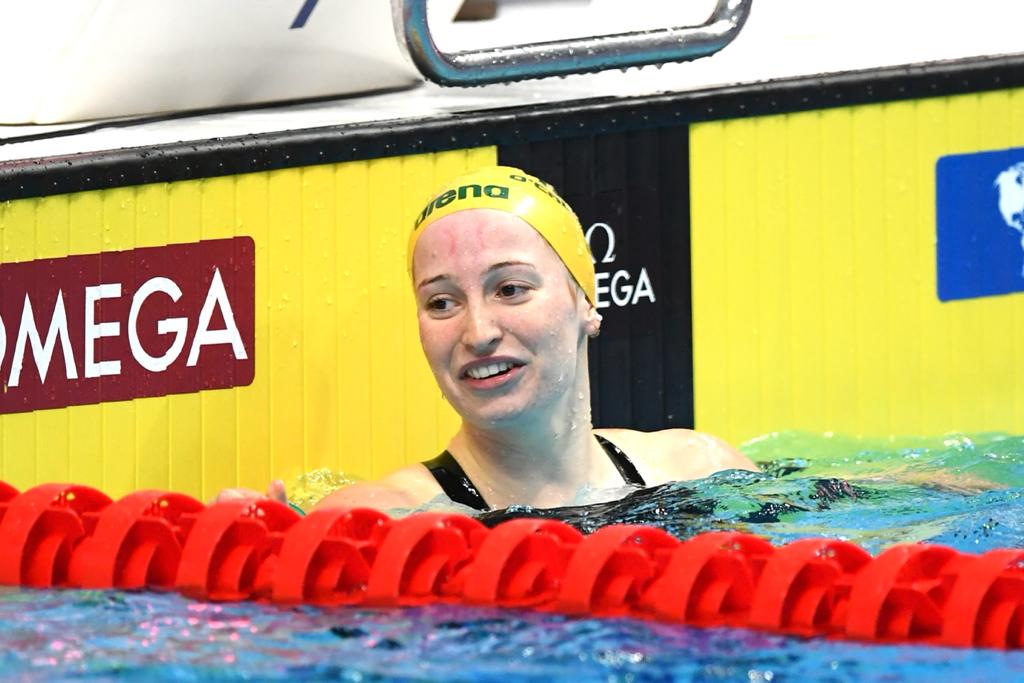 O'Callaghan becomes the fifth Australian to win the women's 100 free, making the country the most-decorated in the event alongside East Germany. Current photo via Fabio Cetti

Add 18-year-old Mollie O’Callaghan to the long list of Australian women who have had major international success in the women’s 100 free, as she joins a category with stars such as Emma McKeon, Cate Campbell, and Bronte Campbell following her World Championships title in the event today. The Australians have now won the women’s 100 free at the World Championships on five different occasions, tying East Germany as the most successful country in the event.

Countries With The Most Women’s 100 Free World Titles:

This achievement only adds onto Australia’s reputation as the best women’s sprinting country in the world. They haven’t lost the women’s 4×100 free relay in five years, and out of the 25 women who have been under 53 seconds in the 100 free, a whopping eight are Australian. But what makes O’Callaghan’s victory so special were the extraordinary circumstances that came with it.

Prior to the race, O’Callaghan said she had suffered a leg cramp, and was extremely nervous during warm up. But despite the pressure, she still pulled through, winning with a time of 52.67. Another unique thing about her win was the way she paced her swim. Opening in 25.96, she flipped in sixth at the 50-meter mark, but then charged home in a closing split of 26.71 to take the victory. And if you thought that back half was fast, you should check out her semifinals swim, where she nearly even split her race 26.42/26.43 and recorded the fastest 100 free back half in history.

The way O’Callaghan races is nothing like the way her 100 free predecessors did. McKeon, Cate Campbell, and Bronte Campbell all opened their fastest races in sub-25.5 times, and then closed around 1.5+ seconds slower. O’Callaghan seems to be the only out of the great Aussie sprinters who tends to go out conservatively and backhalf her race rather than frontload it, which is what makes her stand out amongst champions from the past. She holds a best time of 52.49, from when she split 25.92/26.57 to win the event at Australian trials.

Back in the day,Don Talbot used to say Aus was a “distance team” ie we couldn’t compete against the USA et al in the (higher value) sprint events. So it’s still jarring for me to see Aus be so dominant in the sprints

Britta Steffen 2009 ? She was born in East Germany, O.K., but swam for unified Germany.

So proud and happy for her. If you hear her interviewed she is a humble, amazing person. At 18 I hope she continues her trajectory, builds some strength for her front halves, and takes her times into the 51’s. Our successor to McKeon and C1&2 has been unearthed.

Whilst we are talking about Australian swimming, is it just me or is the Swimming Australia website particularly poor? As of now, there are no articles on there about the performances in these WCs. None at all. Surely they have a media manager or communications person who could write an update after each day, in the way the Tennis Australia website regularly updates fans about how Australian players are doing at events each week?

It’s terrible. Their social media is ok . Website is the pits. Rankings not updated for over 2 years. Hate it

And full of errors and missing swims when they are updated. They updated the age rankings in April and all of Mollie’s Tokyo and trials swims are missing from the 17 yo rankings.

Correct Mark, has been terrible for years. No information for fans at all. The whole world thinks were all swimming crazy yet the peak body doesn’t do anything to celebrate and promote our wonderful athletes.

Hey Mark, you are 100% correct. The Swimming Australian website is abysmal. I’m not sure what’s going on, but there is no news about Budapest or the para worlds. It’s very sad that Swimming Australia are not using their website to celebrate the performances of its swimmings. 🙁

It has been bad since I can remember. Not only that, there is no merchandise, no information, poor design, very poor content.

I feel like this has been a more challenging competition for Australia compared to Tokyo, just in terms of setbacks etc… Tokyo seems more smooth sailing overall

Tokyo was pretty much ideal for us. The only events we realistically should have won that we didn’t were the M400 free and W4x200. Every other event converted, and we even picked up the surprise win in the women’s medley.

Tokyo was fantastic but I’m trying not to compare, because almost everything went right there and that rarely happens.

men’s 100 free, we should have won, if King Kyle was injury free.

Or if he didn’t breathe under the flags…

That’s because a lot of precautions were taken in Tokyo to prevent this from happening to an athlete.

True and also Tokyo is closer to home, and pre-training camp in fortress Queensland so it feels more like a backyard Games in a lot of ways

What about finals in the morning ? Compare it to Beijing 2008.

I mean, it is evident that finals in the morning was not a problem for Aussie. I wondered why some people complaining about it as if it impeded the performances of some athletes, esp in making new WRs.

Sorry I’m not understanding the context of your comment in relation to mine.. no one was complaining about morning finals at all in my comment so you Lost me there

That sucks for her, Hope she’s ok.
I too would have picked her for silver (or if not, bronze).

Oh damn. Thank goodness she already got a medal or two

Four gold medals in four Olympic events in the circumstances is fantastic. I predicted Australia would win 5 max, so looks like I’m right on the money. Best gold chance left is the mixed free relay, although we are missing one of our entrants now. Kaylee has a shot in the 200 back but I think her form just isn’t good enough at the moment. I don’t think we’re a realistic chance in any other event.

With Dressel out of the medley relay, the US go from being unbackable favourites to only heavy favourites. Australia’s weak link is the backstroke, with either US swimmer probably leading Larkin or Cooper by well over a second. Zac may be able to stay within 0.5 of Fink, and Temple swam faster than Andrew in the 100 fly semis. Then it’s Chalmers v Held in the anchor leg. Chalmers will have to do another 46.6 and hope that Held doesn’t have a 47 split in him, but even then the backstroke margin will probably decide the race. But there’s always a chance with Chalmers swimming the anchor leg.

I love the optimism but I don’t buy it. I will eat my hat if the US doesn’t win the men’s medley. Even if Kyle swims out of his skin, the US beat Aus and GB in 3/4 legs. Temple was faster than MA by 0.04 but MA was faster in the heats.

As I said, the US are still heavy favourites. But there is a (slight) chance now. With Dressel swimming butterfly, there was none.
Further, Michael Andrew has been known to collapse under pressure, and he must be tired after all his swims so far. But Australia needs a number of things to go right, as you note.
Both nations are missing injured/sick stars in the mixed freestyle relay,
but again Dressel is the bigger loss. Maybe Kyle/Jack/Madi/Mollie can pip the US.

The only way USA is losing the M4XMED is via “their own misadventure”; ie a break or missing the bus to the pool ……. or the team collectively coming down with COVID. Larkin has been sinking this relay with inerring accuracy since 2017 & Cooper hasnt had his 100 act together. AUS will most likely ceding 1.5sec plus after backstroke. TBH, if AUS medals here, even with a weakened field, it would be a bonus.

MFR is frankly a lottery. AUS at full strength vs USA at full power WOULD be a tantalising prospect but that’s now what we’re going to see. Whichever team wins should mark it down in the bonus column.

Italy is the threat to the US in the medley relay not Australia. Australia’s front half is terrible.

That was also true in a few other relays though… And we’ve beaten Italy in every one.

Interesting… Ceccon, Martinenghi and Miressi are very strong, although the latter seems to decline recently. Once they improve in butterfly, they surely can upset USA and the rest.
However, we need to do some math calculation to be precise, like we usually did for mixed 4x100m medley relay. Maybe I will do that later.

Biggest medal surprise so far is Jenna Strauch in 200m BR… promising future and kinda makes up for losing Shayna Jack who could have potentially medalled in the 100m free as well, along with Mollie if she wasnt taken out of contention.

Jenna’s semi time would have just pipped King in the final, but King would probably say she is still recovering from Covid and in full health she has gone 2.19. But great meet from Jenna in both her individual events.

Thank you, Mollie O’Callaghan, for making my day! I needed that!

Can’t wait to see what you can do at the Comm games.