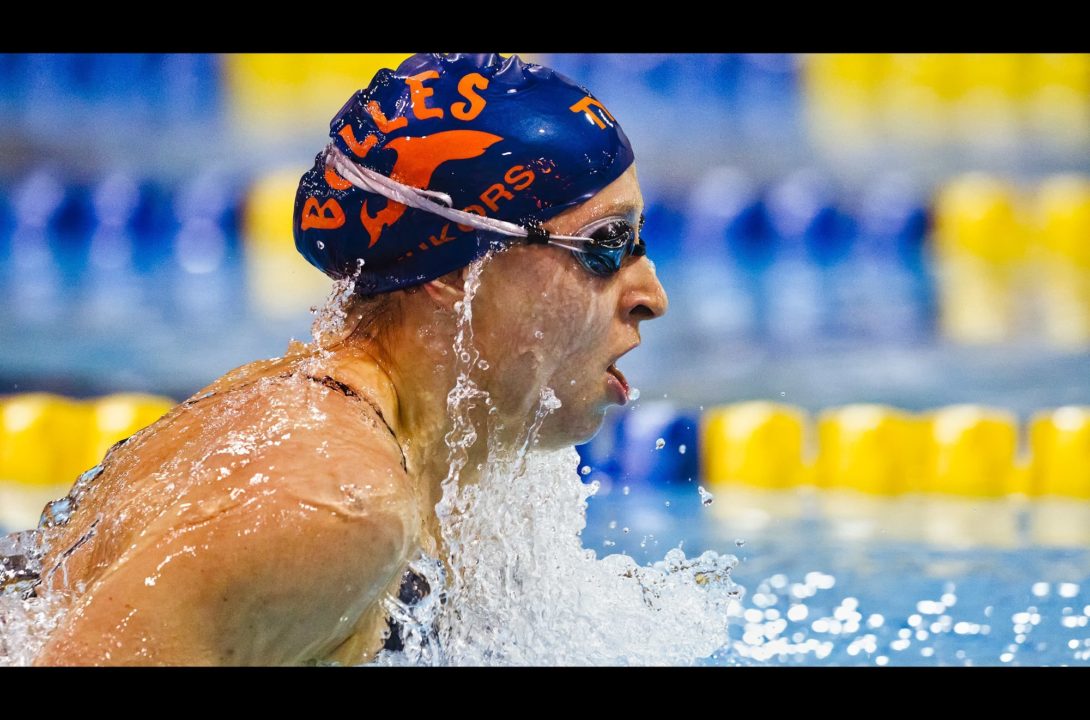 All-star swimmers Megan Moroney and Rachael Bradford-Feldman each came home with two victories last night. Moroney took the women's 200 yard freestyle in 1:50.76 followed by a win in the 100 yard fly with a 56.61... photo via Tim Binning/TheSwimPictures.com

The oldest high school invite: the Woodson Invitational’s 50th anniversary ended in a victory for the Bolles School Sharks on both the men’s and women’s side. The men obliterated their competition, finishing with a total of 392 points over second place Pine Crest who ended up with 184. Boca Raton finished third with 180 points, St. Andrews High School fourth with 163.  The host school finished second again in the women’s competition but by a closer margin. The Bolles School Sharks’ girls just barely beat the Pine Crest girls as the trumped them 266 points to 252 points. The Bolles School girls have won the state championships for 22 years in a row so this was no easy feat by the Pine Crest girls. The Westminister girls finished in a distant third with 173 points. St. Andrews High School was fifth with 136 points.

Not cracking the top three in overall points was St. Andrews School but that wasn’t because of a lack of effort. All-star swimmers Megan Moroney and Rachael Bradford-Feldman each came home with two victories last night. Moroney took the women’s 200 yard freestyle in 1:50.76 followed by a win in the 100 yard fly with a 56.61. For her efforts Moroney was awarded the Ann Marshall Award which is presented to the female swimmer of the meet.

Every year at the Woodson Invitational, the Andy Coan award is given to the meet’s top male swimmer. This year the award was split between three swimmers: Boca’s Gage Kohner, Pine Crest’s Kent Haeffner, and Bolles School’s Joseph Schooling. Kohner had the top seed going into finals in both the 50 and 100 yard freestyles. In the finals he kept his top spot finishing first in both events. In the 50 yard free he touched the wall in 21.54, the 100 yard free in 45.93. Kohner was also a member of Boca’s silver 200 yard free relay and bronze 400 yard free relay.

Last but definitely not least, national high school record holder Joseph Schooling came home with wins in both the 200 IM and 100 fly, with times of 1:50.99 and 48.50, respectively. As one of the most anticipated recruits for next year’s college season, Schooling is showing great in-season results already. Schooling’s shown interest in competing for the University of California in Berkeley under Dave Durden next year  according to TodayOnline.com but, Schooling has not made a decision yet.

So, uhhh… what did Schooling go in those events?

Times added. Didn’t know the difficulty getting results so this is me not wanting to sound like a turd.

Coach Jay Fitzgerald hosted an awesome meet that assembled some of the finest talent in the Sunshine State and we were proud to take part. One might argue that the ladies division saw the top five teams from the upcoming 1-A State Championship and the times posted for mid-September wearing tank suits, and in heavy training are certainly worth noting. The official results will not do justice to the excitement created by the final event of the evening as the 4 x 100 freestyle relay evolved into the same clash between schools that closed out the 2012 scholastic season at the state final. Once again our SAS Scots and the Bolles School Bulldogs found themselves locked into a two-team duel… Read more »