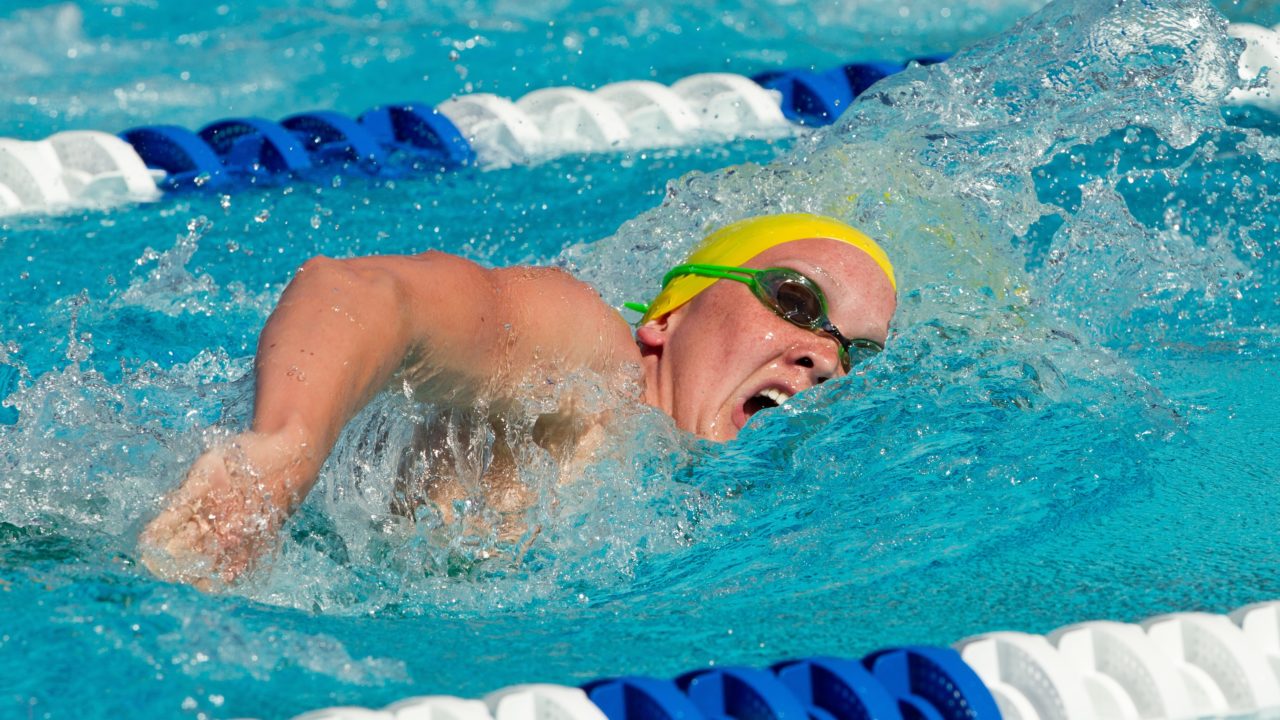 Thorpe didn't move on in the 200 free, but Kylie Palmer (pictured) gave a big thrill with a new National Record.

The greatest triumph of the prelims of day 2 at the 2012 Australian Nationals and Olympic Trials turned into the greatest disappointment of the evening session, as Ian Thorpe failed to advance any further, despite giving fans a jolt of excitement. But his was really the only low point of this meet, as there were lifetime bests, top-5 times, National Records, and barriers broken in the rest of this finals session.

When Thorpe qualified through from the prelims to the semi’s in this 200 free, which may have been his best opportunity to qualify for London (despite his claims to be a 100 man now), the buzz grew. Not sure because he made the top 16; that doesn’t take much from a global scale. But because of how he did it. He took the race out very hard, leading everyone at the halfway mark, and then had what appeared to be a break-slamming final 50 meters to coast to a 5th-seed. But it was a fragile 5th seed, as some very young competitors were nipping at his heels. That included one Thomas Fraser-Holmes, who told media after breaking the 400 IM National Record that Thorpe was old news.

Despite pulling off and trying to save some energy in the prelims, however, Thorpe was unable to match his pace in the semi’s, and ended up placing 12th overall in 1:49.91.

He still went out faster than anybody else in the field, though not quite as fast as he did in the prelim. Yet he fell apart just as hard (if not worse) on the second-half of the race.

Meanwhile, Ryan Napoleon held his ground as the top seed with a 1:47.51, while Fraser-Holmes backed up his public criticisms of Thorpe by placing 2nd in 1:47.57. Kenrick Monk, the man who became somewhat of a villain after filing a false police report in a phantom homicide attempt against his person, put himself in position to make the Olympic team with a 1:47.92. That would be huge, as he’s only been back in competing for a month after the nasty skateboarding incident that fractured his elbow.

David McKeon and Cameron McEvoy also kept themselves alive by tying for 7th, respectively. McEvoy, the 17-year old out of Southport, is everybody’s favorite sleeper pick to make these Olympic freestyle relays, will have to do better than the 1:48.35, but the gap isn’t really that great towards the top 6, either.

Thorpe now goes back on ice until Sunday morning (Saturday evening in the US), where he will begin the prelims of the 100 free.

Meanwhile, the pool at the Adelaide Swim Center was buzzing well before Thorpe took the water, as Christian Sprenger became the first swimmer in the world to break a minute this season when he won the 100 breaststroke in 59.91.

That is, in fact, the only time he’s done so outside of the polyurethane-suited 2009 World Championships, which was his big breakout meet. This was then inevitably the 2nd-best time of his career.

Brenton Rickard, who finished 2nd, also looked back to 2009 form, with a 1:00.13. It appears as though this Australian duo, who has struggled to regain their rhythm in the past few years, are really figuring things out. Look for a great battle in the 200, which is arguably both swimmers’ best race.

There was little in the way of a push for the top two, but 3rd place went to Jeremy Meyer in 1:01.82. There was quite a bit of young talent in this race, but one of them needs to be ready to go (with a long way to go) by the 2016 Rio Olympics.

Alicia Coutts played the first three rounds of this women’s 100 fly masterfully, which is a skill that will pay of big in London, and didn’t win a single round until the one that counted – the final round – that she won in 57.59. That vies her the 4th-best time in the world this year. Coutts took the swim out very well in 26.8 (she needed to, as this field of sprinters were almost all 27.2’s or better), but held onto it better than her competitors. In the opposite was Jessicah Schipper, who’d led the first two rounds. She prefers the 200, which showed up by her excellent close in this race (30.69 – best in the field) to take runner-up honors in 57.88. Those times by Coutts and Schipper rank them 4th and 5th in the world this year.

As for the rest of the field, Yolane Kukla sprinted to a 26.65 (as she is, in fact, a sprinter), but wound up 6th in 59.19. Libby Trickett was right in the thick of the pack at the turn as well, but much like we saw in Thorpe she couldn’t get home, and finished 3rd in 58.64, well back of Schipper. Trickett, also on a comeback, will have her next attempt (and probably best with 6 available spots) in the 100 free, which also kicks off on Sunday.

Brittany Elmslie, a 17-year old who keeps dropping time despite seeming like she should be maxed out, took 4th in 58.92. She could be a big factor in this Australian Team as soon as next year, as that’s a second-and-a-half drop in the three rounds of this meet alone. Watch out for her in the 100 free as well – she’s already been a 55.0, and if she has similar improvements there, she’ll be a huge upset for the Olympic squad.

Kylie Palmer became the second swimmer of this meet to break an Australian National Record (showing that this is a big bounceback year for the Dolphins) when she broke the 400 free mark with a 4:03.40. That took down the 4:04.16 of Bronte Barratt from the 2008 Olympics.

The swim is almost exactly a second drop from Palmer’s previous lifetime best, and ranks her 3rd in the world. The challenge is that her previous lifetime best was done at last year’s World’s Trials; she’ll now have to turn around and take things even a touch further in London. This was a race paced very similarly to what you’d see from Britain’s Rebecca Adlington, last year’s silver medalist and the defending Olympic Champion. She took the swim out in 2:01, and came back in 2:02. The trick is that Adlington could be down to at least a 2:00 at the Olympics, and Federica Pellegrini could come home in a 1:59.

Barratt cruised comfortably to a 2nd-place finish in 4:05.74, and despite not finishing her race all that strongly, she had enough of a gap to place three seconds ahead of the alternate Remy Fairweather. There’s no shame for Fairweather in her 4:08.63, however, as that crushes her own National Age Record. She set the previous mark at 4:10.55 in December.

Belinda Hocking broke a minute in the prelims of this 100 back, but that didn’t mean she was maxed out. She took that down to a 59.39 in the semi-finals to hold onto the top seed. That moved her to 14th-place on the all-time list, and made her the 2nd-fastest Australian. Emily Seebohm took 2nd in 1:00.06, but remember that she still leads the world this year, so even that swift time can’t feel comfortable for Hocking.

After shuffling anonymously through the prelims, National Record holder Hayden Stoeckel went from a 56 to a 53.73 to re-establish himself as the favorite in this race headed into Friday’s Finals. Ashley Delaney also stepped up in the semi to take the 2nd seed in 54.07, and then Ben Treffers, the top seed in prelims, took 3rd in 54.36. That should be a great battle for the top two spots.

These relays are something that aren’t really a huge deal for Olympic hopefuls at these Trials, but in this case we did see quite a few interesting swims, and surprising swims, as warmups for the sprinters who don’t get going until Sunday. That included 49’s, on rolling starts, from the likes of Matthew Abood, Cameron Prosser, Jayden Hadler and Eamon Sullivan. Andrew Abood, the only big-name who had to go on a leadoff leg, split only a 51.1. That’s not a huge confidence boost, but none of the above were likely swimming using too much energy.

Well, you were right: Thorpe’s prelims swim was a fragile one! I feel sad..

As for Libby, she also swam smart: too bad she came in 3rd – the worst placing ever in an Olympic Trials!!

But I think she will make the relays, at least!