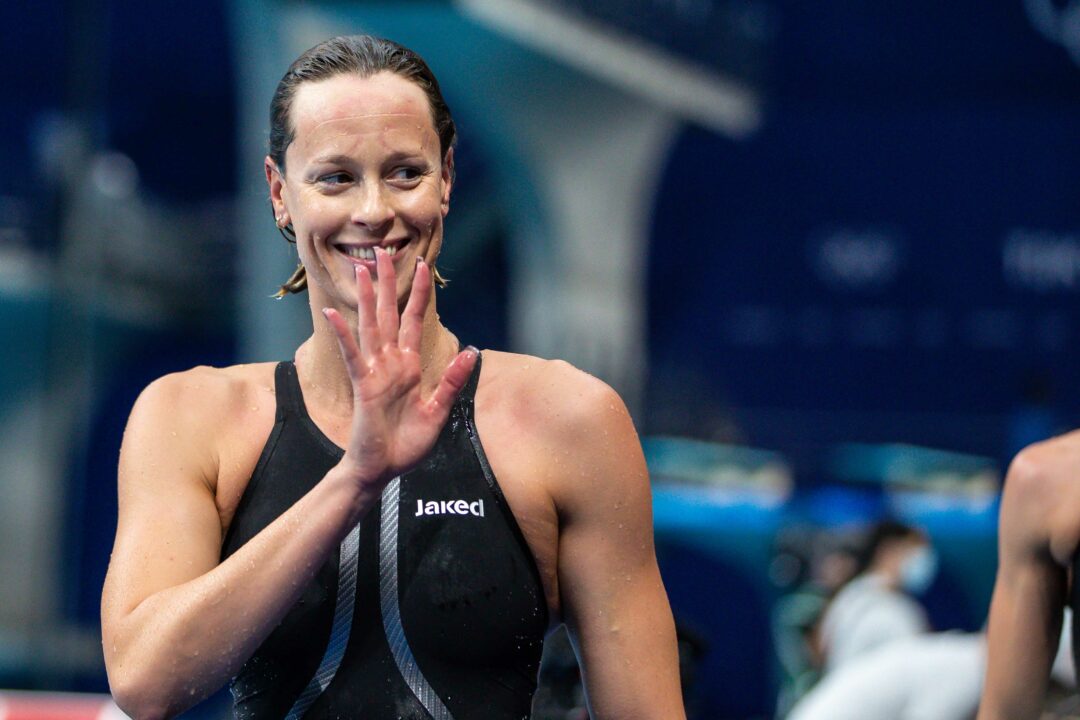 Italy's Federica Pellegrini is among the biggest mainstream sports stars swimming has to offer, and her social media following backs that up. Archive photo via Jack Spitser/Spitser Photography

Who are the most popular swimmers on social media?

The swimmers’ popularity on social media, however, doesn’t always reflect their achievements in the pool. Instagram’s Swimming Stats page has published the list of the active swimmers with the most followers in Instagram.

(Before you ask “what about Michael Phelps?”, we know he has more than 3 million followers. But he is now retired, and the list is about the active swimmers, mainly because it is very hard to track all retired swimmers. It is also hard to define a “retired swimmer”. There are many former swimmers who weren’t successful at international level who are very successful in other areas, and they have millions of followers. That’s why only active swimmers are considered on the list).

The Italian swimming fans are among the most passionate in the world, so it’s no surprise that Federica Pellegrini has so many followers: 1.5 million.

Pellegrini is also a bit of a mainstream celebrity in Italy, so much so that she’s appeared as a judge on Italy’s Got Talent.

Ryan Lochte has 845K, and this is a curious case. Exactly one year ago, he had 881K, so he lost almost 40K followers, probably because he didn’t make the U.S. Olympic team and is not under the spotlight as he used to be few years ago.

Fourth place on the list might surprise you: Argentinian Delfina Pignatiello, with more than 800K followers. She is one of the most popular sports persons in Argentina, a three-time Pan-American champion and also a Youth Olympic gold medalist. She didn’t perform well at the Tokyo Olympics, and amazingly she continues gaining followers: almost 300K since August 2020.

But no one has gained more followers over the last year than Caeleb Dressel. This is certainly no surprise, since he was the best swimmer in the 2020 ISL season and the Tokyo Olympics, winning gold medals and world records at will. A year ago he had 259K followers, and now he has 703K.

Yusra Mardini has not won medals at the Olympics or World Championships, but she is one of the most famous swimmers in the world, which is reflected by her 416K followers. She gained popularity when she competed by the Refugee Olympic Team at the 2016 Rio Olympics.

Malaysia’s Welson Sim is not a mainstream swimmer. But, in 2016, he became the first Malaysian swimmer ever to register a FINA ‘A’ Olympic cut. And today he is one of the most followed swimmers on Instagram with more than 300K followers – more than Olympic champions Nathan Adrian, Florent Manaudou, Sarah Sjostrom, Chad le Clos, and Simone Manuel.

Winning medals is good driver for popularity on social media, but it’s clearly not everything.

Lochte had over 1m followers before Rio, wonder what happened that caused him to lose so many?

I have no idea /s

I’m pretty sure those numbers were over-exaggerated, likely inflated by performance-enhancing IV transfusions of Jeah juice and drive-by spectators who enjoy a good car-crash.

I wish we could somehow break the followers down between the amount of followers that are swimmers and those that are the general public, that’d be an interesting stat

My favorite related stat is that Boomer Phelps has 570K followers alone.

As a similar case, Michael Schumacher’s (7-time world champion, arguably the GOAT in Formula 1) son Mick Schumacher raced under a pseudonym in the junior karting series (equivalent to age group swimming) to avoid the pressure/spotlight. Now Mick is in F1 himself as a rookie. Wonder if that’d be an option for Phelps’s kids as well.

Registering him as Boomer Bowman, or Boomer Lochte, will not raise a single suspicion.

If he went by Boomer Johnson it would be kinda funny

What level of swimmer does an athlete have to be to get included in this article? As soon as he gets USA Swimming registered is he good to go?

Brazilians has the most fake followers that’s for sure

Population. And swimming is a very popular sport in many East Asian countries. I believe many Chinese swimmers have way more followers on their version of Instagram.

Does that still apply to Taiwan tho?

He’s definitely one of those swimmers with natural media appeal like Lochte, when meanwhile there are a lot of other successful swimmers like Ledecky that don’t really have that

Yet she still has 500k plus followers.. I think she’s doing just fine & really coming into her own with interviews, the media, etc.