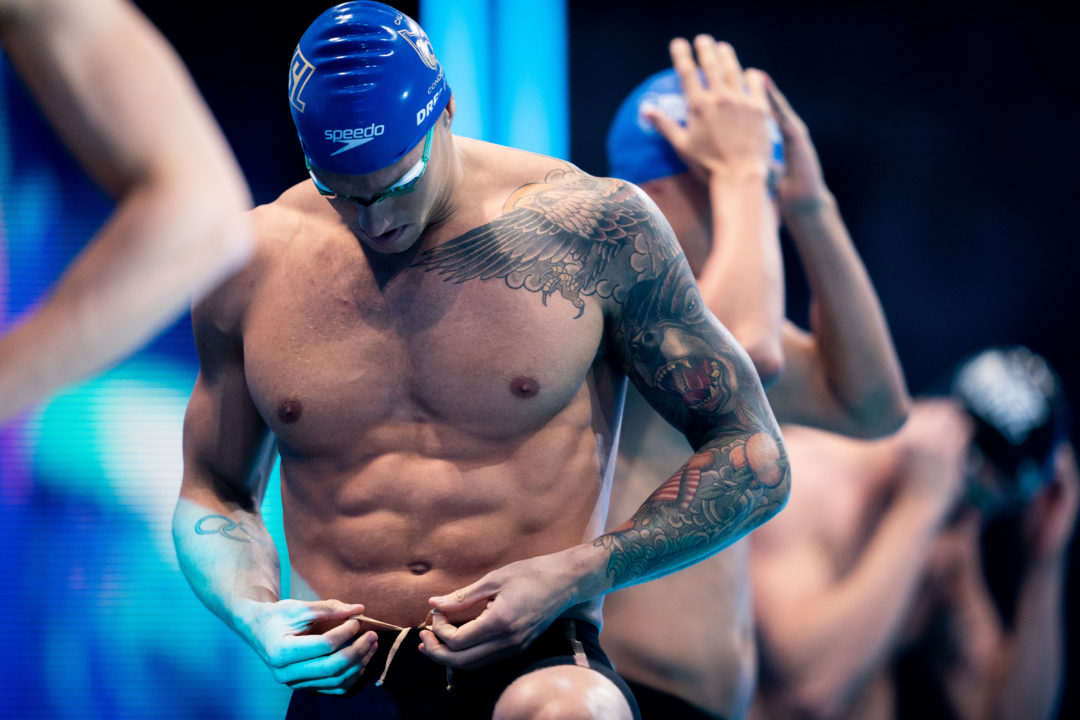 Olympic and World Champion Caeleb Dressel takes on the SPEEDO SUB-20 CHALLENGE in the 50 short course meters freestyle December 10th, 9am PST, 5pm GMT. He already owns the World Record, 20.16, dropped in the International Swimming League Grand Finale. This time Caeleb’s blazing a 50 scm free in a Speedo Fastskin 2008 LZR. This is all to celebrate 20 YEARS OF SPEEDO FASTSKIN TECH.

Speedo have led the way in swimwear innovation since the company was founded in 1914. Speedo developed the first non-wool swimsuit in 1928 as well as developing innovative constructions, such as the ‘racerback’ suit that was more figure hugging and did not obstruct a swimmer’s movements.

From early in our history, before even the butterfly stroke was invented, we’ve pushed the boundaries at the Olympics games. At the 1932 Olympics in Los Angeles, Australian swimmer Claire Dennis won gold and set an Olympic record wearing Speedo, but was almost disqualified for showing too much shoulder in her suit.

The modern Fastskin story started in 1992 at the Barcelona Olympics when Speedo started to explore how the fabrics that the suits were made from could reduce the drag created when the water flowed over it. The result was the S2000 suit, which reduced drag by up to 15% compared to traditional swimwear fabric. It also introduced water repellency and low profile, flat lock seams to reduce drag. This was followed by the Aquablade suit in at the Atlanta Olympics in 1996. In this suit not only did Speedo further develop the fabrics to reduce drag, but also the design of the suit to increase coverage on the swimmer. Some male athletes started wearing the female suit to get the extra coverage to improve performance.

In 2000 at the Sydney Olympics, Speedo launched the first Fastskin® suit, a full body suit that had fabric with built in ridges that were inspired by shark skin, designed to reduce drag. The suit also introduced muscle compressions components. 83% of all medals won at the Olympics were won wearing Fastskin® as well as 13 out of the 15 world records set. The era of the full body suit had begun.

For the Athens Olympics in 2004, Speedo created the Fastskin FSII, a full body suit designed to reduce swimmer’s drag whilst maintaining the swimmer’s range of movement using unique flexible thread and seams, carefully positioned in the direction of the water flow, reducing passive drag by an additional 4%. The suit also introduced turbulence management features on the chest and arms of the suit. Prior to this Olympics, Speedo set up the Aqualab, a dedicated R&D team working on development of competitive racing suits and who continue to develop Speedo’s suits today. It was in this development that Speedo started using computer simulation to help in the development of the racing suit.

In 2008, Speedo created the LZR Racer suit, which transformed the sport of swimming both in the short and eventually long term. The full body suit incorporated non permeable poly urethane panels to improve swimmer hydrodynamics by improving water flow and increasing body compression to reduce drag. 89% of all swim medals won at the Beijing Olympics were won by swimmers wearing the suit. In total 23 out of the 25 world records broken, were achieved by swimmers competing in the LZR suit. It was in this suit that Michael Phelps won 8 gold medals in 5 days, setting 7 world records and 1 Olympic record in the 100m Butterfly which he won by 0.01 of a second. As part of this development, as well as working with the elite swimmers, Speedo also worked with the Australian Institute of Sport and NASA.

After the Olympics, due to the amount of intellectual property protected the design and manufacture of the suit, Speedo’s competitors were unable to replicate the revolutionary design. They instead started using neoprene as an alternative material for competitive suits. When swimmers started wearing multiple suits to get the benefit of the neoprene’s buoyancy which fundamentally changed the way people were swimming, the governing body of swimming FINA stepped in.

As the world records continued to tumble, FINA changed the legislation around the body-length swimsuits and certain fabrics, effectively banning Speedo’s latest suit for being too fast. Continuing its commitment to sustainable fashion, Speedo sent its surplus of stock to London’s Chelsea College of Art and Design to aid their projects.

In 2012 for the London Olympics, Speedo once again with a new suit innovation in the Fastkin3 suit, a knitted suit that incorporated graduated compression to achieve the most hydronamic body shape to reduce swimmer drag. Speedo also created new designs for the cap and goggles as part of a ‘racing system’ launching the Super Elite goggles and Fastskin Racing Cap.

In 2016, at the Rio Olympics, Speedo designed and created the Fastskin LZR Racer X. This suit returned to a woven material that was engineered to have superior compression, but also incorporated proprioceptive features to promote improved body position and a seam structure that linked the kinetic chain of the swimmer, during the swim movements.

In 2020, for the Tokyo Olympics, Speedo have returned to nature to look at how sharks and other fish reduce drag when they swim. This has been done with leading research institutions globally, who have looked not only at the skin features of fish in existence now, but also at the ancestors of modern day sharks, that have long been extinct. Working with the Natural History Museum in London as well as with partners in other industries, including Formula 1 and transatlantic shipping paint providers, Speedo have developed the Fastskin LZR Intent suit. This suit has a unique texture that is woven into the fabric and positioned in specific areas of the suit to try and manage water flow, to stop turbulence, that causes drag. Speedo have also employed three fabrics to achieve compression in the right areas to improve fit and promote a better muscle performance whilst maintaining range of movement.

The delayed Tokyo Olympics may be only months away, but already the team at Speedo are looking ahead to Paris 2024 and how we can continue to bring new and exciting innovations to the world of competitive swimming, to ensure our athletes touch the wall first and win gold.

Speedo’s Fastskin range has been worn by some the most iconic swimmers of all time. Amongst its current stellar roster of athletes, the Fastskin Valor and Intent are worn by the likes of Caeleb Dressel, Ryan Murphy and Kathleen Baker who will all be aiming for Olympic gold in Tokyo. Speedo also supplies Fastskin suits for Paralympic swimmers too, such as world record holder Sophie Pascoe and iconic British swimmer Ellie Simmonds.

Previously, the suit was worn by all four Untied States swimmers in the 4x100m relay at the Beijing Games in 2008. The side, which included legendary swimmer Michael Phelps, overcame a French quartet in rival suits in what is widely regarded as the best ever finish to a relay event, winning by eight-hundredths of a second in one of swimming’s most famous scenes.

As well as Phelps, the suit has also been worn by modern swim greats such as Ryan Lochte, Rebecca Adlington, Missy Franklin and Katie Ledecky as well as thousands of hundreds of other athletes.