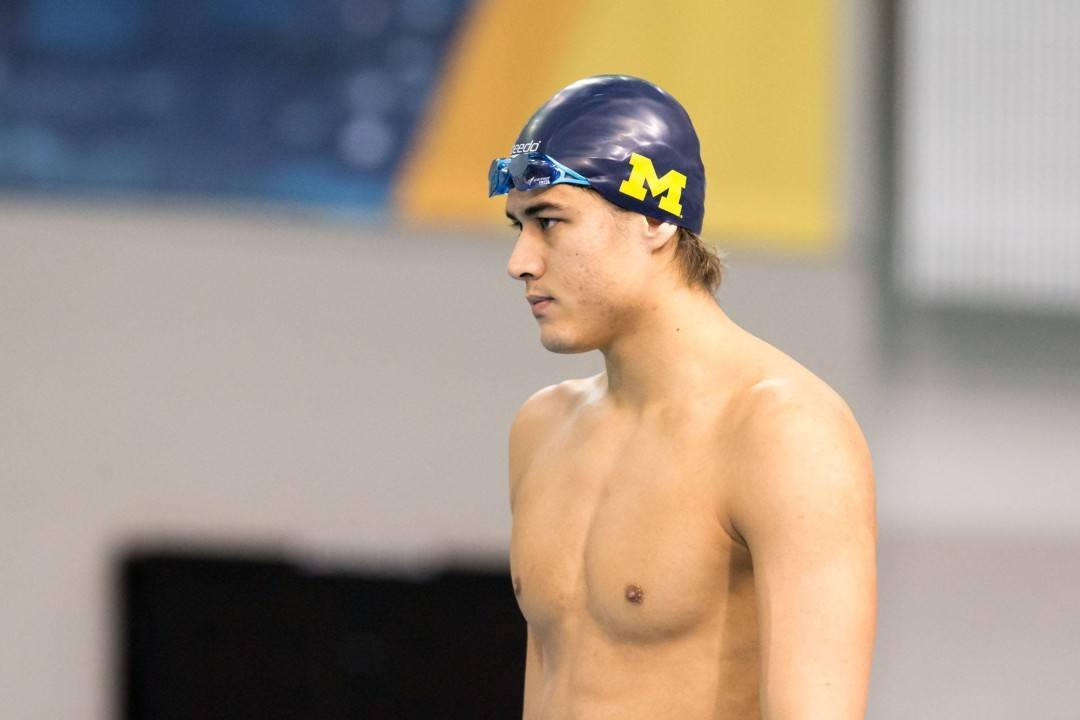 Bruno Ortiz is a critical factor in the Michigan Wolverines' success. Where does he fall on our list? Current photo via Tim Binning/TheSwimPictures.com

This is the second part of a three-part preview.  Miss part I?  Click here

Less than 18 hours until NCAA’s, so we’re jumping right back into part two of our “32 Most Valuable Swimmers at Men’s NCAA’s”.  As a reminder, here’s an explanation of our rankings:

This isn’t a ranking of “which swimmer is fastest” or how a particular swimmer is going to do, it’s just how valuable/important that individual is to their respective team next week.  There are so many key athletes, and you could make a great argument to move most of these guys up or down a few spots.  We didn’t have a hard-and-fast method in choosing, and there weren’t many extreme calculations/metrics done (though some numbers were crunched) ; we wanted to move this away from being strictly a statistical measure of “worth”.

-Estimated individual finishes/point totals.
-Relay value is critical.
-No divers.
-What happens to the team if that swimmer can’t compete?  Is the team completely at a loss without him?  Or does the team that have a reliable/fast “replacement”?  Note: I totally over-weighted this last year.  Will try to avoid that this time
-Slight weight towards the teams that are likely to finish higher in the rankings

Kalisz needs no introduction; he’s the best 400 IMer in the history of short course yards swimming, and one of the nation’s best 200 butterflyers, breaststrokers, and IMers.  A likely 50-point scorer and the closest thing to a “sure thing” in his best event that you’ll find, but it’s hard to put him higher when (a) he would be on a maximum of one relay for any team that’s going to finish in the top 10, and (b) after his 400 IM went like this, his 200 fly went like this.  I suppose we can let that one slide considering he went 3:34.

(In retrospect, I could see swapping Kalisz with Koski, given that Koski is on more relays and they’re seeded to score similar points)

D’Arrigo and Bosch are the last two names on this list that realistically may only be on one relay (though don’t be shocked if you see Bosch on the 400 medley again), and for good reason:

45-50 individual points, plus 1-2 relay swims for a contending team earns you a spot on this list.

Our first Wolfpack sighting!  Who figured the arguably the best collegiate sprint group in the country would be in Raleigh, North Carolina?  Braden Holloway and his staff have continued to do a superb job with the Wolfpack program, with NC State taking home their first ACC title in 23 years, largely behind the efforts of three incredible sprinters (Held, Williams, and Simonis Bilis).  All three are seeded in the top 10 in the 50, the top 20 in both the 100 and 200, and are members on their three excellent freestyle relays (seeded 1st, 1st, and 4th).

It might seem a bit steep to put these two all the way up here, but (1) don’t forget Williams splits 18-mid/42-low/1:33 in his sleep, (2) Held is seeded in the top 11 in all three events, and (3) NC State doesn’t really have a fallback plan with any of their relays, outside of the 400 medley backstroke and freestyle legs.

Also, consider this… here’s a list of teams that have finished in the top five since 1995:

That’s it.  The Wolfpack have a real chance at becoming the 11th member of that group (the first non-traditional-power to break the mold since Tennessee in 2001), and Williams and Held are at the center of that.  And they’re a young team; only Williams and Stephen Coetzer are seniors on the NCAA squad!  Look for them to stick around as long as the coaching staff stays in tact.

For the last 18 months or so, Fink has been both the NCAA’s and the United States’ best breaststroker, finishing second and third in the 100 and 200 breaststrokes last year at NCAA’s, and earning spots on three consecutive highest-tier U.S. international teams (2013 Worlds, 2014 Pan Pacs, 2015 Worlds).  He comes into this weekend as the top seed in both breaststrokes, and if the Kevin Cordes slump is real, Fink has the best chance at preventing Cordes from becoming the third swimmer in history to win the 100 breast four years in a row.

The pieces that set Fink apart from the other breaststrokers on this list in terms of value are (1) his ability to score in a third event, and (2) his spots on the 200 and 400 freestyle relays, where he has split under 19.5 and 43.0 in the past.  With Georgia bringing their most competitive team to the table in years (largely thanks to their improved sprinting), Fink will be on the hook to deliver.

Santo fell well below expectations as a true freshman as one of the fastest prep sprinters in history, but he’s rebounded this year in a big way.  Here’s his best times from this season, compared to his entire 2013-14 campaign:

Yeah, so that summer training with Vlad in Russia really paid off.  Condorelli was key player in their upset team victory at Pac 12’s, where he never finished lower than second place in his seven finals swims.  This weekend, he’ll be a key butterfly or freestyle leg on USC’s four sprint relays, and has also set himself to score in all three events individually on what looks to be the best team USC has had since 1990.

Side note: wow, that sophomore class has come into their own (Reed Malone, Dylan Carter, Condorelli, Michael Domagala, Stephen Stumph)

Darmody and Schooling are the second and third of the (spoiler alert) five Longhorns to make this list, with each of them expected to score at least 25-30 points individually, plus likely compete on 2-4 relays in some capacity (prelims only, finals only, or both).

Darmody was an unsung hero for the Longhorns last year, scoring 29 individual points and competing on all five Longhorn relays (including splitting a nation-leading 20.88 to lead off the 200 medley).  In his first big-time sprint freestyle relays for UT, he also served as their second-fastest sprint freestyler with splits of 18.77 and 42.70.

Schooling has wasted little time doing what he does best, serving as a go-to-guy for Eddie Reese all year, ultimately breaking 45 and 1:41 in the 100 and 200 butterfly events.  He may score more individual points than Darmody (Schooling should be a triple A-finalist), but his senior teammate gets the edge here because (somehow) there’s a non-zero chance he doesn’t end up on a single final relay.  That’s an insane (and unlikely) proposition to consider, but if Darmody and Conger are on a roll, he could be left off both medleys and the 800.  Regardless, both give Eddie Reese insane flexibility between prelims and finals relays, allowing him to pick and choose when he saves a swim or two for a particular athlete.

Ortiz may actually score the fewest individual points of these 10 swimmers, but his relay abilities and value to his team push him to the top of this list. He’s arguably the NCAA’s best in terms of elevating their game for relays (David Williams is on that list, too), as demonstrated by his 22-high 50 breaststroke, and his 18.6/41.6 freestyle legs.

Michigan’s sprint situation is significantly more rosy than last season (where Ortiz was their only true option) with the addition of Paul Powers, but the Wolverines’ trophy chances rely heavily on what gear Ortiz is able to hit.

Be on the lookout for part III first thing tomorrow morning

If you’re referring to Andrew Seliskar, you’re wrong. Seliskar’s best time is ‘only’ a 3:37.52 while Kalisz’s NCAA/American/World record is 3:34.50

“Yeah, so that summer training with Vlad in Russia really paid off.”

One has to wonder the sorts of magical training involved in Russia to have made Condorelli improved significantly.

the magic is probably in the Vodka

Again, rather surprised to not see Mullen on this list yet. Must be top 10…

Predictions for tomorrow (without looking at last year’s)
#10 Kyle Darmody Auburn (1st name to come to mind after I needed 1 more…I would have put him higher if I did the whole thing but he’s 10th here given that he hasn’t been named yet and I would think he’s on the list)
#9-8 Stubblefield, Messerschmidt Cal
#7? Murray Texas
#6 Gkolomeev Alabama
#5 Conger Texas
#4 Murphy Cal
#3 Dressel Florida
#2 Quintero USC
#1 Nolan Stanford

Need to have Bilis (NC State) in there. I think that means no Messerschimdt.

You’re right (although I got sucker punch’d by Morgan forgetting Messerschmidt on the list, see his note next to Stubblefield).