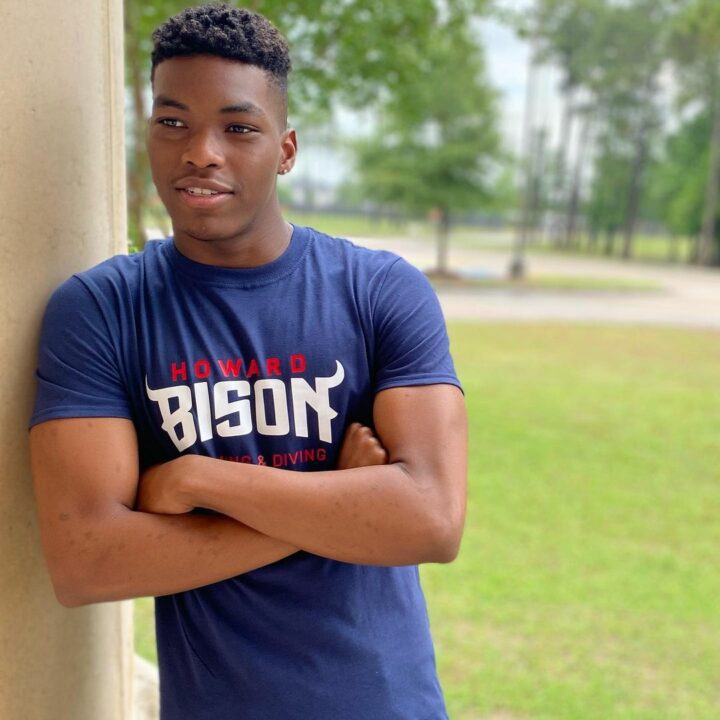 Breaststroke specialist Darin Johnson announces his decision to swim for Howard University beginning in the fall of 2021. Current photo via Darin Johnson

Darin Johnson has announced his decision to swim for HBCU Howard University beginning in the fall of 2021. Johnson is a recent graduate of Atascocita High School in Texas and he swims club at Blue Tide Aquatics.

After months of thinking, I have made my decision to swim at Howard University all four years of my college career. I want to thank my coaches and my teammates for pushing me to get to where I am now. I also want to give a big thanks to Head Coach Askew for giving me this opportunity to swim at the one and only D1 HBCU. I’m hoping to make some real noise in the water and make my name known! Go Bisons!!!!

Johnson is a two-time 2021 Texas UIL 6A Region 6 finalist. The Atascocita senior swam the 50 free and 100 breast, qualifying for the A-final in both. He finished 7th in the 50 free and was runner-up in the 100 breast. He picked up personal best times in both events, going a 21.34 in the free and a 56.81 in the breast. He went 1.3 seconds faster in finals of the 100 breast than in prelims. This time improvement bumped him from fourth to second.

He has made significant improvements in the last couple of years. As a sophomore, Johnson made it back for evening swims in both the 50 free and the 100 breast. He was 9th in the breast and 10th in the free, and his times were slower than they are now. He went a 1:01.3 in the breast and a 22.7 in the free, which at the time were personal bests for him. In two years, he has improvement his 100 breast by 4.5 seconds and his 50 free by 1.4 seconds.

Howard University recently sent its second swimmer in school history to the Olympic Trials. Sophomore Miles Simon swam the 50 free at the Wave I meet. He touched 63rd in a time. of 23.42. The only other swimmer to ever have gone to Trials for the Bisons is Head Coach Nicholas Askew. He has been a proponent of diversity in aquatic sports and has participated in webinars to speak on the topic. One such webinar can be viewed here.

The Bisons did not compete this season due to the pandemic. During the 2019-2020 season, Johnson would have been the team’s third-fastest breaststroker behind Speakman Smith and T’Lez Foulkes. Smith holds the school record with his time of 56.54. This means that as an incoming freshman, Johnson will be 0.27 seconds away from the record.

Howard University will also be welcoming Cyrus Gibson, Erald Thompson, and Brent Cooper as members of its class of 2025. That is a class heavy in sprint freestylers and breaststrokers. The sprint freestyle, especially, builds off Miles Simon‘s long course success earlier this year, when he qualified for the US Olympic Trials in the 50 free. That made him just the 2nd swimmer in program history to qualify for the U.S. Olympic Trials, following Howard head coach Nicholas Askew.