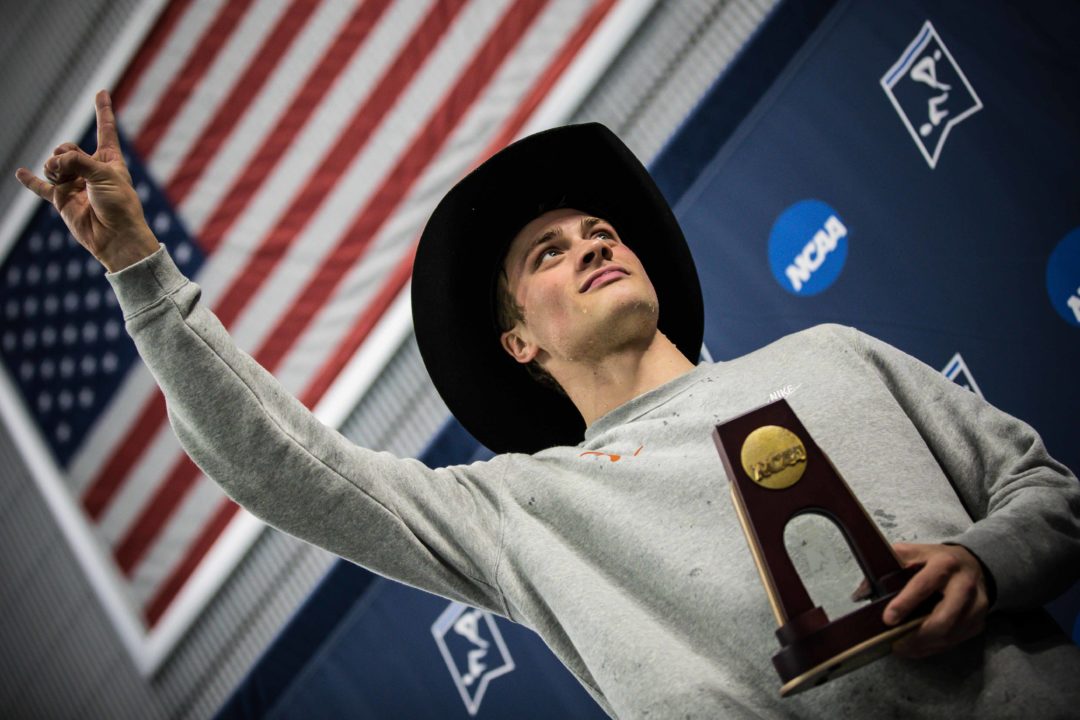 John Shebat, celebrating his win in the 200 backstroke, the first individual title of his career Current photo via Jack Spitser/Spitser Photography

In the final individual swim of his career, Texas senior John Shebat narrowed edged sophomore teammate Austin Katz in the 200 backstroke in a very entertaining 200 backstroke final, become the second and third-fastest performers in history in the process.  Shebat wasted no time off the start, rocketing to a 46.03 opening 100, under NCAA record pace of the legendary Ryan Murphy.  Katz was the only other swimmer in the field to stay within striking distance of Shebat, turning in 46.69.  After closing another two tenths over the third 50, Katz made one final push off the last wall, but ran out of room.  Shebat finished in 1:36.42, to Katz’s 1:36.45.

The duo was in a similar situation a year before: Shebat rocketing out to an early lead, only for Katz to close the gap over the final 75 yards.  Katz ended up with the upper hand last season, but tonight, Shebat had just enough to keep his fellow Longhorn at bay.  A look at the splits comparison, along with Murphy’s NCAA record:

The result got an extraordinary reaction from the Texas crowd in the stands; this is Shebat’s first NCAA title after four second place individual finishes over the course of his collegiate career.

Shebat should train for the Olympic Trials. He can be a threat in 100 back and 200 IM.

He’s only had a decent LCM 100 fly. Relies a lot on his underwaters, and apparently doesn’t translate to LCM for him.

What are you talking about? He placed 5th in the 100 back at the last Olympic Trials. Get over your hatred dude.

thank god he got his title, im so happy now 😀