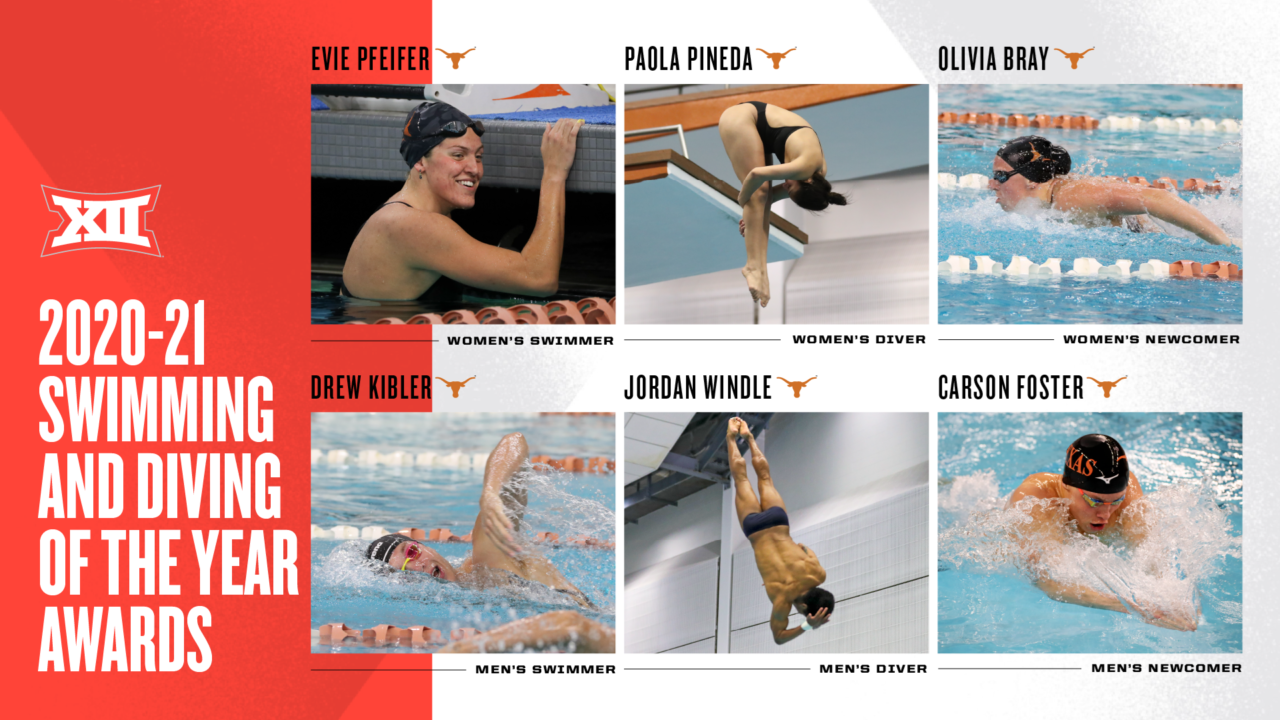 The Longhorn men swept the awards for a seventh consecutive year, while the women accomplished the feat for the fifth straight year. Current photo via Big 12 Sports

Pfeifer has decided to swim a fifth year with the Texas Longhorns, expressing her desire to race four NCAA Championship meets.

An electrical engineering major with a 3.8189 GPA, Krueger is a two-time Academic All-Big 12 team selection.

Representatives from the Texas men’s and women’s programs have swept the 2020-21 Big 12 Swimming and Diving Of the Year Awards, as voted on by the league’s head coaches.

For the Longhorn men it was their seventh consecutive sweep of the awards and 15th in program history, while the women accomplished the feat for the fifth straight year and sixth time in school history.

Evie Pfeifer was named the Big 12 Women’s Swimmer of the Year as she set two school records at the NCAA Championships while claiming four top five finishes. The senior placed second in the 1650 free with a Conference and school record time of 15:46.41. She also set the school mark in the 500 free (4:35.02) while earning another silver medal. Pfeifer placed fifth in the 400 IM and was part of the 4×200 free relay that finished fourth. She won gold medals in all four events at the Big 12 Championship.

Olivia Bray competed in six events with five top nine placings at the NCAA Championships en route to Big 12 Women’s Newcomer of the Year honors. She won Big 12 titles and set meet records in both the 100 and 200 butterfly while finishing second in the 200 and seventh in the 100 at the NCAA finals. She also swam on the 4×100 medley relay that earned a bronze medal at the national championships. The rookie was also the Big 12 Women’s Newcomer of the Meet at the Big 12 Championship.

Drew Kibler was voted the Big 12 Men’s Swimmer of the Year. He won a national championship as a member of UT’s 800-free relay and won silver medals in the 100 free and 200 free. The junior placed fifth in the 500 free and was on the 400 free relay that finished fourth. Kibler captured five All-America honors in three individual events and two relays.

Jordan Windle set the Big 12 record for most Diver of the Year honors as the senior secured his fourth award. He captured the NCAA individual title on the 1-meter board, finished runner-up on the 3-meter and placed fourth on platform at the NCAA Championship. Windle was named All-America in all three events and also collected the College Swimming and Diving Coaches Association of America (CSCAA) Men’s Diver of the Year and the Big 12 Championship Men’s Diver of the Meet.

Carson Foster garnered Men’s Newcomer of the Year. He was joined Kibler on the Longhorns’ NCAA champion 800-free relay and captured the silver in the 400 IM. The freshman placed fourth in the 200 IM and was sixth in the 200 back. He was named All-America in all four events and was also the Men’s Newcomer of the Meet at the Big 12 Championship after winning four gold medals.

For the 19th time in his career, Eddie Reese has been named the Men’s Swimming Coach of the Year. The 43-year head coach has won 42 consecutive conference titles and led his team to an NCAA-best 15th national championship in 2021. He was also honored as the Men’s Swimming Coach of the Year by the CSCAA. Reese announced his retirement at the conclusion of this season, which will take effect after this summer’s Olympics.