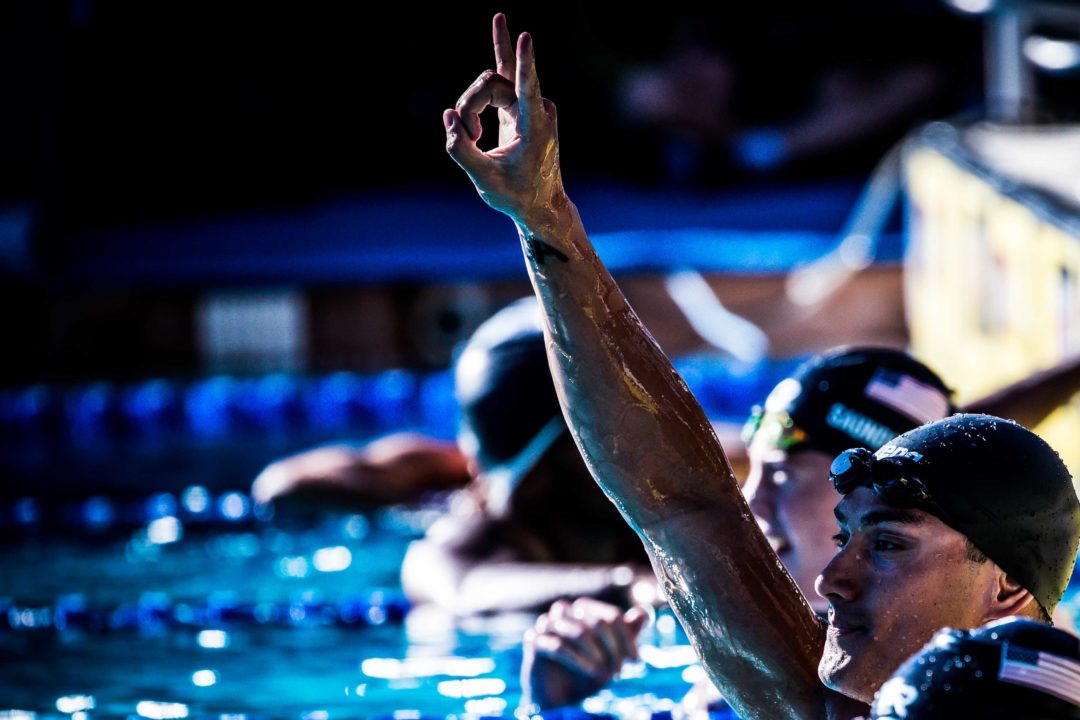 In a letter titled "A Voice for Senior Athletes," the duo asked NCAA president Mark Emmert to consider giving an additional year of eligibility to seniors. Archive photo via Jack Spitser/Spitser Photography

University of Texas senior swimmers Maxime Rooney and Jack Collins have asked NCAA president Mark Emmert to consider giving an additional year of eligibility to senior athletes affected by the cancelation of national championships as a result of the COVID-19 pandemic.

In a letter titled “A Voice for Senior Athletes” published to Instagram Tuesday, the duo thanked Emmert for taking action to protect student-athletes’ health, but acknowledged the “abrupt end to athletic careers” the decision caused.

View the letter in full below.

Rooney and Collins both transferred to Texas. The former swam the first three years of his collegiate career at the University of Florida and did not have to redshirt before his senior season with the Longhorns, while the latter swam two years at Indiana, then redshirted a year before swimming two seasons at Texas.

Last Saturday, Rooney published a blog post discussing his immediate reaction to the news the championship meet could be canceled and his takeaways from the season. View that in full here.

The NCAA has already granted an additional year of eligibility to athletes who compete in spring sports in Division I and III. As of last week, the organization was reportedly “unlikely” to do the same for winter sport athletes.

Did you guys happen to get my comment on a 2021 NCAAs special invite to 2020 seniors? Not sure if it was deleted but it took a super long time to write 😂

The season was not a total bust. The horns had a winning dual meet record and they won big 12s.

I return to my suggestion of a September Championship Meet. No eligibility required. Trials and Olympics postponement only makes this even more viable. Those invited to NCAAs are eligible for this meet. Decision about whether alternates would be invited if (as I suspect) some Seniors and others may elect not to participate. This would be the equivalent of the Tennis Indoor Championship which isn’t an official NCAA Championship, but is certainly a prestigious event. Nothing about this would require scholarship alterations, roster allotment/readjustment, or even student/athletes having to return to school (which most probably have completed). It is fair to ALL NCAA-bound athletes, not just Seniors, and the Seniors can move on with their post-graduation plans – whether that be… Read more »

To build off of Braden’s one comment below:
It is unfortunate that seniors at all three divisions were not able to compete at NCAAs (heck, D2 was stopped in the middle of the meet), however, adding a year back to select few seniors has more ramifications than just them competing at NCAAs.
1. They would be allowed to compete in all dual meets and conference championships. This would be unfair to teams who did not have seniors qualify and get reinstated, thus increasing the disparity between programs.
2. How are D1and D2 programs going to provide scholarship money to them and the rest of their roster, including incoming freshmen? How are D3 athletes going to pay for… Read more »

THIS IS ALREADY HAPPENING WITH SPRING SPORTS. It is being worked through. It CAN be done. While it does apply to all spring athletes since they did not play at all, they still have SENIORS. These are already being worked through. In fact, it would be easier for winter because there are fewer athletes if it is only seniors. What people are missing is that with spring sports they are ALL getting another year so these same issues will come up each year (although with knowing ahead about it in recruiting you can balance a bit more). But if a 19/20 sophomore spring athlete wants another year after their “senior” year, they can have it. So for example your comment… Read more »

The main difference between spring sports and winter, is that spring sports were uniformly affected across the board regardless of postseason eligibility. Regarding swimming, I coach in a conference with nine teams, of which three teams had individuals qualify for nationals. Why should those teams be allowed to have those seniors return (to score points in dual meets and conference championships) while the other teams do not?

Life makes no promises. It comes with no guarantees. You can lose your life tomorrow… as many of these people who are sick and dying are going through. Would be nice if they could petition for an extra year of eligibility. This letter is just another face of entitlement.
Be grateful for you health, for your family, for the remarkable career you have had.

ALL of us are being affected by life’s circumstances in this. Whether we have lost a loved one, lost a job, lost a swim meet.

No. You don’t get to play an entire season, miss one game/meet and get another whole season. Missing a few days of competition due to a pandemic doesn’t grant them the right to swim for another entire season, one that included a conference championship for many of them. A basketball team shouldn’t get another entire season just because their run in the tournament got cut short. Life happens, move on, don’t try to work this system. Period.

If you add up all the hours that the swimmers missed by missing their NCAA’s you would find out that they were probably only done with about 50% of their season. For example dual meets are about 2 hours, and conferences 4 or 5 days and should hold more weight than simple dual meets. Say a team had 8-10 regular meets and one mid-season invite. You’re at a little more than 50-60% off their schedules competition time. Probably doesn’t make a difference but…

I’m thinking if the NCAA were to consider this, they would have to do it for all winter sports. I know the elite hockey teams were crushed they couldn’t compete in their league and NCAA tournament. Then what about Spring sports that were canceled? From NCAA perspective this would be very hard to give hundreds of athletes another year eligibility – – and I’m not sure all Athletic directors would want this given athletic scholarship funding.

It was already done for all spring sports