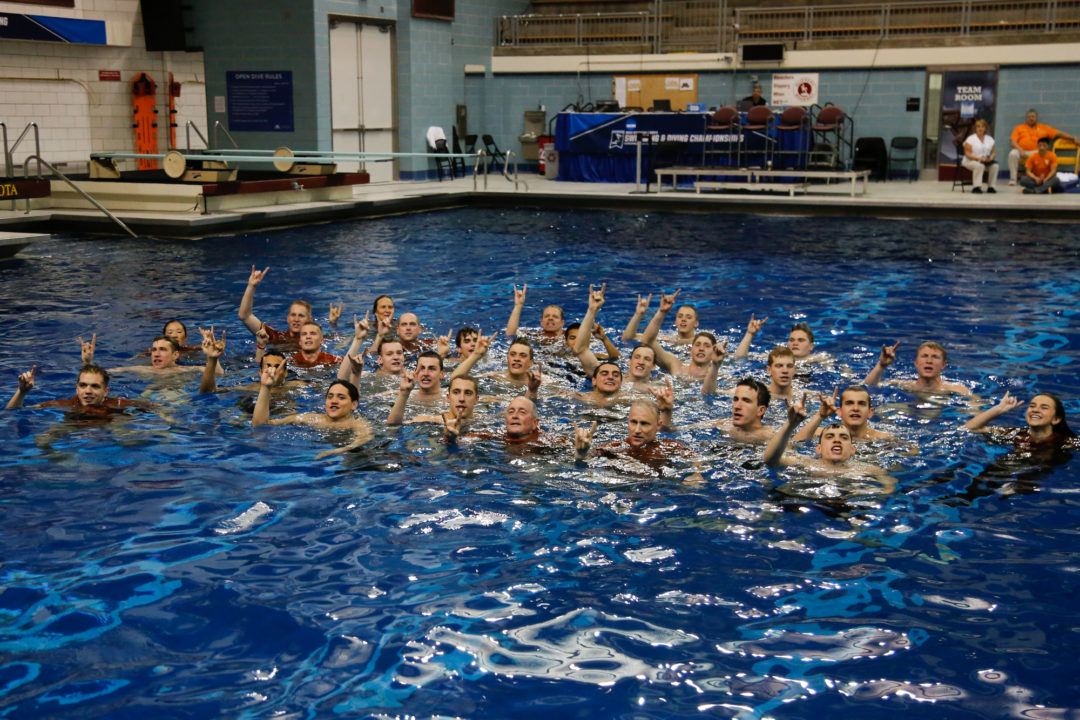 The Texas Longhorns don’t swim their first meet, the Orange & White intrasquad, until next Friday; and their first intercollegiate race isn’t until their annual Indiana/Florida tri-meet on October 19th and 20th.

But, they decided not to wait to unveil their latest NCAA Championship banner in the Lee & Joe Jamail Texas Swim Center after practice on Friday afternoon.

The team gathered on a bulkhead to sing the school’s fight song, “The Eyes of Texas,” and at its conclusion, as the facility erupted in cheers, the banner slowly dropped from the ceiling to hang alongside its 13 other banners (including those from the 2015, 2016, and 2017 seasons as well).

For 5 Texas seniors, this unveiling commemorated the completion of a perfect 4-for-4 in NCAA team championships in their careers:

Note: a 6th senior on the team, Big 12 All-Academic first teamer Thomas Colket, swam at SMU as a freshman and sophomore before joining Texas for the last 2 team titles.

The celebration was part of a whirlwind week for the Longhorns, which included receiving their national championship ring and recognition on the field during the Texas football team’s nationally-televised win over USC.

2018 Natty Champs getting some screen time at DKR. pic.twitter.com/627Haa84no

Just curious: would they have still have won without their divers, specifically Jordan Windle?

You could say “would they have still won without Joseph Schooling” or “would California have still taken second without Seliskar”. What I am trying to say is no team wins based on the efforts of just one individual.

I get yours and balding eagles point and btw I never said I didn’t like it, I merely asked about it because yes while it’s certainly true that no team wins based on an individual it’s also true that if Cal didn’t have Saliskar chances are they would have someone else almost as good because USA swimming has incredible depth but if Texas didn’t have Windle chances are they wouldn’t have anyone else capable of scoring because there is simply a more limited ‘pool’ of elite divers in the US.

Pretty sure OP might be a diver on caliber with Windle…

Again, for maybe the 100th time: the name of the NCAA sport is “Swimming and Diving.” Coaches know that, and if their staff don’t recruit divers, it’s the same as if they don’t recruit swimmers who swim the 200 fly. There’s no option for a staff to say “we’re the best team at the meet if the 200 br and fly aren’t in the program: we were winning after the 100 free.” Too bad.

Definitely not. Good thing they got him! Talk about clutch team player!

And as much press as the swimmers always get I think it’s really cool that the divers were the starring role in this meet as being the deciding factor. It’s like having your kicker make that winning field goal there’s just something special about it.

Hang this one next to the diving well.