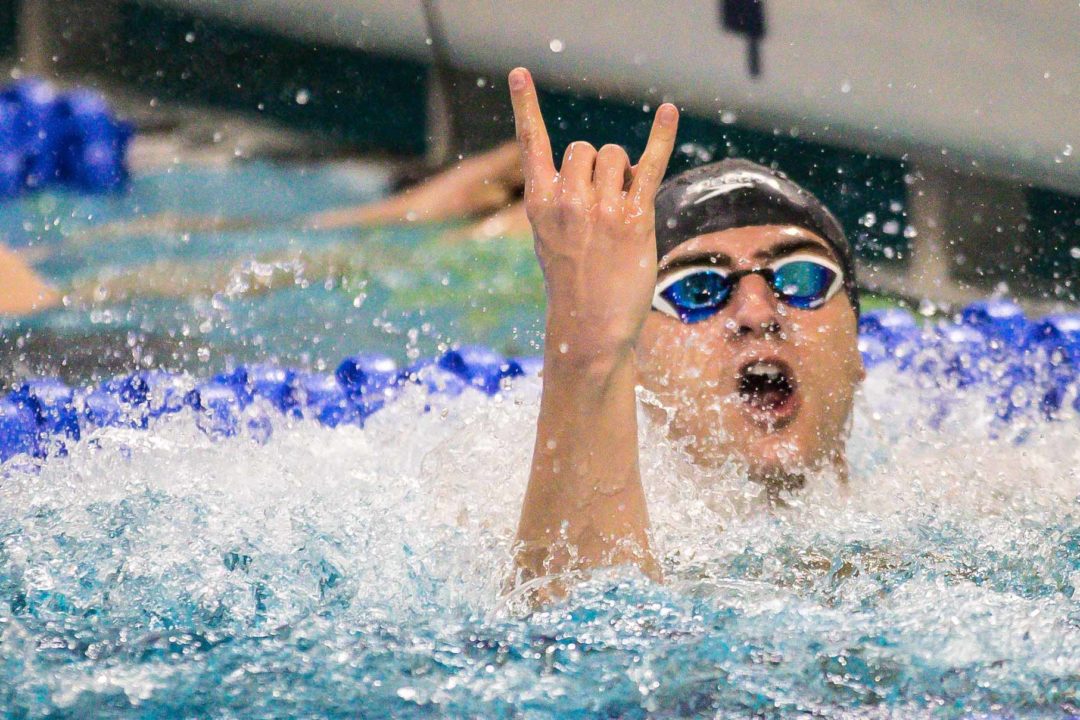 Jiang and Staka returned to battle in the 100 back. Jiang was only 5 hundredths shy of his best time, putting up a speedy 45.31 as he edged out Staka on the back half. Staka was within tenths of his best, taking 2nd in 45.67. Relay teammates Corbeau and Larson also won a race each in the first half of the meet. Corbeau won the 100 breast in 53.66, while Larson took the 50 free in 20.23.

A 1-2-3 finish for Alvin Jiang, Maxime Rooney and Drew Kibler. Jiang led the way with a pool record time of 46.14 pic.twitter.com/JJAmcADPLt

DALLAS, Texas – The No. 1 Texas men’s swimming and diving program finished the 2019-20 regular season undefeated on the season after a 194-101 win at SMU on Friday evening.

Texas’ meet was highlighted by 11 pool records at the Robson & Lindley Aquatics Center.

The Longhorns will be back in action Feb. 26-29 at the 2020 Big 12 Championships hosted by West Virginia.

DALLAS (SMU) – The SMU men’s swimming and diving team fell to No. 1 Texas, 194-101, on Friday evening at the Robson & Lindley Aquatics Center and Barr-McMillion Natatorium.

The Mustangs continue to excel in breaststroke action, sweeping the 200-yard event with Caleb Rhodenbaugh (1:57.92), Colin Feehery (1:58.09) and Connor Dalbo (1:59.24) finishing in order. Both Rhodenbaugh and Feehery’s times met the NCAA B standard, a first for Feehery in the event this season.

In diving action, Parker Hardigree led the Mustangs with a third place finish on 1 meter, registering a six-round 329.63. Action on 3 meter was highlighted by Dominic Hoefer’s first-career NCAA Zone score. The freshman posted a 327.30 in the event, making him the third Mustang, along with Hardigree and Peter Smithson, to qualify for the NCAA postseason.

In the opening 200-yard medley relay, Riley Hill, Rhodenbaugh, Koo and Forndal finished second, covering the distance in 1:28.20. Forndal, Justin Baker, Kaye and Koo closed the night clocking in at 1:21.35 for third in the 200-yard freestyle relay.

Prior to the event, the Mustangs honored six seniors for their contributions to the program – Reid Anderson, Duncan Brookover, Nathan Ciatti, Koo, Matan Segal and Arthur Yuen.

SMU is back in action for the American Athletic Conference Championships February 19-22 in Houston. Tickets are on sale now.

Shoutout my man Cole Fleming tho

Another meet without Chris Yeager?

So much depth. It will be a great NCAAs, with multiple Longhorns on the bubble in most events. All their transfers might swing the meet.

I can’t imagine going 45 in the 100 back, and wondering if that puts me 4th or 5th on the depth chart

Rooney, Jiang, Staka have been on point all year. Rooney obviously was already a big star. But Jiang and Staka have clearly benefited by their time at Texas. Jiang is like a new swimmer

Texas could have 4 dudes in A final of 100 back

It’s so radical seeing Texas suiting up and swimming fast in season. I am anxiously waiting to see the traditional huge time drops at NCAAs.

Isn’t the SMU pool a year or two old? Lots of pool records set by a top three NCAA team not too surprising.

Eddie sure is resting them more this year. Much better in-season times than in the past. Guess Townley’s near-death experience in the 500 free and being ruined for the rest of the meet at last year’s NCAAs convinced him to back off some this year.

You missed his 200 free apparently.

he was a little off, still got 4th place. again, not sure that he was “ruined”.

Question for you: A fresh, not ruined Haas would have split what on the relay? :38?

Yes, i actually think that is an apt description of what happened.

And he still hasn’t recovered.

1:45.9 LCM at Winter Nationals this past December isn’t recovered?

One kamikaze swim by a speedy mid-distance swimmer in his final 500 free of his career (who’s also now a post-grad) does not have any effect on Eddie’s preparations. Yes, the team- and Townley- is swimming notably faster in-season, but your guess is a bit of a stretch.

I believe it was one Eddie Reese who said he didn’t rest them enough.

Eddie has certainly changed his training philosophy. Gone are the days of Texas getting crushed in dual meets, getting swept out of several events and getting the mercy rule handed to them.

I was going to say the same. If Kibler is nearly 1:33 flat in a dual against SMU in a brief, he should go 1:29 almost no problem rested.

Eddie himself has repeatedly stated that the tech suits are worth roughly half a second/50 when tapered.

Everyone wore a tech suit except Rooney.

It appeared that all the men (not some) from both teams suited up, with the exception of Rooney in the 100 fly.

I watched online and it looked everyone (not sure about Rooney) were wearing suits from both teams. Not the women though