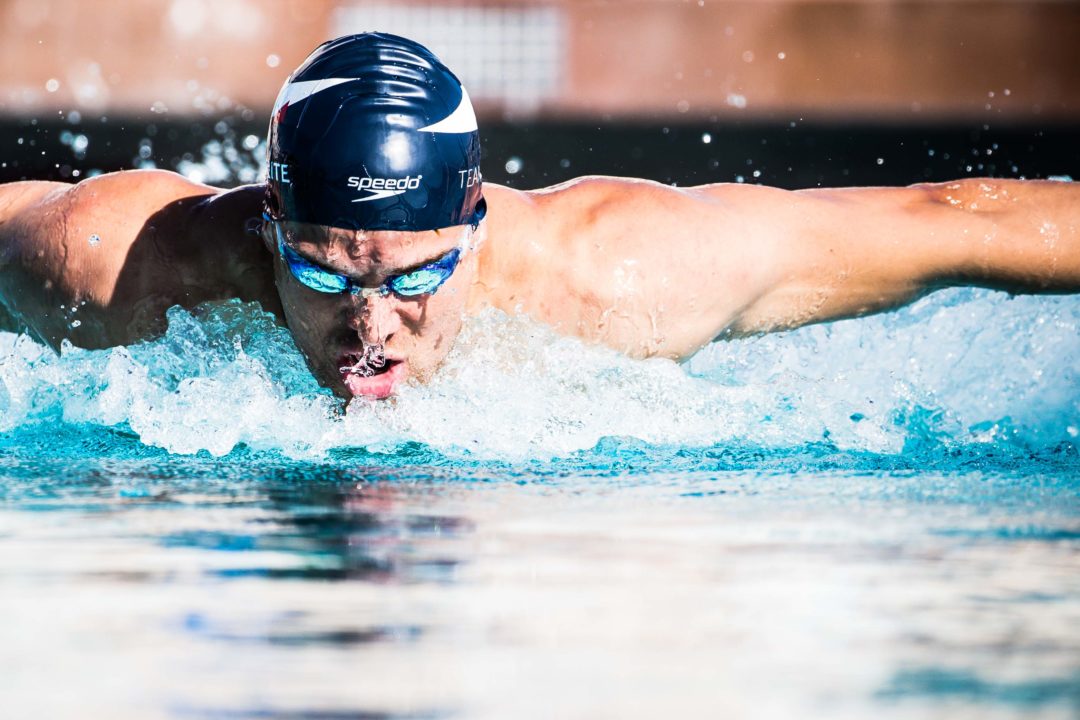 Michael Petrides battled closely with teammate Colby Mefford in the 200 free. Petrides was out quicker at the 100, but Mefford took over on the 3rd 50. Petrides was able to take his lead back on the closing split, winning 1:38.44 to 1:38.90. Petrides went on to win the 100 free in what would have been a Pool Record time of 44.85. However, Team Elite’s Artyom Machekin broke that with a 43.41 in exhibition, dropping half a second from his best.

Christopher Jhong also picked up a couple of Cal wins swimming under the former Pool Record with his 1:48.14 in his 200 IM victory and winning the 200 breast in 2:02.10. That Pool Record didn’t last, however, as postgrad Tommy Wang exhibitioned with a 1:47.98.

There were some postgrads competing in exhibition at this meet. Cal’s Tom Shields posted a 1:38.80 Pool Record in the 200 fly, setting a lifetime best for the first time since 2013 and becoming the 4th fastest man in history. Team Elite’s Ali Deloof smashed the Pool Record in the 100 back (53.55). Teammate Linnea Mack‘s 22.57 in the 50 free and 48.83 in the 100 free were both good for Pool Records.

Half of Cal’s squad cruised past USC, 161-130, in Los Angeles before the other half handled its own business in a 166-90 win over the Tritons in San Diego. Cal improved to 5-0 in the dual meet format this season and has won 11 consecutive dual meets dating back to Oct. 3, 2018.

NEXT TIME
Cal will round out its two-day trip to SoCal with a non-scoring long course competition against UC San Diego at noon on Saturday, Feb. 8. The meet will be held at Southwestern College in Chula Vista.

LA JOLLA, Calif. – The University of California, San Diego men’s swimming team wrapped up its first day of competition against California at Canyonview Aquatic Center. Their score against Cal

The competition featured swimmers from Team Elite, post graduate California swimmers and some of the top swimmers in the sport including Jacob Pebley, Tom Shield and Gabby Deluth.

The Tritons started the meet with bang and won the 200-yard Medley Relay with a ppol record time of 1:29.05. Tyler James, Edgar Chin, Lance Freiman and Spencer Daily made up the relay team.

Spencer Daily’s performance was the highlight of the day. He won the first event of the day in the 50-yard freestyle with a time of 20.34. Later he would pick up a win in the 100-yard butterfly with a time of 48.65.

The Tritons resume competition and will race long course February 8 at Southwestern College at noon.

About UC San Diego Athletics
With 30 national team championships, nearly 150 individual titles and the top student-athlete graduation rate among Division II institutions in the United States, the UC San Diego intercollegiate athletics program annually ranks as one of the most successful in the country.  The Tritons sponsor 23 intercollegiate sport programs that compete on the NCAA Division I and II levels and, in summer 2020, will transition into full Division I status as a member of the Big West Conference.  UC San Diego student-athletes exemplify the academic ideals of one of the world’s preeminent institutions, graduating at an average rate of 91 percent.  A total of 82 Tritons have earned Academic All-America honors, while 37 have earned prestigious NCAA Post Graduate Scholarships.  In competition, more than 1,300 UC San Diego student-athletes have earned All-America honors.

Is Gkolomeev training with team elite?

Hope not for his sake.

Not only did Shields move from number 9 to number 4 on the all time list, he moved into #2 American, behind only Conger.

All depends on Luca’s shoulder as well, 200 fly is a brutal event to take on if you’ve been in restricted training for 2-3 months, particularly as he hasn’t been able to build the kind of aerobic base that a 25 year old pro has.

Ah yes. The legendary “aerobic base.” After a point, “aerobic base” doesn’t contribute to anything. There are no further gains in capillary or mitochondrial density without more significant stimuli (like HIIT), the heart doesn’t remodel and hypertrophy more (it just runs into problems like SVT, which we’ve seen in Pernille, King Kyle, Clark Smith) than it already has, and lung volumes don’t further change. I’m sure Luca has plenty “aerobic base” to last him a lifetime. If total years of aerobic base training contributed significantly to 200 fly speed, there’s a thousand of us old farts you used to do 15,000 meters a day (and that took a long time since we were so slow) 6 days a week who… Read more »

Shields was very impressive, but there was also a super impressive 100 fly from Marius Kusch in 44.8!

Lol looks like the headline changed after I commented

It did 🙂 I saw the exhibition events and reported on those originally, but I hadn’t seen the pro swimmers who were listed as exhibition in the regular events. Thanks!

Pro swimmers aren’t allowed in “regular events”. I’m assuming they swam during the breaks, and the results somehow combined them?

Yeah. Seems to be the case. They were just listed under the regular events.