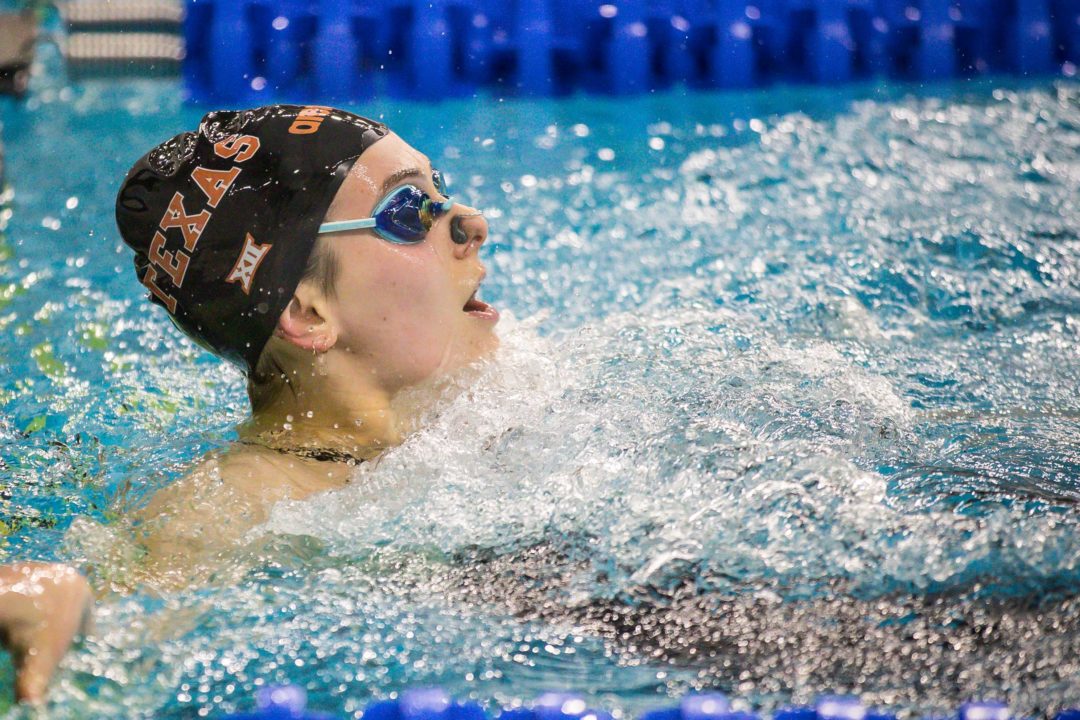 Texas took a short road trip to SMU tonight for a dual meet against in-state rival SMU. The Texas women won with a final score of 159 to 132. For a recap of the men’s meet, click here.

Emily Reese posted a Texas win in the 100 free after the break with a 51.64. The backstrokes were swept by Texas freshmen as Miranda Heckman claimed the 200 back (2:01.92). Just as the Longhorns were building a win streak again, Julia Yakushi was the next to win for SMU, coming from behind to win the 200 breast in 2:21.75. Trahan completed the butterfly sweep, winning the 100 fly in 54.16. Gabi Grobler ended the individual slate with a win for the Mustangs, posting a 2:04.08 in the 200 IM.

Texas’ meet was highlighted by a pool record by senior diver Alison Gibson in the 3m diving competition.

The Longhorns will be back in action Feb. 26-29 at the 2020 Big 12 Championships hosted by West Virginia.

DALLAS (SMU) – Three Mustangs picked up wins as the SMU women’s swimming and diving team fell, 159-132, to No. 10 Texas on Friday night at the Robson & Lindley Aquatics Center and Barr-McMillion Natatorium.

Erin Trahan swept butterfly events, while Gabi Grobler won the 200-yard individual medley and Julia Yakushi picked up her first collegiate win in the 200-yard breaststroke to lead the Mustangs.

In relay action, Stevens, Trahan, Anderson and Smith closed the event with a second place finish in the 200-yard freestyle relay (1:34.51).

Nicole Stambo led the Mustang divers at the event, placing fourth on both boards. Her 301.50 on 3 meter was a personal best.

Prior to the event, the Mustangs honored three seniors for their contributions to the program – Anderson, Lindsey Blanchard and Trahan.

SMU is back in action for the American Athletic Conference Championships February 19-22 in Houston. Tickets are on sale now.