Texas Hall of Fame Invite: Gaucho and Giles Break Out in Day 1 Prelims 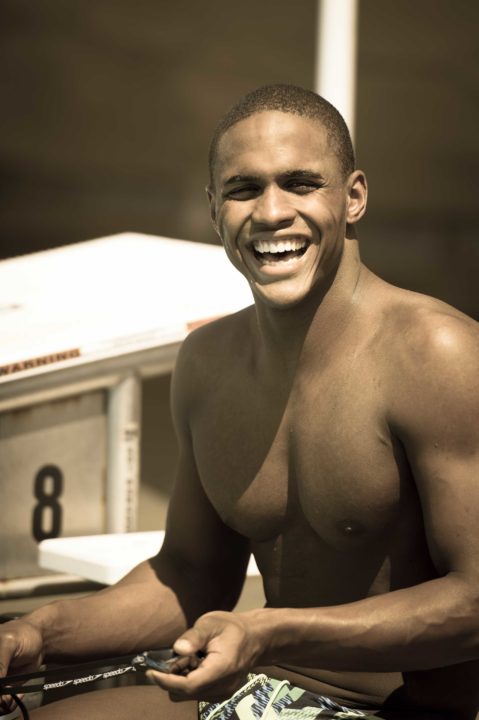 Day 1’s preliminary session at the 2013 Texas Hall of Fame Invitational, probably the best predominantly-college invite on this semester’s lineup, featured a bit of a tinkered event lineup. The morning prelims included the 100 fly, the 500 free, the 200 IM, and the 50 free. All relays were saved for finals sessions. The 32 swimmers (in four heats of eight) advance to finals.

Immediately, there was a big attention-getting swim in the very first race of the meet. UCSB’s Andrea Ward, seeded at a 54.09, swam a 51.76 to take the top seed in the women’s 100 fly. That crushes her old school record of 52.98 set in 2012; Ward is one of the two best swimmers in program history, holding a total of 5 out of the program’s 14 individual swimming records.

While this women’s 100 fly field is not the best event we’ll see at this meet, the race did include last year’s NCAA 9th-place finisher Kendyl Stewart from USC, who was a 52.00 for the 2nd seed, and near-miss All-American Mackenzie Powers from Penn State, who was a 52.06 for the 3rd seed.

Things didn’t settle down much after that, either. In prelims of the men’s 100 fly, that famous Arizona mid-season taper reared its head, and senior Giles Smith took the top seed in the men’s 100 fly in 44.75. That’s his best time by nearly a second, though he remains second on the Wildcats’ all-time list behind Albert Subirats.

That time would’ve placed him behind only the now-graduated Tom Shields at NCAA’s last season, in a race where Smith was 6th. Since graduating high school, doing a year at Tennessee, and transferring to Arizona, there have been a lot of people who have had high expectations for Smith. He has been very good, and won a ton of All-American awards, but this singular swim is the one we’ve been waiting for. This might be the swim that launches him into a huge senior NCAA Championship and a successful pro career after that.

In 2nd place was an almost-as-exciting 45.65 from Texas freshman Jack Conger, followed by his teammate, sophomore transfer Matt Ellis, in 46.69. The Longhorns’ other standout freshman Clark Smith, was only a 49.44 – shy of his season-best time.

Things got into more of a groove after that raucous start, with USC looking very strong. Chelsea Chenault was a 4:39.96 for the top seed in the women’s 500 free, ahead of Arizona’s Bonnie Brandon in 4:41.30.

In the men’s 500 free, Texas post-grad Michael McBroom was a 4:17.05 to take the center lane for finals. On either side of him, though, will be two of the best college swimmers in this event: Longhorn Clay Youngquist (4:17.62) and USC’s Cristian Quintero (4:17.90). Nicholas Caldwell continues to look revitalized in his career after a transfer to Wisconsin, and is the 4th seed in 4:18.10, followed by Reed Malone of USC in 4:18.12.

The women’s 50 free might be the best race of this meet, and Arizona’s Margo Geer, the defending NCAA Champion, took the top seed in 21.92, followed by Wisconsin’s Ivy Martin in 22.10 and USC’s Kasey Carlson in 22.19. In 4th behind them was Sarah Bateman, who is a former Florida Gator and Icelandic Olympian, in 22.21. Bateman is attending graduate school at Texas, and after some time away, has returned to training it seems in her first big meet since the Olympics (she did swim at the Collegiate Club Nationals last year).

And finally, in the men’s 50 free, the top seed went to the unattached Brad Tandy in 19.51. Tandy’s status for this season has still not been confirmed as eligible or ineligible by their media relations staff, but at least for this meet he won’t be able to swim in Arizona’s relays or have his times count for NCAA qualifying.

Texas’ Caleb Weir is the 2nd seed in 19.67, followed by his teammate Matt Ellis in 19.79. Jimmy Feigen was 4th in just 19.81, but he swam this race with his goggles as a mustache, so he’d still be the favorite in finals.

Does anyone know where Austin Vacek is? Eddie Reese said in a SwimSwam interview that this kid would make him famous.

>The Longhorns did not use Clark Smith in this race…

Conger is tall and skinny. Phelps is tall and (was) relatively skinny. Just a couple examples.

Conger is not skinny and I have seen them both. Clark is 2-3 inch taller.

Yes, that’s true. Smith is taller than Conger. However, they are both “tall.”

And yes, Conger is skinny. The most recent listing I can find (though I know the internet isn’t always right) puts him at 175lbs. 6’4″, 175 is skinny.

Clark is almost 5 inches taller than Conger at 6’9″ and Conger is one of the thinnest guys on the team. Somebody asked about the fly times for Clark, neither guy is tapered for this meet and nobody from Texas is shaved. Not sure why they did not taper. My son said that was the plan and then they changed to 4 days rest and “no shave December”. Vacek is red shirting so far but he got a b cut today in the 400im swimming “unattached”.

Texas did use Clark Smith in the 100 fly, he went 49.44. Better swim in the 500 at 4:23. Obviously Texas and USC are not using this meet as a full qualification meet, they had some of the their better swimmers doubling up this morning (for Texas, Conger and Smith in the fly and 500, Ellis and Murray in the fly and 50, Glass and Licon in the fly and IM; for USC, basically everybody besides Quintero and Stumph swam two events.) Yes, I know that the 100 fly and either 200 IM or 50 free are common schedules at conference/NCAAs because the fly is usually the second day, but still, if you were trying to give your best attempt… Read more »

Ooops, got post-ninja’d. Not trying to pile on.

You’re right. Expected him to be under 49, so that’s as far as I looked for his name. Corrected above.