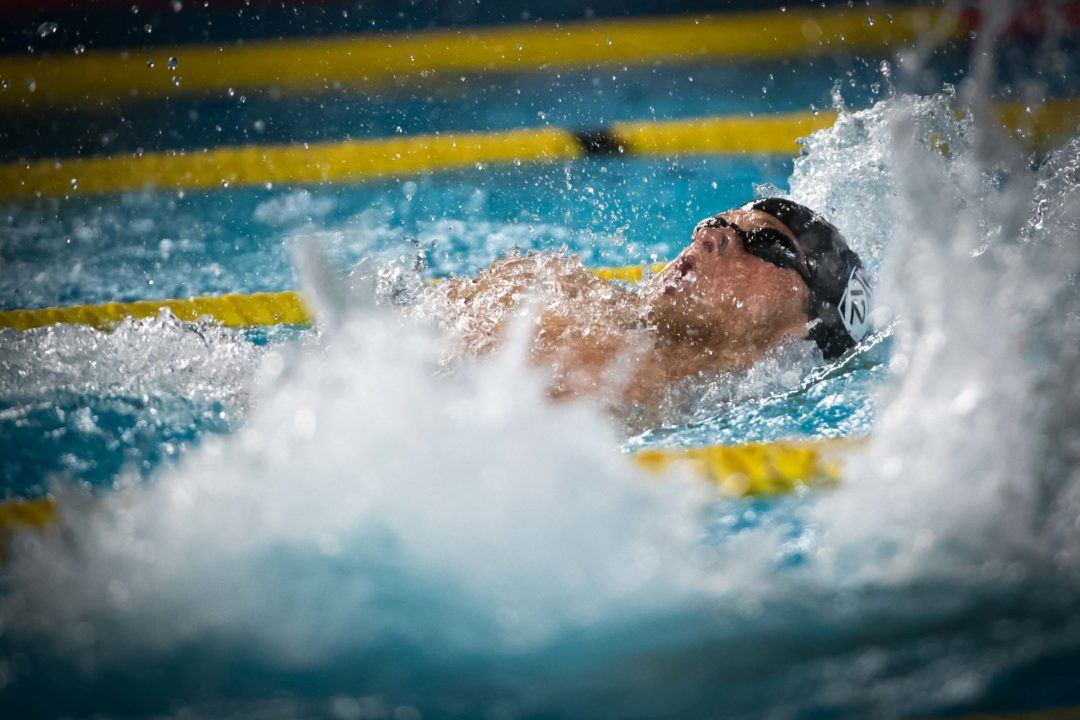 Patrick Mulcare hasn't scored a point yet individually for USC at Pac-12s. He'll swim his best event, the 200 back, on Saturday. Archive photo via Mike Lewis/Ola Vista Photography

On the final day of the 2019 Pac-12 Championships, once again it is the Cal men who did most of the over-entering and therefore most of the scratching. In continuing to track the schedule of the team’s star, senior Andrew Seliskar, he has dropped the 200 fly in favor of the 200 breaststroke, where he’s the Meet Record holder, on Saturday. He would have been the 3rd seed in the 200 fly.

The Cal men on Friday evening, with 16 A-finalists, overcame the diving advantage of Stanford and opened up a huge lead in the team standings. It would take a total collapse for them to be caught at this point. In spite of Arizona looking like they were creeping closer to Stanford, they actually lost 19 points on net to the Cardinal on day 3, and the Cardinal should be safely in that 2nd-place position.

In fact, all 6 spots should be locked-up (though the battle for 5th would be a lot more interesting were it not for a DQ’ed Utah relay on day 1.

Among the swimmers who are racing on Saturday is USC senior Patrick Mulcare. He hasn’t been in a scoring heat so far in this meet, but has the 200 back, his best event, on Saturday. He’s the top seed, and with full lumberjack beard in tow, a win would bookend his career with a matching Pac-12 title for the one he won in 2016 as a freshman (while Ryan Murphy and Jacob Pebley had skipped Pac-12s to race a Pro Swim Series meet instead).

Gotta feel for Mike Thomas and that 2020 fly. Also, is he the most underrated swimmer in the NCAA right now? 3:37 IM and 1:39 fly but I feel like he’s under the radar for most people.

Cause he swims on the same team as Seli

Exactly, swimmers should spread out and even playing field