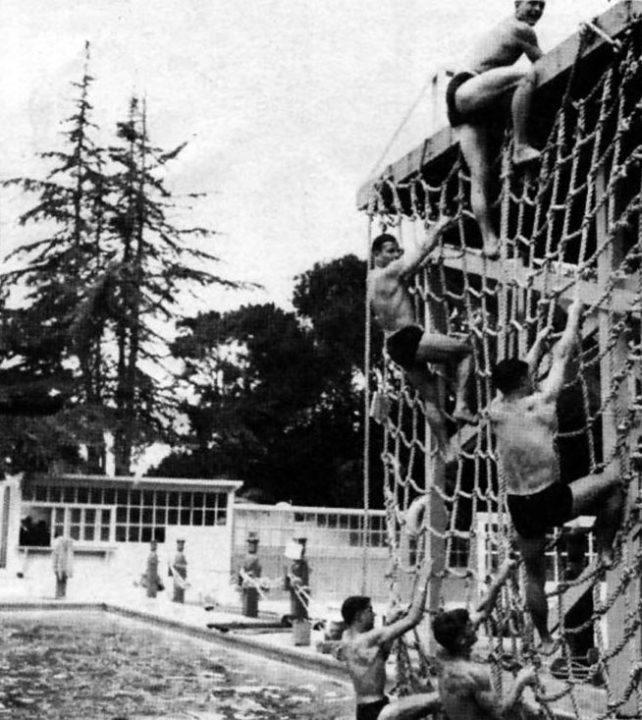 When Pearl Harbor was bombed in 1941, most Americans did not know how to swim. That fateful December morning, the future of swimming changed when the war moved from the sea to the skies. Current photo via Courtesy of Dudley Knox Library, Naval Postgraduate School

How beginning with summer league helped a young swimmer find a passion that has carried her all the way up to the start of university.

Confessions of a Helicopter Swim Mom

As helicopter moms, we must retire our wings, but we can still walk beside our children as their biggest fan on solid ground.

This story originally appeared in the September 2018 issue of SwimSwam Magazine. You can still subscribe to get the 2018 issue here.

When Pearl Harbor was bombed in 1941, most Americans did not know how to swim. That fateful December morning, the future of swimming changed when the war moved from the sea to the skies.

Facing a severe pilot shortage, every aerial branch of the U.S. military ramped up its recruiting and training to get aviators in the sky. One of the most rugged and glamorous training routes was the V-5 Naval Aviation Cadet Training Program, an elite program that cranked out Top Gun Navy flyers by the thousands.

Swimming was a life-and-death skill for pilots flying combat missions over the ocean, but according to a U.S. Navy outdoor-survival instructor, more than half of the incoming Pre-Flight cadets could not swim when they shipped into training. In fact, the Navy discovered that 75 percent of its pilots shot or forced down came down alive, yet barely 5 percent of those men survived because they could not swim or find food and water on islands and unfamiliar terrain.

In modern times, one might imagine Michael Phelps and coach Bob Bowman on pool decks to help flyers gain skills to survive bailouts and crash landings over large bodies of water.

For 90 days, cadets tackled navigational academics, gunnery, and the most difficult physical training on earth before they got behind the controls of the military’s most powerful warplanes. According to Ivan Fleser, 98, a former cadet from Marshall, Michigan, “swimming was the most difficult course at Pre-Flight,” which weeded out about a quarter of its cadets. Several trainees died and drowned in this ground-training program — but in a wartime setting, the harsh discipline and risks made sense.

During the war, Lt. Peter Fick — who broke Johnny Weissmuller’s freestyle records — coached American pilots after he missed out on wartime Olympics. Another Pre-Flight coach was Lt. “King” Johnny Miller, a Princeton University swimmer who turned Mercersburg Academy into a swimming dynasty. Before the war, Miller was profiled in Life magazine as the first coach to incorporate cross-training methods with weights and other dryland exercises used by pilots and swimmers to this day.

The Navy Pre-Flight swimming course required cadets to swim one mile and dive 50 feet underwater to escape bullets and suction from sinking aircraft. “Sink easy” cadets who could not stay afloat found themselves diving from platforms into pools lit by burning oil in a matter of weeks. Cadets also endured the Dilbert Dunker, a mock cockpit famously featured in “An Officer and a Gentleman,” that teaches pilots to escape from a submerged plane.

“I would not go through Pre-Flight again for a million dollars, but I would not trade the experience for ten million.”

— Ed McMahon, the “Tonight Show” entertainer who trained at Pre-Flight in 1943 and became a decorated Marine Corps fighter pilot in WWII and Korea.

Because 80 percent of these seaborne pilots could expect to land on water in battle, training focused on endurance and the ability to stay afloat for hours in rough waters until pilots were rescued. To boost morale, Pre-Flight swimming and water polo teams faced powerhouse swimming colleges like Stanford and other military bases like Camp Lejeune. Records posted in 1944 at the St. Mary’s College Pre-Flight School in Moraga, California, were 24.3 and 55.2 for the 50- and 100-yard free, 23 minutes for the mile, 13.6 for the 25-yard underwater swim, and 20.8 for the 25-yard carry swim, where cadets carried men in rescue drills.

Roughly 80,000 cadets and more than 1,000 coaches cycled through these schools during the war. This storied Pre-Flight training culture included “The Greatest Hitter Who Ever Lived, the Red Sox slugger Ted Williams; the astronauts Scott Carpenter and Sen. John Glenn, Williams’s wingman during the Korean War; Presidents George H.W. Bush (one of the youngest cadets to enter the program) and Lt. Gerald R. Ford, who coached Pre-Flight swimming; Paul “Bear” Bryant and Notre Dame’s Jim Crowley, one of the “Four Horsemen,” who coached football; and John Wooden, UCLA’s “Wizard of Westwood,” who coached basketball.

In the words of one athletic instructor, the Navy turned out trainees as “trim as rocks … alert, eager, aggressive … physical and mental TIGERS.” At the St. Mary’s V-5 Pre-Flight School, cadets completed enough training to travel 200,000 miles, or about eight around the world at the equator. More than 75 years later, the results of this pilot training experiment left an indelible watermark on the sport of swimming and national water safety, as Red Cross life-saving courses made their way into schools and community pools after the war.

Anne Raugh Keene is the author of “The Cloudbuster Nine: The Untold Story of Ted Williams and the Baseball Team That Helped Win World War II,” chosen by Newsday magazine as one of the 12 baseball titles to read for the 2018 season. Keene is the granddaughter of the Eastern Seaboard Navy Pre-Flight base commander and daughter of the batboy for the Cloudbuster baseball team, manned by players who wore jerseys for nearly every major league team from the Boston Red Sox to the New York Yankees. Keene is a Master’s swimmer at Longhorn Aquatics in Austin, Texas. She is pictured in the cockpit of a restored 1946 Piper Cub. To order the book and view more WWII images, see AnneRKeene.com.

Thank you for this marvelous story!

Over the past several years, I have come to know a long time masters swimmer who became a close friend of Adolph Kiefer. Search on Adolph’s name to see how he meshes into this story.

Look at the “in the navy” section.
https://en.m.wikipedia.org/wiki/Adolph_Kiefer

yes, I was really surprised to not see his name come up, he really is the main character in this amazing story. RIP