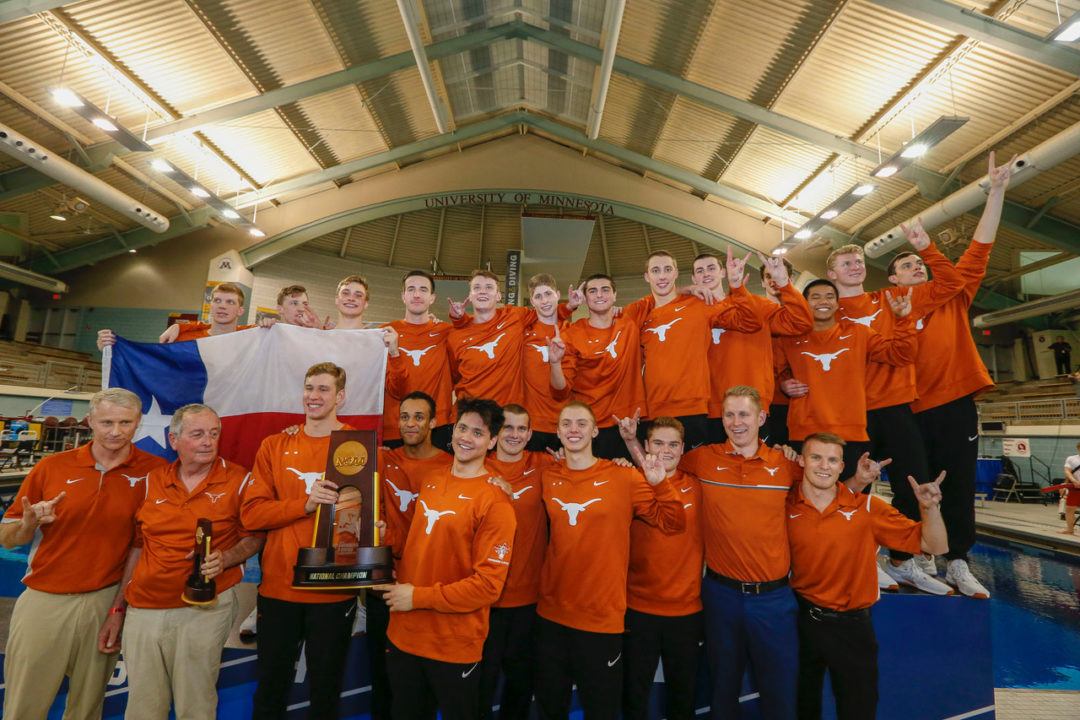 The Texas men's swimming & diving team will be battle-tested in the regular season before attempting a 5th-straight NCAA title in March. Archive photo via Tim Binning/TheSwimPictures.com

The 4-time defending NCAA Men’s Swimming & Diving Champion Texas Longhorns have announced their 2018-2019 schedule, which will kick off on September 28th with the intrasquad Orange & White meet.

Their first intercollegiate competition will be a two-day tri with Indiana and Florida on October 19th, and 20th. This marks the 4th-straight season that the three teams have participated in the early-season tri meet, with this year being Texas’ turn to host at the Jamail Texas Swimming Center – which will also host both the men’s and women’s NCAA Championships in March.

It will be a very light fall semester for the Longhorn swimmers – they’ll next race a dual meet against long-time rivals Texas A&M in Austin and then face another SEC opponent Tennessee in Knoxville before hosting the Hall of Fame Invitational from November 28th-December 1st. For now, that meet is scheduled to include Texas, USC, Arizona, Wisconsin, Harvard, and the men’s program from Stanford. There’s a few good storylines in there, including:

Texas’ spring semester gets a little busier, and has a heavy SEC tint, as they’ll travel to race Auburn (with new head coach Gary Taylor) and Georgia in mid-January. , they then wrap the regular season with a two-day dual at home against NC State and Arizona.

Update: Texas lists the Austin PSS on their schedule, which has traditionally been the January meet of the series, but this year that meet will go to Knoxville instead.

The best in the country will then return to Austin for the NCAA Championships, which will be held from March 27th-30th.

Texas has no dual meets this year against Big 12 foes TCU or West Virginia; also dropping off the schedule is Arizona State, who Texas swam last year as part of their trip to the desert to race Arizona.

Team’s that scored at NCAAs last year that Texas will race in the regular season this year:

The Longhorns graduated a big class, that includes Jonathan Roberts, Brett Ringgold, and 12-time NCAA Champion Joseph Schooling, but also bring in the top-ranked recruiting class in the country. A full preview of the Texas men’s team this season will be out later this week.

I think Texas has a 2 day Tri with N.C. state and Arizona not two separate duels with Arizona.

The other time they see Arizona is at the Hall of Fame Invitational. That + dual = 2.

So will everyone freak out when Texas swims slowly at these meets? Past results say yes

This is not a competition schedule. It’s s practice schedule. Texas has no intention in winning any of these meets. If Texas wins a dual meet, the other team must be really bad. Texas always shows up come March escpecially when it’s a home meet for them.

I know you were trying to make fun of Texas fans here with this post, so I am not really replying to you. Here is what I know: Texas wants to win EVERY dual meet, but they will not change their practice plan for NCAAs just so they can win a dual. Texas care very much about Texas Invitational in December and tries to make as many sure NCAA cuts as possible, Swimmers that do not make cuts, or not sure they made cuts, will taper for Big 12s too. The rest of sure qualifiers will not. So, you can say, Texas cares about NCAA cuts, not duals, really. Only one meet counts for the old man.

again, Texas swimming was still very good obviously. But they are not as dominant as they used to be in the pool. Texas Diving however is taking care the business.

I’m talking based of points scored at NCAA

Texas was definitely off last year. Most of the time they are contesting every relay. Last years relays for Texas were awful by Texas standards. 3-4-4-5-9th place finishes. Diving saved the day. Eddie was smart enough to recognize the swimming weakness and brought in some stud divers.

Alberio said the same thing about his dual meets on the USA swim pod he was just on. Basically said he loves dual meets but the women’s team was 1-7 in Duals last year, Commerford barely won any races and he wouldn’t sacrifice anything for the end goals, IE March.

To be fair, they were not as Texas impressive at last year’s NCAA meet. In facts, when was the last time Texas got outscored in swimming at NCAA meet? Cal and NC State were most impressive in the water. Texas and IU were the better complete swimming AND diving teams.

Last year, it was rightfully so. Aside from a few standouts, most of the Texas team swam poorly by their own standards at NCAAs. They just had overwhelming talent, and so it was enough to win anyway.